The hide and the hubris of this Muselputz is hard to stomach. We can only hope that Putin will give him a taste of his own medicine. 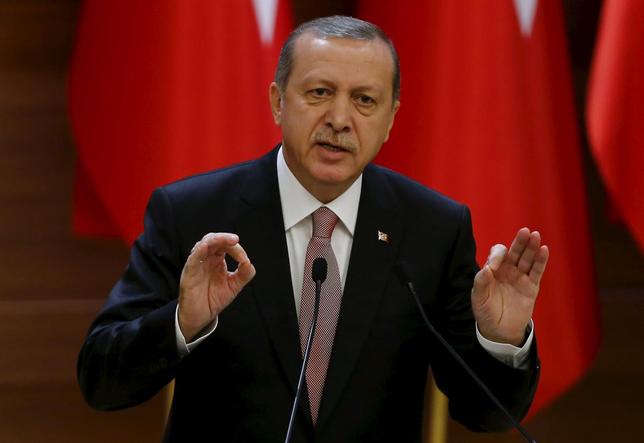 Turkish President Tayyip Erdogan makes a speech during his meeting with mukhtars at the Presidential Palace in Ankara, Turkey, November 26, 2015. —REUTERS/UMIT BEKTAS

Russia should apologise for violating Turkey’s airspace, Turkish President Tayyip Erdogan was quoted as saying on Thursday, days after a Russian jet was shot down near the Syria border.

“Those who violated our airspace are the ones who need to apologise,” Erdogan was quoted as saying on the CNN website.

“Our pilots and our armed forces, they simply fulfilled their duties, which consisted of responding to … violations of the rules of engagement. I think this is the essence.”

‘They know how it’s done’:
Turkish claims that the downed Russian Su-24 jet “violated” its airspace have sparked outrage among Greeks, who took to social media to say it is a clear-cut…RT.COM

Check out the latest from Turkey’s aspiring sultan: When asked what would happen if Russia shot down a Turkish jet that strayed into Syrian airspace, Turkey’s…
RUSSIA-INSIDER.COM

A world leader is finally saying what we have been reporting since the election of Recep Tayyip Erdoğan to Prime Minister of Turkey (and now President). Erdogan…See More

3 thoughts on “Erdogan: Russia should apologise!”