A few weeks before Syed Farook went on his ritual killing spree in San Bernardino, he got into an argument about Islam with one of the co-workers he later murdered. 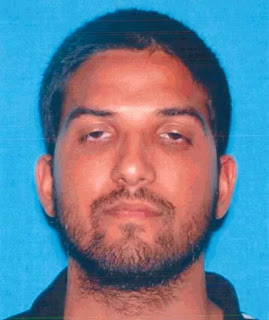 The co-worker said that Islam wasn’t peaceful. Farook said it was.

Like most Islamic theological arguments, this was one was settled with bombs and bullets.

The motive is officially still unknown. Obama said it might be terrorism or a workplace thing. His laughably corrupt Attorney General, Loretta Lynch said, “We don’t know if this was workplace rage or something larger or a combination of both.”

The kind of workplace rage that leads a couple to assemble a small army’s worth of firepower, some bombs and tactical gear, destroy their cell phones and carry out a massacre all within 20 minutes.

This story is brought to you by the same people who insisted that the assault on the Benghazi compound conducted with heavy firepower was really a spontaneous movie review.

Farook’s father said, “He was very religious. He would go to work, come back, go to pray, come back.” Neighbors say that he “grew a beard and started to wear religious clothing. The long shirt that’s like a dress and the cap on his head.” Neighbors noticed something was wrong, but they were afraid to “profile” him. That might be Islamophobic. And it’s better to let Americans die than be thought a bigot. That’s the policy in Washington D.C. and over in the Redlands in California.

So his motive remains a mystery wrapped in an enigma and tucked inside an IED. We could speculate, but that would be Islamophobic. All we can do is shoot back once the latest perpetrators of workplace violence have killed enough people that killing them no longer seems disproportionate.

Farook, as his dating profile said, came from a “religios but modern family of 4”. And you can tell they were modern because they used guns, not swords.

When the Redlands Tea Party Patriots objected to the resettling of Syrian Muslim migrants in their community, CAIR accused them of “paranoia and phobia is rooted in a combination of ignorance and bigotry.”

But “paranoia and phobia” are the modern condition that the free world has found itself living in. Islamic terrorism can strike anytime and anywhere from a Paris concert hall to a San Bernardino County facility where disabled children were being helped. It’s ignorance to ignore that and bigotry to defend it.

It was a good question. As the country watched police charge towards a home in the Redlands, it has become an even better question.

Everything possible was done to deny Nidal Hassan’s terrorist motivations in the Fort Hood Massacre. His attack was deemed workplace violence. Even his own attempts to explain that he supported the terrorists were shut down so that he was reduced to smuggling messages to get his story out.

And despite multiple statements by Hassan that he was a terrorist, the official story is still workplace violence. Right after the shooting, it was some strain of airborne PTSD that had somehow transmitted itself from American veterans to the Muslim employee who had never seen combat until he began killing them.

There are always excuses.

Obama and the media would like to make this story about “gun violence”. But guns don’t shoot themselves. There is a hand that pulls the trigger and a mind whose foul purposes that hand serves.

Behind each massacre, there is a mind. And it is that mind, its ideas and its beliefs, that kills.

San Bernardino is home to what is described as a “growing Muslim population” and that growth comes with terrifying growing pains.

This latest attack appears to be one of them.

It’s a matter of simple math that as the population most likely to commit terrorist acts increases, so do the acts themselves.

Two months ago, Marilyn Snyder of the Redlands Tea Party Patriots wrote of “the runners and spectators of the Boston Marathon who never imagined that refugee jihadists were stealthily plotting their demise — just because they were not Muslims.”

Most people in San Bernardino County did not expect that anyone was plotting to kill them. They did not think that one evening the events from far-off France would suddenly be taking place where they lived. And yet that is the new reality.

“While it is impossible to prevent death delivered by madmen who kill because of religious extremism, it is possible to put in place federal policies that limit the influx of Muslim extremists through the wide-open refugee doors of the Obama administration,” Marilyn wrote.

Sayeed Farouk, like Nidal Hassan, did not suddenly fly over here from Syria. But that only makes it more vital that we prevent the next attack and the next massacre by closing the doors and keeping our country safe.

We cannot bring back the dead, the victims of the long horrifying roll of Islamic terror that stretches back for thousands of years, but we can protect the living.

The left approaches this as a mechanical problem, but it’s an ideological problem. It’s a conflict between two sets of ideas and two sets of worldviews. It is a war between those who believe that men must be ruled by the dead will of Mohammed and his brutal successors and those of us who believe in the freedom of our founding documents and the right to life, liberty and the pursuit of happiness.

It is not a war that we will win through appeasement or disarmament. And we can begin to fight back by protecting ourselves and our country.

“We Redlanders and all Americans need to stand up with “common sense and judgment” with an emphatic “No!” to Syrian refugee resettlement. It’s time to bar the doors against jihadi infiltration,” Marilyn wrote.

From Redland to Paris, it’s time that we did the right thing, for our towns, our cities and our country.

2 thoughts on “Protecting Ourselves From the Next Peaceful Massacre”