Just a reminder. One of the saddest highlights of 2015:

Pamela Geller: The West Has Lost the Will to Live 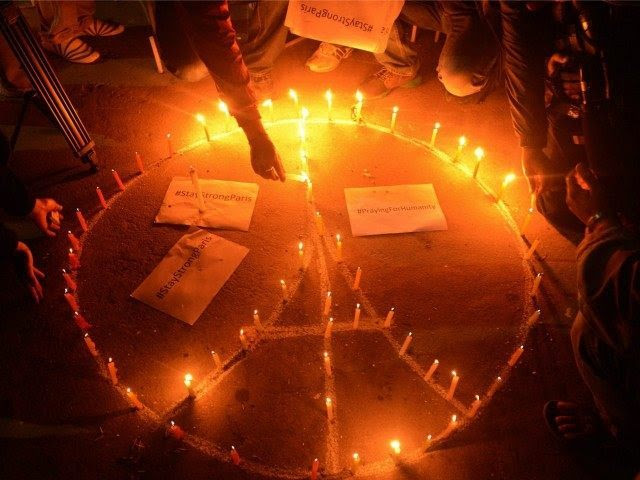 The most basic, primitive honor a nation owes to its dead is to fight to defend itself—to defeat the enemy and win. And yet the West won’t.

The West is hanging on by a thread and doesn’t even know it. We are living off the fumes of the accomplishments of our forefathers and those who fought and died in the cause of freedom and individual rights. But the thread is wearing thin. Time is just about running out.

After the murderous jihad attacks in Paris comes the predictable Western response: not resolute self-defense, but weepy candlelight vigils, protestations of unity, and hashtags. After the jihad attacks in Garland, Texas, Chattanooga, the University of California Merced, and scores of arrests of American Muslims working for ISIS (the FBI has 900 ISIS-related investigations currently ongoing), our top priority should be to crush the enemy.

Instead, we get pathos and pitiful memes. NBC reported: “Paris residents were using the hashtag #PorteOuverte (French for ‘open door’) on Twitt,er to offer safe haven to strangers stranded after a string of deadly attacks Friday night.” Everyone is congratulating himself over this hashtag. “Twitter users in other countries,” NBC added, “also began using the hashtag to share their delight that social media was being used for a good cause”—colossal stupidity.

“Share their delight?” This delight is misplaced. I would expect nothing less than that Parisians should offer safe haven: just because savages are at war with us doesn’t mean that we should be less human.

This hashtag is just the latest in an endless stream of manifestations of the sophomoric, embarrassing, preening self-indulgence that is endemic in our sick culture. It is reminiscent of “Boston Strong”: Really? How? After the Boston Marathon jihad bombings, the media and Boston elites refused to call the attack jihad. The Boston city government refused repeatedly to run our American Freedom Defense Initiative (AFDI) counter-jihad ads, but run vicious Jew-hatred ads regularly. We are en route to the Supreme Court compelling Boston to run our ads. What’s strong about Boston? What stand did Boston take against jihad?

Equally revolting is the Eiffel Tower peace symbol that is circulating around. Do the leftists think the ISIS jihadis will see this and lay down their arms? If the Christians and Yazidis in Syria make the peace sign, will all be well? If the kidnapped schoolgirls—now sex slaves—make the peace sign, will they be freed? Such idiocy is an affront to every freedom-loving human being.

The endless patting ourselves on the back that citizens of Western countries engage in after a mass slaughter by jihadists is disgusting. People are crowing about hashtags and blood donations as if this is somehow new. Of course we care. We always care. That is our value system, that is a Western value. The United States of America is the most charitable nation on earth. That is who we are—although when Obama speaks about universal values, G-d only knows which ones he is talking about: those of the West or those of Sharia.

What no one is talking about is taking on these savages. That is what is so morally depraved about our response. The idea that we’re not allowed to take the appropriate measures to defeat the Islamic State is obscene. The idea that the United States of America cannot defeat the Islamic State or al-Qaeda is absurd, and the whole world knows it. But we choose not to use our strength. We choose to be victims. It’s shameful.

And clearly, since everybody knows that we are not physically weak, where is the basic dignity that any nation should have, to stand up for its own values? If nothing else, when we find ourselves involved in a war, we should fight it and finish it. You either win or you will be defeated.

Obama has aligned with the jihad force. In Syria, Egypt and Libya, and worst of all, now Iraq. He has blood on his hands. He has the blood of hundreds of thousands of Christians, the blood of our soldiers. By abandoning Iraq, he takes on his hands the death of every soldier who gave life and limb in Iraq to defend this country. Whether you agreed with the Iraq war or not, we did it. We went in and asked the native population to help us. You cannot just withdraw and abandon those people.

Is it proper for us to defend ourselves and to take the appropriate action to defend this country? Of course. One of Obama’s historic crimes is that he allowed our superiority to deteriorate. But that doesn’t mean our enemies have disappeared, or that we cannot or should not defend ourselves against them. Just hours after Obama insisted that he had contained the “Junior Varsity team” ISIS, they laid siege to Paris. And this goes unchallenged.

When Muslims attack, the left attacks us. MSNBC, the Guardian, and Salon all ran pieces blaming the “right-wing” for the Paris attacks. Outrageous, but not surprising. The enemedia is aligned with the jihad force. As the jihad heats up in the West, the media is becoming more clumsy and desperate in its attempts to deflect attention away from the jihad and back to its favorite bogeyman, “right-wing extremists.” Now, even when the evidence of Islamic jihad responsibility is everywhere, as it is with the Paris attacks, “journalists” still find ways to put the blame on the “right-wing” that they hate far more than they do bloodthirsty jihadis, whom they don’t dislike at all.

If you have an ounce of self-esteem, when someone comes at you with a gun, you answer with force. If he is out to destroy you, you owe it to yourself to defend yourself. We need to understand that the left is as dangerous, if not more so, than the suicide bomber, for obscuring this basic fact—because leftists have the legitimacy of the mainstream, the imprimatur of respectability, and they wield this spurious legitimacy like a club to destroy all opposition to their totalitarianism.

We need to go to war against the left. We have to get that into our heads. We have to accept that terrible reality. They want to destroy our freedom. They want to destroy our country. They want to steal our children. That’s war. There is no one on the right who has the correct philosophy about this. The left demands the right to lie, and they are lying to the American people on a massive scale, even to the extent of making people think there is something wrong with loving and defending our nation.

The idea that the Paris attacks happened on the eve of a global conference, not on the gravest threat to freedom, not on the global jihad, but on climate change, speaks to how unreal and sick we are as rational beings. Even worse, as if that weren’t bad enough, you have a presidential candidate saying that climate change is responsible for terrorism. And the very serious talking heads in the mainstream media are reporting this with a straight face.

The fact is, global jihadists, whether they’re ISIS or al-Qaeda or Hamas or Hezbollah, are monstrous aggressors. We don’t have to wait for the first sign that they are attacking; they have declared war against us. They must be destroyed. We can’t complain about what we should or shouldn’t be doing, we have to correct it. This idea of containment, as Obama claimed the other day to have “contained” ISIS, is absurd—an intermediate state.

There is no intermediate state. It’s either/or. This is war. We have to fight it.

Pamela Geller is the President of the American Freedom Defense Initiative (AFDI), publisher ofPamelaGeller.com and author of The Post-American Presidency: The Obama Administration’s War on America and Stop the Islamization of America: A Practical Guide to the Resistance. Follow her on Twitter here. Like her on Facebook here.

Mona Gaballah, a Coptic woman who was elected to Egypt’s parliament late last year, meets with Father Samaan at the Monastery of St. Simon the Tanner, Cairo, April 22, 2015 (FACEBOOK/The Campaign to Support Mona Gaballah for Parliament).CAIRO — Becoming a member of parliament as the first Coptic woman to win an individual seat representing a district known for its tribalism and intolerance was a difficult feat. Mona Gaballah succeeded in entering the annals of Egyptian parliamentary history as the first Coptic woman to represent the al-Jamaliah and Manshiyat Nasser district.

Ahead of a meeting with German President Joachim Gauch, Greece’s president, Prokopis Pavlopoulos, on Monday accused neighboring country Turkey of aggravating the refugee crisis, which has overwhelmed authorities in both Greece and Germany.
005 01/18/2016 A Gruesome Christmas Under Islam

Left: The Miami restaurant was bombed by the Islamic State, one of three Assyrian-owned restaurants bombed in Qamishli, Syria on December 30, killing 16 people. Right: A number of youths set fire to a Christmas tree in a public square in Brussels, Belgium, while yelling “Allahu Akbar” [“Allah is Greater”].On Christmas Day in the West Bank, two Muslims were arrested for setting a Christmas tree on fire in a Christian-majority village near Jenin. On the same day in Bethlehem, Muslim rioters greeted the Latin Patriarch of Jerusalem with a hail of stones. Authorities subsequently arrested 16 “Salafi radicals” who were planning to carry out terror attacks against tourists celebrating Christmas.

Kurdish militants have detonated a roadside bomb in the southeastern province of Sirnak, killing three police officers and wounding four others in an armoured vehicle.
008 01/18/2016 Hijab in the US Navy

As I look at the photos of the American sailors captured by Iran, many things about the entire incident vie for my attention.

The beginning of 2016 in Europe saw the collision of two problems that have long been left to run their course undisturbed. Making allowances for human-rights abusers in order to avoid causing offense is, after all, nothing new here in Europe. Neither is our often well-meaning refusal to question the potential impact of welcoming record levels of migrants to our societies.
010 01/18/2016 The Problem With Islam Is Aggressive Scripture, Not Aggressive ‘Traditionalism’

On the Corner this week, the eminent Jim Talent touted (with some reservations) an essay about “moderate Islam” by Cheryl Bernard. A Rand Institute researcher, she is also a novelist, a defender of war-ravaged cultures, and the wife of Zalmay Khalilzad, the former U.S. ambassador to post-Taliban (or is it pre-Taliban?) Afghanistan. With due respect to Dr. Bernard, who does much heroic work, I believe the essay highlights what is wrong with Western academic analysis of Islam.