Things You Can’t Say in Denmark

“…The ideology of Islam is every bit as loathsome, nauseating, oppressive and dehumanizing as Nazism. The massive immigration of Islamists into Denmark is the most devastating event Danish society has suffered in recent historical times.” Story at Gates of Vienna. …Read More… (Full article below the fold)

“Treason” In Turkey: Asking for Peace

The Turkish state authorities have made it clear that calling for an end to state violence in Turkey’s Kurdish regions is “treason.” This means that in Turkey, requesting peace and political equality between Kurds and Turks is illegal.
GATESTONEINSTITUTE|BY UZAY BULUT

A Jewish man in his 30s was stabbed a short time ago in crown heights, sources say. The stabbing happened at a check cashing center at Kingston Abe and Empire Boulevard. The man was stabbed in his …BEHINDTHENEWSISRAEL.

Both murder methods have been called for by Muslim clerics and in the “Palestinian” media. “Four wounded in car ramming, two in stabbing,” Arutz Sheva, February 13, 2016: Four Border Police officers were lightly wounded slightly before the end of Shabbat on Saturday evening, after a car driven by several Arab terrorists rammed into them […]JIHADWATCH.ORG|BY ROBERT SPENCER

The religion of love, peace, and tolerance.

(This video and article originally appeared at CIJNews.comand is reprinted with permission.)

In his speech to the Syrian refugees, Shaban Sherif Mady greeted them, emphasized the merits of the people of Greater Syria in the eyes of Allah for defeating the Crusaders and the Tatars, and ended with a supplication to Allah.

The following is an excerpt of the supplication (originally in Arabic):

“O Allah! Strengthen the mujahideen [jihad fighters in the path of Allah] everywhere, make their hearts firm and strong, let them hit their targets, give them victory over their enemies.

“O Allah! Destroy your enemies, the enemies of religion [Islam].

“O Allah! Whoever wishes good for Islam and the Muslims, bestow all goodness upon him.

Continued, Denmark, where Islam is now a race:

If anyone “incites hatred”, “discriminates”, or otherwise does bad things towards “a religion”, it is the same as if he had done it towards a race. Even if the Danish court didn’t cite the UN, the new definition of “racism” is lurking there in the background.

The left will do anything to gag the right, the main, rational opposition to their insane cause. The ‘racist’, and ‘far right’ labels must gradually be extended until conservatism itself is no longer viable, and it is working.

The sooner we declare islam NOT a religion, the better.

I must point out that the city of Elsinore, in which this odious judgment was handed down, is the same that prompted Marcellus to say (in Hamlet): “Something is rotten in the state of Denmark.” To add insult to injury, the legendary Holger Danske, the Danish hero who will awaken to save his country in its time of greatest need, sleeps in the cellars of Kronborg Castle at Elsinore. Surely at least one of Holger’s eyes is now blinking open …?

Many thanks to Liberty DK for translating this article from Jyllands-Posten. A slightly different version was published earlier at Vlad Tepes:

The court in Elsinore has sentenced a man fined for comparing Islam with Nazism.

“…The ideology of Islam is every bit as loathsome, nauseating, oppressive and dehumanizing as Nazism. The massive immigration of Islamists into Denmark is the most devastating event Danish society has suffered in recent historical times.”

Thursday morning these words cost Flemming Nielsen 1,600 kroner. He was sentenced to four day-fines of 400 kroner for violating the Penal Code §266b paragraph 1, also called the racism paragraph. This is from a judgment rendered by a Court in Elsinore.

The accused, Flemming Nielsen, had written the words on Facebook in late November 2013. 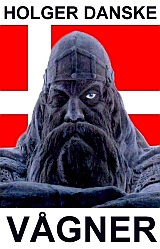 “I did not violate the article I have been accused of. I did not mention the religion of Islam or Muslims with one word. I referred to Islamists and the ideology of Islam,” said Flemming Nielsen to TV2.dk immediately after the verdict.

It would therefore be obvious that Flemming Nielsen should be able to appeal the verdict, which he believes has restricted his freedom of expression, to a higher court.

However, he will not be able to do this as the fine falls below the minimum limit by which such judgments can be appealed.

Flemming Nielsen wrote the words as a comment on a post that one of his friends had posted on social media regarding a residents’ association where the board had been overthrown by members of the extremist Muslim association Hizb ut-Tahrir.

The Elsinore Court claimed in its judgment that Flemming Nielsen had written in general about all Muslims, not Islamists in the narrower sense, as the convicted claimed.

‘The Court has in this context interpreted the “ideology of Islam” as relating to Islam in general and not only to the extreme part of Islam.

But it is a dangerous expansion of the racism paragraph the Court of Elsinore potentially has made, says Jacob Mchangama, director of the legal think tank Justitia.

“Thus, the Court in Elsinore has taken a major step towards expanding the racism paragraph to constitute a kind of blasphemy clause which indirectly protects religions from insult. We have otherwise rejected this in this country, given that no one has been convicted of blasphemy since 1946,” writes Mchangama in his blog in Berlingske’s website.

It’s worth noting that fighting the “Islam is not a race” battle is pretty much futile at this point. A number of years ago (I don’t remember the date, it might have been 2009) the UN approved an expanded definition of “racism” promoted by the OIC. If anyone “incites hatred”, “discriminates”, or otherwise does bad things towards “a religion”, it is the same as if he had done it towards a race. Even if the Danish court didn’t cite the UN, the new definition of “racism” is lurking there in the background.