Copy and paste the above header in you browser and see what comes up. There must be at least 10 articles in the lame stream media with that or similar headers, but when you  try to post it into your blog, it miraculously changes to  all kinds of other captions.

Only CBC News remains with the original caption. Turkey on Monday demanded an additional 3 billion euros from the European Union to help deal with the refugee crisis as EU leaders appealed to Ankara to take back thousands of migrants and prevent others from setting off for Europe.

Turkey — a temporary home to an estimated 2.75 million refugees, many from the conflict in Syria — is an indispensable EU partner in trying to dissuade people fleeing conflict or poverty from taking to makeshift boats and making the short but often-dangerous trip across the Aegean Sea.

“To avoid that refugees arrive in Greece we have to co-operate with Turkey,” French President Francois Hollande said as he arrived for the EU-Turkey summit in Brussels.

But Turkish leaders upped the ante on Monday, demanding the additional funds by 2018, on top of 3 billion euros the EU had already pledged to help Syrian refugees in the country, European Parliament President Martin Schulz said. Turkey also made requests to ease visa rules by June instead of the end of the year. 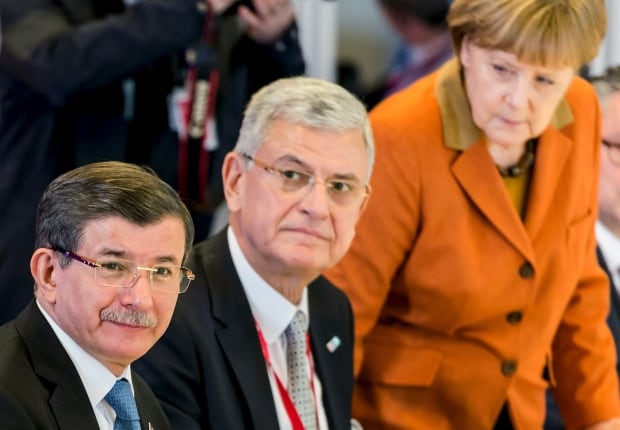 Turkey also wants to be able to send Syrian refugees to the 28-nation EU as they take people back who have made the crossing into Greece. The EU is desperate to halt the flow of migrants crossing the Aegean Sea. NATO ships are also set to help patrol the sea between Greece and Turkey, easing the load on Turkey’s military-run coast guard.

Turkey says this summit is as much about its thwarted EU membership ambitions as Europe’s inability to manage the refugee emergency. The membership talks have dragged on for a decade and Ankara is looking for improved negotiating conditions.

“Turkey is ready to work with the EU, and Turkey is ready to be a member of the EU as well,” Prime Minister Ahmet Davutoglu told reporters, expressing hope that the talks “will be a success story and a turning point in our relations.”

A planned news conference with Davutoglu was cancelled after the Turks made new demands. They are expected to be discussed over a dinner, which was added to the summit program.

In Ankara, Turkish President Recep Tayyip Erdogan accused the EU of failing to deliver on the refugee fund and criticized the Europeans for refusing to take in more refugees.

“We are not sending them. They are going (to Greece) by sea and many of them are dying. We have rescued close to 100,000 from the sea. Others are puncturing their boats and causing their deaths,” Erdogan said, in an address to women trade-unionists. 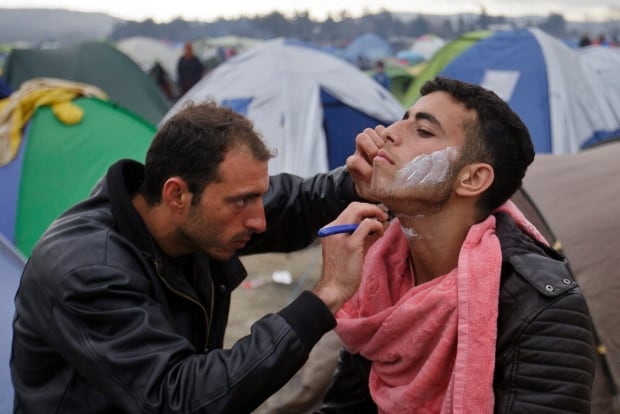 A barber shaves a migrant at the northern Greek border station of Idomeni, Monday. Greek police officials say Macedonian authorities have imposed further restrictions on refugees trying to cross the border, saying only those from cities they consider to be at war can enter. (Visar Kryeziu/Associated Press)

North of Greece, Macedonia has effectively sealed off the main route into the Balkans, allowing just a trickle of people through. The move — backed by Austria, Croatia, Serbia, Slovenia and Hungary — has ratcheted up pressure from the other side as Greek authorities don’t have enough shelter for those who are stranded.

Hundreds of thousands of people have used the route in recent months to try to reach preferred destinations like Germany or the countries of Scandinavia.

An estimated 13,000-14,000 people waited at Greece’s border with Macedonia on Monday hoping desperately to be allowed to cross.

“Whatever it takes. We will go. We have nothing to go back to. Our homes are destroyed,” said Lasgeen Hassan, who, with the rest of his Kurdish Syrian family, wants to reunite with relatives in Germany.

“We will need to bring relief to Turkey, and that means you have to be willing to take people in from Turkey” who are the most likely to qualify for asylum, he said.

Human rights group Amnesty International hit out at the leaders for using Turkey as a buffer to stop migrants, calling the move “a dangerous and deliberate ploy to shirk their responsibilities to people fleeing war and persecution.”

“Europe has an absolute duty to protect refugees and must make the bold decision to fast-track significant, unconditional resettlement as a matter of urgency,” said the group’s deputy director for Europe and Central Asia, Gauri van Gulik.

Ankara did little to allay concern about its rights record before the summit, when police on Friday stormed the headquarters of the Zaman opposition newspaper to enforce a court decision to place it and its sister outlets under the management of trustees. The step sparked two days of protests which police dispersed using tear gas and water cannons.

“Cooperation with Turkey does not mean that we have to accept anything,” Hollande said. “The press must be free everywhere, including in Turkey.”