“How is your Merkelsommer going?” asks Douglas Murray:

Britain’s geographical good fortune, relative success in limiting weapons and our justified scepticism of the undiscriminating “open borders” brigade mean we have so far been spared the delights of what Angela Merkel’s growing army of critics call her summer of terror …

It is now a fortnight since Mohamed Lahouaiej-Bouhlel shouted “Allahu Akbar” and ploughed a truck along the Nice seafront, killing 84.

The following Monday Muhammad Riyad, who said he was from Afghanistan but almost certainly came from Pakistan, screamed “Allahu Akbar” while hacking with an axe at his fellow passengers on a Bavarian train.

The next day Mohamed Boufarkouch shouted “Allahu Akbar” and stabbed a Frenchwoman and her three daughters (aged eight, 12 and 14) near Montpelier.

Mixing things up a little, that Friday’s shooter in Munich was a child of Iranians called Ali David Sonboly.

Skip forward a couple of days and a “Syrian asylum seeker” with a machete was hacking a pregnant woman to death in Stuttgart.

The next day another “Syrian asylum seeker”, Mohammad Daleel, carried out a suicide bombing outside a bar in Ansbach, Bavaria.

And a little over 24 hours later two men shouting the name of ISIS entered a church near Rouen during Mass, took the nuns and congregation hostage and slaughtered the priest with a knife.

That’s a lot of irritants for just one summer. Read on.

“Chancellor Merkel said she knows that Germans are worried about their personal safety: “We are doing everything humanly possible to ensure security in Germany,” she noted, but added, “Anxiety and fear cannot guide our political decisions.”

“The chancellor remains committed to her current course of action. A classic Merkel refrain follows: ‘There must be a thorough analysis.'” — Thomas Vitzthum, political editor of Die Welt.

“The country is split, its citizens deeply …

Chancellor Merkel said she knows that Germans are worried about their personal safety: “We are doing everything humanly possible to ensure security in Germany,” she noted, but added, “Anxiety and fear cannot guide our political decisions.”
GATESTONEINSTITUTE.ORG|BY SOEREN KERN
.

This has been planned long ago – checkout this article http://golden-dawn-international-newsroom.blogspot.com.au…

Last Sunday a Syrian culture-enricher ran amok with a machete in a restaurant in the German town of Reutlingen. Since then a number of rumors have circulated about the relationship between young Mohammed and the Polish woman that he killed. Below is a brief account from a German site that tries to set the record straight. It was drawn from Polish sources, and has been translated into English by Rembrandt Clancy. 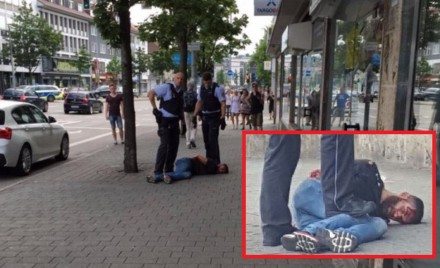 Machete Terror: The Wretched Lies of the German Media about the Murder in Reutlingen

Machete-Terror: The wretched lies from the German media about the murder in Reutlingen are coming slowly to light.

Here is a short summary of the facts from the Polish press.

The dead Polish woman, a single-parent mother, leaves behind two children. The youngest child is eight years old. The murdered woman had no relationship with the Syrian and he had not worked in the sandwich bar!

Three months ago she started work in the kebab snack bar as kitchen help in order to earn money for the family/the children. On Sunday she had just returned after visiting her family in Poland.