Believe it or not, religion central to Islamist radicalisation

Who’d have thought? For years we have been told that Islam has nothing to do with Islam, and that the radicals are nothing but misunderstanders of the religion who just haven’t read the Koran properly, in Arabic of course. Along comes a Muslim female who destroys this annoying  construct of lies in one fell swoop: 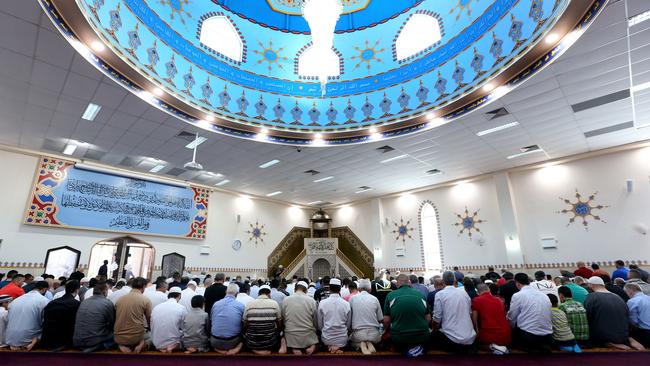 I am a Muslim female who was born in an Islamic country and lived most of my life in Australia. While Eastern culture and Islam are embedded in me, I also have embraced Western culture. Growing up in Pakistan, I experienced a cocktail of culture and ­religion that often created confusion, not just in me but for many people in Pakistan.

My view is that this confusion can be deliberate and often is wielded as a means of controlling the masses in Muslim society. These mechanisms of control flow from the heads of religion, the imams, to the people and are constantly leveraged by parents to scare the children into obedience and compliance.

When these people migrate to Australia, some of them use the same controls to shield themselves, their children and wider families from integrating into the mainstream Australian culture because it deviates so vastly from Muslim cultural values. Some migrants in the Muslim community become prisoners in their own homes, creating a sealed ecosystem for the sake of cultural and ­religious preservation.

Muslims can be proud and sensitive about their religion because Islam is not only a faith, but also a law, sharia law. It regulates all aspects of our lives, including economic and marital, and matters of state.

Many Muslim migrants experience Western culture as corrupt, threatening their cultural and ­religious heritage. This is why when Muslims migrate to the West they often become more conservative in their thinking than those in their homeland.

Western culture promotes freedom of expression, open relationships with parents, allows people to make their own choices and question what they don’t understand. Muslims are taught to conform, and it is this that implicitly drives some Muslim youth to follow the messages of the extremist groups without question.

Recent events in Australia such as the Lindt cafe siege and arrests on terror charges have brought the issue of radicalisation to national attention. Open the pages of major media publications and you’re likely to see a story on the rise of radicalisation and the government’s efforts to combat it. On the pages of social media the debate is even more pronounced, particularly among the Muslim community, many of whom perceive themselves as targets of government anti-terror measures.

Many of the government’s proposed measures for dealing with radicalisation and extremism are controversial, particularly in the Muslim community. The recent cabinet leaks regarding proposals to revoke the citizenship of Australians who fight overseas show that even senior government ranks are divided on the effectiveness and justness of some proposed measures. Human Rights Commissioner Gillian Triggs also has expressed concerns about the proposals.

However, many, including the Prime Minister, argue that tough measures are essential to tackle the problem before it becomes so large that it cannot be countered effectively.

It is clear the issue of radicalisation is of national prominence, but how well do the government, commentators and the public understand it? If we are to have a reasoned debate on the topic, we need a better understanding of what drives radicalisation.

My family migrated to Australia in 1985. A few years after migration, I was invited to attend a Muslim youth camp that was organised by the Lakemba and Melbourne mosques. The focus of the camp was to reinforce the faith of attendees in Wahhabi Islam. The strong message was that the Muslim youth at the camp represented traditional Islam and as a result were the “chosen ones”.

The message I heard at the camp was that Allah wanted the youth to be his ambassadors. Therefore, their duty was to change “corrupt society” by spreading the name of Allah. The young people were told that their jihad started first with them by living a pure life, then persuading others to follow the path that Allah chose for them.

Assimilating into the Australian way of life at that time was frowned upon. The parent and child relationship was never an open one, which made the youth camp, and other Islamic groupings, an outlet where young Muslims suddenly felt empowered. Similar Muslim youth camps are still run today.

Understanding these cultural differences is the key to countering the appeal of radicalisation. The vast majority of Muslims, nationally and internationally, don’t support terrorist organisations or their extreme views. However, there are people in all religions who take it further than others. Radicalisation is not a new trend. With or without the internet, it has been present in all religions throughout history. Therefore, we first need to understand why some Muslims are more susceptible to radicalisation, which seems to be spreading like a plague.

There has been extensive research seeking to understand Islamic State’s ideology and why it is attracting followers. Graeme Wood’s insightful piece in The Atlantic, “What ISIS Really Wants”, observes that “Islamic State is no mere collection of psychopaths. It is a religious group with carefully considered beliefs, among them that it is a key agent of the coming Apocalypse.”

Woods writes persuasively about how Islamic State differs from al-Qa’ida, which many see as having essentially political aims. By contrast, Islamic State is devoutly religious and its core strategy is based on its understanding of Islamic teachings on the Apocalypse.

Wood argues that attempts to label Islamic State as “not Islamic” — a tactic frequently used by politicians ­attempting to express solidarity with mainstream Muslims — fundamentally miss the point. Islamic State is very Islamic.

Islamic State follows the Wahhabi sect of Islam. Wahhabism can be described as an ultra-ortho­dox sect that insists on a literal interpretation of the Koran and a literal implementation of its teachings. Wahhabism originated in Saudi Arabia in the 19th century and has been the dominant religious force there for two centuries.

Strict Wahhabis believe all those who don’t practise their form of Islam are infidels and enemies. Islamic State has taken this principle to its logical conclusion, persecuting not only non-Muslims but slaughtering thousands of Muslims who don’t share their fundamentalist beliefs.

Islamic State’s actions need to be evaluated with their Wahhabism in mind. Wood argues that rather than having worldly aims, Islamic State is committed to restoring civilisation to 7th-century Islamic ways as a precondition to bringing about the Apocalypse.

It is my understanding that Islam shares the concept of the Apocalypse with Judaism and Christianity. In Islam, the concept revolves around the final judgment in which Allah will punish sinners and bless the faithful. As strange as it sounds to us in Australia, Islamic State’s belief that the Apocalypse is imminent is key to its appeal and the success of its radicalisation messages.

Islamic State propaganda and radicalisation messages are based on Islamic teachings and cultural values, particularly those related to the afterlife and the Day of Judgment. These messages are very strong because Islam teaches that life on earth is temporary and all the actions of a Muslim should be directed towards achieving Jannah (heaven).

Islamic State propaganda draws heavily on the concept of the Apocalypse described in key verses of the Koran, in particular the 75th Sura of the Koran, al-Qiyamah. There are 12 major signs of the Apocalypse in Sura al-Qiyamah. At the time of judgment, terrible corruption will rule. One of the signs of the last day is the arrival of Masih ad-Dajjal (Anti-Christ). The Mahdi (spiritual and temporal leader) will be sent and, with the help of Isa (Jesus), will battle Masih ad-Dajjal. The Dajjal will cause confusion by making people think he represents good when he is ­actually evil.

Sura al-Qiyamah also talks about resurrection of the dead, a final tribulation and eternal division of the righteous and wicked. The righteous are rewarded with the pleasures of Jannah (heaven), while the unrighteous are tortured in Jahannam (hell).

Islamic State propaganda seeks to convince the Muslim diaspora the Apocalypse is near and they should return to the caliphate lest they be judged unrighteous on the Day of Judgment. The concept of a last caliphate is so strong among Muslims that the mere existence of a caliphate draws attention and an audience for Islamic State’s messages.

The propaganda is laden with religious symbolism and hidden meanings, drawing on teachings from the Koran and cultural traditions dating back a thousand years. Every word and act is carefully chosen to convince those reared in the Muslim tradition that the caliphate is true and the Apocalypse is coming. What seems medieval, or even pointless to nonbelievers, is designed to demonstrate to Muslims that Islamic State is legitimate and believers should return before the Day of Judgment.

Understanding the nature of Islamic State’s appeal is critical to designing and implementing policies to combat radicalisation. It is not clear whether those involved in these programs have sufficient understanding. Policies must address religious/cultural drivers.

The government has funded Countering Violent Extremism programs since at least 2010. The most recent budget allocated an extra $1.2 billion in funding for national security, of which $450 million will be used to strengthen intelligence capabilities, support the new metadata retention legislation and counter extremist messaging. Of this, $21.7m is com­mitted to combating terrorist propaganda, with a particular focus on the internet and social media. Have these policies been given the best chance of success?

Policies are likelier to be effective if they are informed by a deep understanding of what drives radicalisation on the ground in our communities on a day-by-day basis. This is best achieved by involving and perhaps employing trusted members of the Muslim community in policy design, intelligence and national security. There is a danger that policy designed in ignorance of the true drivers of radicalisation in the community will be ineffective or, worse, act to exacerbate the issue.

Anooshe Mushtaq is a Canberra-based adviser on Islamic radicalisation.

2 thoughts on “Islam, nothing but Islam, drives the global jihad”