“Erdoğan is openly pursuing the Islamization of Europe”

Of course he is. He never made a secret of it. This is now the time for the expulsion of all Turks, but we all know that the EUro-dhimmies don’t have the guts to do what needs to be done. 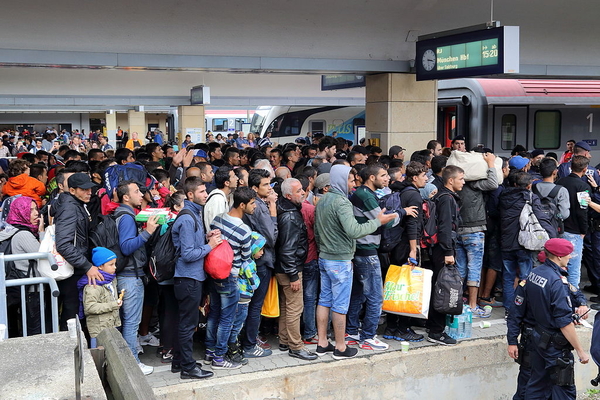 Thousands of newly arrived migrants, the vast majority of whom are men, crowd the platforms at Vienna West Railway Station on August 15, 2015 — a common scene in the summer and fall of 2015. (Image source: Bwag/Wikimedia Commons)

Turkey has threatened to back out of an agreement to stem the flow of migrants to the European Union if Turkish nationals are not granted visa-free travel to the bloc by October.

Although Turkish officials have repeatedly threatened to renege on the March 18 EU-Turkey deal, this is the first time they have set a deadline.

If the EU approves the visa waiver, tens of millions of Turks will gain immediate and unimpeded access to 26 European countries. If the EU rejects the visa waiver, and Turkey retaliates by reopening the migration floodgates, potentially millions of migrants from Africa, Asia and the Middle East could begin flowing into Greece this fall. Europe is trapped in a no-win situation.

The migration deal, which entered into force on June 1, was hastily negotiated by European leaders desperate to gain control over a crisis in which more than one million migrants poured into Europe in 2015.