Hungary is taking a tough stance against the migrant crisis

Some 3,000 officers will patrol the barbed-wire fence erected last year between alongside Croatia and Serbia.

The move comes after Hungary’s Prime Minister, Viktor Orban, vowed for a major terror clampdown by saying there is a “demonstrable” link between immigration and terrorism.

Mr Orban has called for a referendum over whether or not Hungary should accept a mandatory quota of migrants imposed by Brussels bureaucrats.

The vote is in response to the EU’s plans to relocate 160,000 migrants around the bloc by using mandatory quotes.

Hungary is planning a new and even “more massive” fence to prevent refugees from crossing its border on their way to western Europe.

The Prime Minister, Viktor Orban, said the construction would stop any surge in asylum seekers if the EU-Turkey deal reducing boat crossings over the Aegean Sea collapses.

“Technical planning is under way to erect a more massive defence system next to the existing line of defence, which was built quickly [last year],” he said.

The existing razor-wire construction runs the entire length of Hungary’s borders with Serbia and Croatia, where hundreds of thousands of migrants have crossed during the refugee crisis.

The fence has been credited with sharply reducing flows, although footage has shown refugees attempting to climb or crawl under it.

It is one of several controversial policies brought in by Mr Orban, who previously called migrants a “poison” and is known for his anti-immigration views.

He said there could soon be a “greater need for security” at the borders if Turkey defualts on its agreement to keep refugees in the country and accept failed asylum seekers from Greece.

How Hungary welcomes its refugees – in pictures

Turkish ministers have threatened to withdraw from the deal, which has caused a sharp drop in boats crossing the Aegean Sea since March, amid anger delays in an EU visa waiver programme and the response to a failed coup to oust Recep Tayyip Erdogan.

Mr Orban said it was in Europe’s interest to work with Turkey on security and other issues.

“Immigration and migrants damage Europe’s security, [they] are a threat to people and bring terrorism upon us,” he said, arguing that this was caused by allowing the uncontrolled entry of large numbers of people “from areas where Europe and the Western world are seen as the enemy”.

They have been widely condemned by human rights groups following protests by thousands of stranded migrants last year, who were beat back by police officers armed with truncheons, tear gas and water cannons. 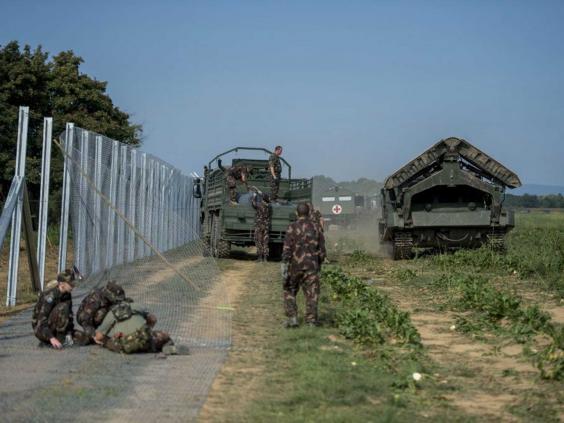 It recently emerged security forces have begun making scarecrows along the fences in crude attempts to deter refugees, while one Hungarian MEP suggested pig heads should be hung there last week.

Hungary has also introduced controversial legislation that allows officials to return migrants to Serbia if they are caught within five miles of the border.

But officials have denied repeated allegations that officers have used force to “escort” the migrants and refugees back to Serbia.

Of 177,135 asylum applicants to Hungary in 2015, just 146 were approved, according to government statistics.

The government has called a referendum on 2 October seeking political support for the rejection of any EU plans to introduce refugee quotas among its member countries.

Meanwhile, Norway has started building its own fence along its border with Russia to keep out refugees using the route into Scandinavia. Forces will patrol the barbed wire

Karoly Kontrat, the minister of state of the ministry of interior, did not hold back on his criticism as he insisted there are hundreds of terrorists in Europe as a result of migration.So far this year Hungary says it has registered 19,140 asylum applications and more than 14,000 migrants have crossed its southern borders illegally.The referendum, which will take place on October 2, has opened up a huge rift between Mr Orban and the beleaguered European Union as the migrant crisis spirals out of control.

Residents will be asked: “Do you want the European Union to be entitled to prescribe the mandatory settlement of non-Hungarian citizens in Hungary without the consent of parliament?” More here…