2 commies and one devout soldier of allah demand we commit collective suicide:

And this proves Einstein’s definition of Insanity.

Insanity – To continue repeating an action that does not work in hope of getting a different result this time.

NEW YORK CITY, New York — Despite the fact that terrorism has torn New York City, London and especially Paris apart, all three cities’ mayors argued for bringing in more unscreened “refugees” in a joint oped in the New York Times as the United Nations General Assembly meets here this week.

New York’s Bill De Blasio, London’s Sadiq Khan and Paris’s Anne Hidalgo wrote the joint oped pushing for western cities to take in more refugees, and it was published just days after terror incidents both here and in Minnesota.

“World leaders are gathering in New York this week for the United Nations General Assembly, and at the top of their agenda sits a refugee crisis that has reached a level of urgency not seen since World War II,” De Blasio, Khan and Hidalgo wrote. “The United Nations Summit for Refugees and Migrants and President Obama’s Leaders’ Summit on Refugees represent a watershed moment that is putting a global spotlight on the need for an effective response to a growing humanitarian crisis.” 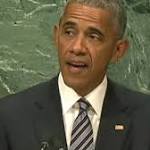 Obama at UN warns Americans against walls and nationalism

United Nations (CNN) President Barack Obama took to the most prominent international stage Tuesday to deliver a stark warning to American voters of the dire global consequences they face should they embrace isolationism and ultra-nationalism in …
America in Denial that it is at War with Islam!
Steven Shamrak

Bombs are exploding in NY and NJ. A stabbing in a Minnesota mall and no one can connect the dots…honestly! It saddens me that my fellow Americans will have to learn the hard way that they are at war with the same enemies Jews in Israel have been fighting. My condolences! The government and so-called free press do not WANT us to connect the dots: if you can’t name your enemies, you cannot effectively fight a war they wage against you.

Many Americans refuse to connect the dots. They think of it all as a “conspiracy theory”, and some have already blamed Jews – that is just for starters. Their heads are in the sand – all the way. Some of them are saying “C’est la Vie” – I call it “Surrender”! When will they ever learn…?

The cover-up and lies by the media anger and sicken me. The blissful ignorance of Western populations that are in danger of losing their lives and freedoms shocks me to the core. The dysfunctional Muslim world, that our children and grandchildren will face, terrifies me. If it takes them that long to conquer… with fools, like the brainless, narcissistic, incompetent Canadian Prime Minister and his merry band of thieves in charge, the transition may be just around the corner. Muslims are laughing at our blindness and self-destructive stupidity.

And our leaders and press dare to call it “not a terror action”! It doesn’t matter who did it… Muslims, lefties or KKK – it’s terror and nothing but terror, and Americans fear to face and react to hard reality, because of their idiotic political debate.

When I am told every generation had its war or changes, I do not accept it. This is the worst! People should have learnt, and known better to allow this to happen. Wow, in the United States of America? Under attack and nothing is being done about it – Who would have ever thought!

2 thoughts on “London, Paris and NYC mayors call for the murder of more of their citizens”