Local reports suggest that at least 59 of the monks have now been freed with police storming the building. The attacker is believed to still be at large.

“For the moment there is no particular evidence about the motive for this crime.”–Montpellier prosecutor Christophe Barret

A source close to the investigation told Reuters: “Nothing at this stage would indicate that this would be a terrorist act.”

Its never Islamic terrorism until it is: wanna bet that his name is Mohamed or Abdullah?

A gunman is on the run in France after killing a woman in an attack on a retirement home for Catholic missionaries near the city of Montpellier.

“An individual, who was masked and armed with a knife and a sawn-off shotgun came into the retirement home where 70 missionaries live,” a source told the AFP news agency, adding that the man’s motivations were unknown. 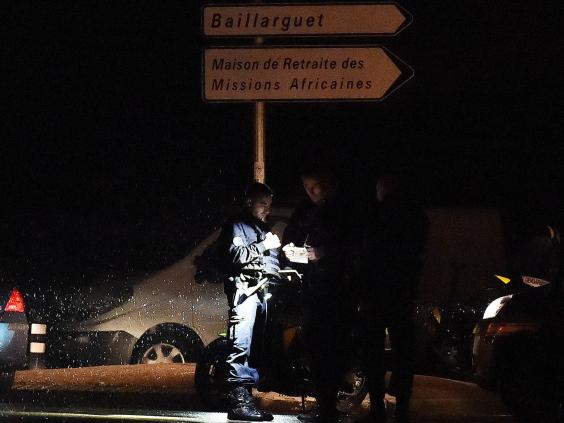 Police at a retirement home for Catholic missionaries in Montferrier-sur-Lez in France, following an attack on 24 November (EPA)

Local authorities confirmed at least one person had been found dead, with the e-Metropolitain news website reporting a female supervisor had been killed with a knife after she raised the alarm.

The woman’s body was reportedly found bound and gagged, while the attacker’s whereabouts remained unclear as searches continued.

“For the time being, there is only one victim,” Montpellier prosecutor Christophe Barret said. “For the moment there is no particular evidence about the motive for this crime.”

The assault was launched at around 9.45pm local time (8.45pm GMT), at the home run for both religious and non-religious residents.

Around 60 residents have since been rescued by police but the assailant was believed to have fled. Road blocks were set up in the surrounding

“A large number of security forces, firefighters and ambulance personnel are at the scene,” said the mayor of Montferrier-sur-Luz, Michel Fraysse.

Alain Berthet, a local councillor in Montferrier-sur-Luz, said the home’s residents were “very elderly with an average age of 75 although some are more than 90,” with many needing assistance to walk.

News of the killing was reverberating round France late on Thursday night, with people voicing their horror on social media.

The secretary general of the French Bishops’ Conference, Olivier Ribadeau Dumas, wrote on Twitter: “Our prayers tonight go to the woman who lost her life in this attack on a retirement home.”

Suspicions quickly turned to terrorism just months after Isis supporters murdered a Catholic priest in an assault on a church in Normandy.

There was no immediate claim of responsibility for Thursday’s incident.

France remains under a state of emergency imposed following the murder of 130 people in the Paris attacks last November.

Several terror plots have since been uncovered, including plans by Isis militants to attack Disneyland Paris and the Champs Elysees.

One thought on “Montpellier attack: Armed man on run after killing woman at retirement home for Catholic missionairies”