That this column even needed to be written is evidence of the truth of what I have long contended, that “Islamophobia” is a propaganda term designed to intimidate people into thinking it wrong to oppose jihad terror. Justin Trudeau uses it in exactly that way in response to Andrew Scheer’s question: Scheer asked him about the security risks involved in Trudeau’s plan to “reintegrate” returning Islamic State fighters into Canadian society, and in response, Trudeau charged him with “Islamophobia.” Scheer wasn’t talking about “moderates,” he was talking about Islamic State jihadis. But even that was “Islamophobia” for Trudeau.

Find out just how destructive the phenomenon of “Islamophobia” is in my new book Confessions of an Islamophobe. Order your copy here now. 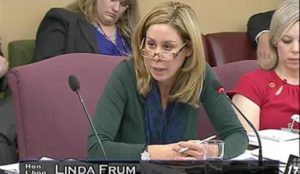 Canadian Senator Linda Frum to Trudeau: “There is nothing bigoted or Islamophobic about arresting ISIS fighters”

According to Canadian intelligence agencies, at least 250 Canadian citizens have traveled to Syria and Iraq to fight for the terrorist organization ISIS and at least 60 of those have returned to Canada.

The terrorist threat to Canada posed by these extremists is obvious. However, even if they do not commit new acts of violence in our country it remains the case that these individuals broke the law by travelling to another country for the purposes of committing an act of terror.

The Combating Terrorism Act, which became law in 2013, makes it a criminal offence to leave or attempt to leave Canada in order to commit acts of terrorism. Given the high number of Canadians who are travelling abroad to participate in ISIS atrocities, one would expect that the Canadian government take these matters seriously and charge ISIS fighters upon their return to Canada.

Precisely the opposite is happening. Not only have very few of these terrorists been arrested, the Government of Canada is focusing resources on re-integrating them into Canadian society. Recently, Prime Minister Justin Trudeau proudly announced that resources have been put in place to facilitate disengagement from violent ideologies.

Last week, in response to questions from the Leader of the Official Opposition, Andrew Scheer, about this critical issue of national security, the prime minister accused Conservatives of being discriminatory and Islamophobic. Hiding behind the rhetoric of “diversity and multiculturalism” to avoid answering legitimate questions about Canada’s national security is not good enough.

No one of goodwill believes there is any place in a diverse and multicultural Canada for ISIS terrorists. There is nothing bigoted or Islamophobic about arresting ISIS fighters….

A message from Vlad Tepes:

Dear readers. There is a stunning amount of interesting, important and relevant links to news items in the Reader’s Links post for today as well as the last couple of days. Please do take a look. One example, but just one, is how the former 2IC of France, Manuel Valls, actually admits that Islamic terror is absolutely about Islam and we have to admit it or perish to it. He is still on about moderate muslims etc. But its still a pretty far cry from Sweden now wanting to block public access from any database that actually shows where violent criminals are from.

3 thoughts on “No, Monsieur Trudeau: Jihadists are not “returning Islamic travelers””