Who is doing the discriminating? Bosnia-Herzegovina is 51% Muslim, and 15% Catholic. And Islamic law contains no societal model whereby Muslims and non-Muslims live together with equal rights. But Archbishop Puljić dares not spell out what is happening, lest he run afoul of his relentlessly Islamopandering boss in Rome.

Archbishop: Up to 10,000 Catholics leaving Bosnia-Herzegovina each year because of discrimination

“Up to 10,000 Catholics are leaving Bosnia-Herzegovina every year because of discrimination, Archbishop reveals,” European Post, January 5, 2018

The antisemitic sentiment already prevalent among French Jews will intensify in the wake of Donald Trump’s recognition of Jerusalem as the capital of Israel last month.

Note how the decision of President Trump is the focus of the first paragraph, rather than “radical Islamists stuck a knife in my chest”; “every day we are attacked”; “I’m scared of going outside and showing my face. I’m forced to wear a cap every day to hide my kippah”; and according to the French Prime Minister Édouard Philippe, “in our country, antisemitism is alive…it hides always behind new masks, attempts to justify itself through diverse reasons. This ideology of hate is here, it’s present and it’s making some French Jews to make ‘aliyah.’”

Jihadists and Islamic supremacists represent a systemic and organized face of anti-Semitism today as they seek to delegitimize and ultimately obliterate the Jewish state of Israel. With this in mind, a declaration of Jerusalem as the capital of Israel is just the latest pretext for their hatred and violence.

Donald Trump is not to blame for their actions. Instead, appeasers are to be blamed. Jihadists have stated and continue to state openly and precisely what their objectives and goals are. Appeasers choose not to believe them, despite overwhelming evidence everywhere. Jihadists have grown accustomed to appeasement, which has emboldened them, and they are now enraged because Trump decided to stand up to them rather than continuing the universal appeasement. Now they are making life unbearable for Jews in France and increasingly in Germany, while leaders tolerate the abuse. 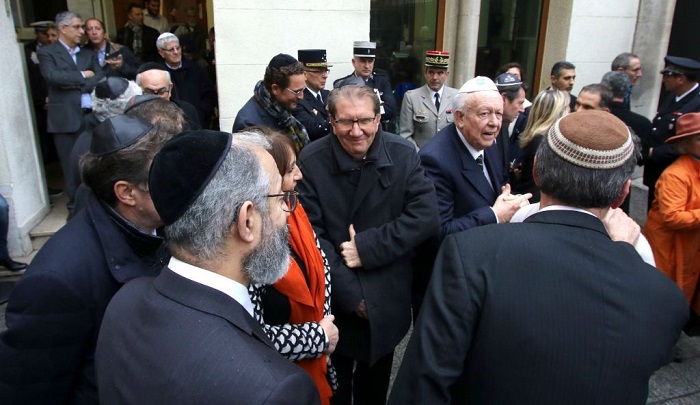 The antisemitic sentiment already prevalent among French Jews will intensify in the wake of Donald Trump’s recognition of Jerusalem as the capital of Israel last month, locals believe.

Attacks against the Jewish community surged dramatically in 2015, when authorities officially registered 808 antisemitic attacks. The actual number of cases, however, can be much higher, as not all the victims filed official complaints. And while attacks against Jews decreased in 2016, according to assessments by Jewish Community Protection Service in France (SPCJ), 335 assaults were registered by French Jews that year. The drop is partly due to enhanced security measures introduced after the November 2015 Paris attacks which killed 130 people and led to the introduction of a two-year state of emergency.

“One out of four racist acts committed in France in 2016 targeted a Jewish person, while Jews represent less than 1 percent of the population,” the SPCJ said in their annual ‘Report on Antisemitism in France’ released in October.

Antisemitic acts committed in France are a “home-grown phenomena,” the SPCJ said, saying, that the “number of Jews who leave the country, or think about leaving France for another country, keeps on increasing.”

The wave of antisemitic attacks began on January 9, 2015, after 29 people were taken hostage in a kosher supermarket. By the end of the terrorist’s siege, four people were executed. The violence sparked a mass exodus of Jews from France. In 2015, almost 8,000 left and another 5,000 fled in 2016. Overall, in the last decade, more than 40,000 have packed their bags. That’s almost ten percent of the around 465,000 Jews that continue to reside in France.

Apart from the obvious security concerns, French Jews feel they are “misunderstood” within the French society. Others fear the loss of their identity.

“In a few decades, there will be no Jews in France. And there is also a problem in Europe,” Abitbol told RT. “There are almost no Jews now, they are leaving. So, it’s terrible what I will say, but Europe is continuing in peace what Hitler had done by war.”

“Radical Islamists stuck a knife in my chest. I’m very scared for my family and myself,” said another.”Every day we are attacked. They enjoy it,” a female member of the Jewish community lamented.

“I’m scared of going outside and showing my face. I’m forced to wear a cap every day to hide my kippah [brimless cap],” another Jewish person told RT.

Last month, France’s PM acknowledged the scale of the problem. “In our country, antisemitism is alive. It is not new, it is ancient. It is not superficial, it is well-rooted and it is alive,” Edouard Philippe noted in December.

“It hides always behind new masks, attempts to justify itself through diverse reasons. This ideology of hate is here, it’s present and it’s making some French Jews to make ‘aliyah,’ [immigration of Jews to Israel]” Philippe said. “It should be a spiritual choice but it pains all citizens of the republic when it’s a form of self-exile, made out of insecurity and fear.”

Philippe’s statement came a few days after Donald Trump made the explosive decision to recognize Jerusalem as the capital of Israel…..

No Muslim is an “asylum seeker”- all Muslims are soldiers of allah. Not one should be accepted in the West. Their mission is Islamisation, by  jihad,  preferably by demographics.

The number of asylum applicants in France increased by 17 percent last year compared to a 16-percent rise in 2016, the French refugee agency chief said on Monday.

Pascal Brice, the director general of the French Office for the Protection of Refugees and Stateless Persons (Ofpra), told French broadcaster CNEWS that such a high number of asylum requests was a first in at least 40 years, having reached a record high of 100,412 requests.

Just over a third of these, nearly 43,000 people, saw their requests accepted in 2017 and have been granted refugee status.

Brice particularly emphasized the sharp rise in the number of requests from Albanian and West African nationals.–World Bulletin / News Desk