‘ISIS-inspired’ female Bangladeshi student, 24, wearing a burqa ‘stabs’ a 56-year-old man in his sleep while his daughter, 5, watched on and is charged with terrorism just days after arriving in Australia Shoma has been remanded in custody and did not apply for bail when she faced Melbourne Magistrates’ Court on Saturday. Pictured: Court sketch of Shoma
.

Another neighbour said the man called them for help, where they found him lying in the garage in a pool of blood.

‘I saw all the blood, it was shocking, I saw so much blood,’ they said.

The woman was arrested at the scene and taken to hospital with a hand injury.

‘She’s only been in Australia for a week, they took her in because they felt sorry for her,’ another neighbour said.

Australia: Muslima on student visa stabs sleeping man in neck in house where she was renting a room

“A Bangladeshi woman who recently moved to Australia and held a student visa has been charged after an alleged ‘Islamic State-inspired’ stabbing on a sleeping man who was with his young daughter.”

But remember: to have refused her a room would have been “Islamophobic.”

No. An “isolated incident” is the last thing it is. This is just one small attack in a global jihad that you and your superiors, Acting Commissioner Guenther, do not admit exists, to your own great detriment. 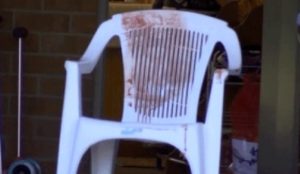 A Bangladeshi woman who recently moved to Australia and held a student visa has been charged after an alleged “Islamic State-inspired” stabbing on a sleeping man who was with his young daughter.

A 56-year-old man was stabbed in the neck while sleeping at his home in Mill Park, north-east of Melbourne’s CBD, about 4.25pm yesterday, police said.

He was taken to the Royal Melbourne Hospital and will undergo surgery today for non-life-threatening injuries.

Momena Shoma, who was renting a room at the home, was arrested at the scene and taken to hospital.

The 24-year-old did not apply for bail when she faced Melbourne Magistrates Court for a brief hearing today.

Shoma, who faced court in a blue jumper with her black hair tied back, suffered an injury to her left hand and will see a nurse in custody, the magistrate heard.

It’s alleged Shoma travelled to Melbourne on a student visa on February 1 and was renting a room at the victim’s Callistemon Rise home while studying.

She was enrolled in a course at La Trobe University, police said.

The state’s Joint Counter Terrorism Team has charged her with engaging in a terrorist act, under the Commonwealth Crimes Act Section 101.1.

Investigators searched the Mill Park home and another property in Bundoora, where she had previously stayed.

Police were not looking for anyone else, Acting Deputy Commissioner Ross Guenther said.

“This is an isolated incident and the community can be assured that Victoria Police is doing everything we can to keep the community safe,” he said.

“The community can expect to see an increased police presence at a number of events today and at major events in the coming weeks.

“We will allege this was a stand-alone, Islamic State inspired attack, designed to cause harm to our community,” he said….

Deputy Commissioner McCartney said there are no subsequent terrorism threats to the community.

The one bright spot in all this is that she is not a citizen. She is here on a ‘student visa’.

That visa must now be cancelled, never to be renewed. La Trobe University should be told, point blank, to EXPEL her, dishonorably. (What course was she studying? How many other Bengali Muslims are studying it? WHO was paying for her course?)

She should be subjected to the maximum applicable penalty for Attempted Murder; then, once she has served her sentence out, she should get a one-way ticket back to Bangladesh.

And… NO MORE identifiably-Muslim ‘students’ – or immigrants – or tourists – or anything-else, from Bangladesh or any other OIC-member countries. Ever. From now on.

State that this is about keeping out persons adhering to a dangerous and hostile *ideology*. State that we are quite happy to accept bona fide Coptic Christians from Egypt.. but ONLY bona fide Coptic Christians; Assyrian Christians, Yazidis and Mandaeans, from Iraq and Syria … but ONLY those who could be identified as such, after stringent cross-checking; and ONLY bona fide Christians, Buddhists or Hindus from Bangladesh or Pakistan, again, after stringent cross-checking with the relevant NON-ISLAMIC communities and with bodies such as Barnabas Fund who know who is who and who is NOT. But.. NO MUSLIMS!!!! Same deal with people from Indonesia or Malaysia: ONLY those who are manifestly from the non-Islamic minority groups – Malaysian Indian Christians and HIndus, Malaysian-Chinese Christians or Buddhists or Confucians, Indonesian-Chinese Christians or Buddhists. No. Muslims. And if a Muslim DOES pretend to be a Christian, or a Hindu, or a Sikh, to sneak in, the rule must be that the moment the imposture is detected, no ifs ands or buts, no appeals permitted, BANG! out they go, back to their point of origin.

The perpetrator of this “isolated incident” traveled to Australia with the predetermined purpose of “killing an infidel.” This is not my own jaundiced, “islamophobic” speculation. It has even been reported on the ‘nooze’. Ah well! hope springs eternal. Maybe, just maybe , the cracks are beginning to show in the “nothing to do with Islam; suffering from mental health issues; fears of an “islamophobic” backlash against innocent muslims” official narrative. But I won’t be popping the champagne corks just yet!

One thought on “Banglatrashi Muslima Stabs Sleeping Landlord in Neck”