The black widows of Islamic State are creeping out of the caliphate and into the West. Having lost the battle to enslave women and girls for the cali­phate, the brides of genocide are demanding the right of return to the countries declared enemies of Allah. …

Really? But of course. Only at PuffHo. 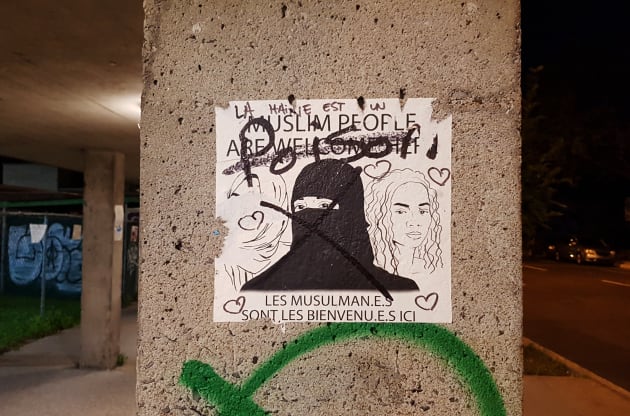 An international organization of Muslim scholars headquartered in Qatar has called for a “public and official uprising” against a recent decision by the United States to move its embassy to occupied Jerusalem al-Quds in May.

“We call for a Palestinian, Arab and Islamic uprising against this American aggression,” Secretary General of the International Union of Muslim Scholars (IUMS), Ali al-Qaradaghi, said in a statement on Sunday.

He added, “Jerusalem al-Quds is the cause of [our Muslim] nation and abandoning it or changing its identity will be a disgrace.”

Islamic State has been destroyed. The war is over. The free world is secure. Order is restored. The worst genocidal jihadis are dead. The rest are contained. Your ­family is safe to commemorate Anzac Day, celebrate Easter and walk through the CBD without fearing the infernal shriek “Allahu Akbar”. There’s only one problem: here comes the bride, all dressed in black.

The black widows of Islamic State are creeping out of the caliphate and into the West. Having lost the battle to enslave women and girls for the cali­phate, the brides of genocide are demanding the right of return to the countries declared enemies of Allah. They’re piling on feminine wiles to escape their well-­deserved fate six feet under the crumbling caliphate. Prepare yourself for a season of female jihad filled with crocodile tears, protests of innocence and a stock-standard victim script worthy of an Oscar.

Predictably, the much of the media is greeting the women of Islamic State with open arms. Those with children are enjoying especially soft treatment. In an interview with Die Welt, Human Rights Watch program director Nadim Houry sympathised with their “difficult situation” before calling on European governments to allow children to return. But we all know what will follow — the demand for family reunion.

Just like pedophiles, female ­jihadis are never guilty. They’re misunderstood. Tell that to the hundreds of women and children the jihadi sorority enslaved, tortured and killed for the caliphate. Tell it to Ramzia, the Yazidi ­mother sold in an Islamic slave market. The militants came one day and took her family. They sold her teenage daughter as a sex slave. As Ramzia told PBS, her child managed to escape but only after enduring a year of torturous rapes. Other family members were captured and nine children were taken. The boys were sent to militant training camps. The little girls were sold into sexual slavery.

As a domestic slave, Ramzia turned to the woman of the house for support. She entrusted the Saudi woman with her deepest wish that one day she would ­return home. The ISIS bride ­replied: “You will never go home. You will die in my house.”

Islamic State unleashed a ­regime of misogyny unrivalled in the modern world. Three years ago, I wrote about the unfolding horror on this page. At the time, jihadis had opened a slave market selling girls with price tags ­attached. About 3500 Yazidi women and children already had been sold into sexual slavery.

Islamic State misogyny wasn’t individual. It was foundational to the caliphate. It came with an ­instruction manual: Questions and Answers on Taking Captives and Slaves. As translated by the Middle East Media Research Institute, the Islamists viewed non-Muslim women as “unbelieving” and therefore legal chattel. Online, jihadis laughed at the agony of the women sold into sex slavery, saying: “In Mosul they are closed in a room and cry, and one of them committed suicide LOL.”

From the outset, female ­recruits were critical to the establishment of Islamic State and led the brutal regime’s war on women. For people inclined to sympathise with jihadis if they are female, consider female jihadis’ capacity for sympathy. There is Nada al-Qahtani, the jihadi ­assigned to lead a battalion. She earned her promotion as chief of the all-female morality police, the al-Khansaa Brigade.

The black sack brigade patrolled streets searching for women to maim and kill. By way of example, consider one victim shot dead for lifting her niqab to check the quality of fruit at a ­market stall. ISIS gals also used public flogging to humiliate women. In their spare time, the ­jihadis crafted a torture device called “the biter”. It resembled a bear trap. The brides of genocide used it on women deemed guilty of polluting public purity. Common victims were mothers caught breastfeeding their hungry babies. In case you think only a few ­female jihadis joined the morality police, think again. Many foreign women and girls who chose to join the jihad spent time working for such outfits before producing children for the caliphate.

The brutality of Islamic State’s violence against women was well publicised within a year of its ­establishment. Anyone who joined ISIS after 2014 would have known it traded in female agony. They are willing accomplices to the torture and sexual enslavement of women and children under the caliphate regime. Yet only months after Iraq declared victory over ISIS, we are expected to believe Islamic State’s jihadis are victims if they’re female.

Now that their genocidal dream has been bombed into ­oblivion, the rank battalion of jihad sisterhood is demanding right of return. There should be no right of return for the soldiers of genocide, male or female. They chose to be stateless when they pledged allegiance to the cali­phate. However, under Australian law, citizens and their children still have right of return.

Home Affairs Minister Peter Dutton indicated last week his ­intention to review terrorism laws, given that only one jihadi has been stripped of citizenship. It is estimated that about 110 Islamists from Australia survived the destruction of Islamic State.

Consistent with the jihadi strategy of dispersion, ISIS reprobates will try to re-enter the West to avoid punishment, regroup and wage war on new territories when the time is right. Some Western states are alert to the strategy. Franceinfo reported French Foreign Minister Jean-Yves Le Drian denying automatic right of return for French jihadis: “(They) will not be repatriated to France as they are fighters, so they are enemies … (they will be) judged by those who they fought.”

Don’t spare the sisters of the caliphate. Given the chance, they won’t spare you. Should pity threaten to cloud your better judgment, remember this name: Faten. The Daily Mail reported her death last year. The 10-year-old was helping her mother clean house when she stepped outside accidentally. The female morality police found out and deemed her impure. They tortured the ­little girl with the biter. She bled to death.

If you need a reason to stop the brides of genocide re-entering the West, make it Faten.