I’m really curious what kind of Jesus they are marketing here.

“Jihad of Jesus,” eh? It’s always the Christians who host these outreach events to Muslims. Never do we see a mosque holding a “Eucharist of Muhammad” or some such event.

Mohammed Ali Amla, founder of Christian Encounter, says: “We want this to be an event that people can come to and learn about communities working together.”

Great. So there will be an honest discussion of obstacles to working together, won’t there? And a forthright mutual exchange about how those obstacles can be surmounted? Somehow I doubt it. Generally these events simply ignore such unpleasantness, and prey on the ignorance of the general public to preclude unwelcome questions. It is extraordinarily unlikely that there will be any discussion of these Qur’an verses:

Jesus is not the Son of God and belief in the Trinity is wrong: “O People of the Book! Do not exaggerate in your religion or say anything about Allah except the truth. The Messiah, Jesus son of Mary, was only a messenger of Allah, and his word which He conveyed to Mary, and a spirit from him. So believe in Allah and his messengers, and do not say “Three” –- Cease! It is better for you. Allah is only one Allah. Far be it from his transcendent majesty that he should have a son. His is all that is in the heavens and all that is in the earth. And Allah is sufficient as defender.” — Qur’an 4:171

Jesus was not crucified: “And because of their saying: We killed the Messiah, Jesus son of Mary, Allah’s messenger, they did not kill him or crucify him, but it seemed to them as if they had. Those who disagree concerning it are in doubt about it. They have no knowledge of it except pursuit of a conjecture; they did not kill him for certain.” — Qur’an 4:157

Those who believe in the divinity of Christ are unbelievers: “They have certainly disbelieved who say that Allah is the Messiah, the son of Mary.” — Qur’an 5:17

Christians have forgotten part of the divine revelations they received: “From those, too, who call themselves Christians, we took a covenant, but they forgot a good part of the message that was sent them: so we estranged them, with enmity and hatred between one another, until the day of judgment. And soon will Allah show them what they have done.” — Qur’an 5:14

Those who believe that Jesus is God’s Son are accursed: “The Jews call Ezra a son of Allah, and the Christians call the Messiah the son of Allah. That is a saying from their mouth; they simply imitate what the unbelievers of old used to say. Allah’s curse be on them: how they are deluded away from the Truth!” — Qur’an 9:30

Christians who do not accepted Muhammad and the Qur’an are the most vile of created beings: “Nor did those who were given the Scripture become divided until after there had come to them clear evidence. And they were not commanded anything except to worship Allah, be sincere to him in religion, inclining to truth, and to establish prayer and to give zakah. And that is the correct religion. Indeed, they who disbelieved among the People of the Book and the polytheists will be in the fire of Hell, abiding eternally therein. Those are the most vile of created beings.” — Qur’an 98:6

Muslims must fight against and subjugate Christians: “Fight those who do not believe in Allah or the last day, and do not forbid what has been forbidden by Allah and his messenger, and do not acknowledge the religion of truth, even if they are of the People of the Book, until they pay the jizya with willing submission, and feel themselves subdued.” — Qur’an 9:29 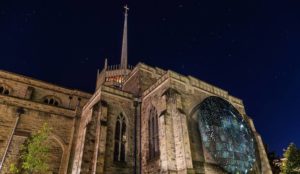 A CATHEDRAL has announced that it will hold an event in the wake of a controversial documentary.

A seminar discussing the challenges presented by integrating the Christian and Muslim faiths in Lancashire will take place at Blackburn Cathedral on March 7.

Speaking of the documentary at the time, senior Anglican clergy said that the BBC Panorama programme ‘White Fright’ did not paint an accurate picture of Blackburn.

Saying it ‘failed to tell the whole story’ the cathedral will now play host to a seminar that will question the links between Muslim and Christian faiths.

Mohammed Ali Amla, founder of Christian Encounter and someone involved in breaking down segregation barriers has spoken about what the seminar, named ‘The Jihad of Jesus’ wishes to achieve.

He said: “We want this to be an event that people can come to and learn about communities working together.

“We have worked hard to create a panel of people who can discuss their thoughts and own experiences with the audience, stimulating frank discussion and rich, important conversation.”

A key member of the panel, Dave Andrews, is author of the book ‘The Jihad of Jesus: The Sacred non-violent Struggle For Justice.’

“The people who will be joining us to discuss relations between Muslims and Christians on the night all recognise the challenges and differences that we face” said Mr Ali.

The Bishop of Burnley, Philip North and Imam Saleen Seedat will also be there on the night….

One thought on “UK: Blackburn Cathedral to hold “Jihad of Jesus” seminar”