The suspect reportedly told police he had been in a “bad, aggressive mood”.

“One eyewitness said the attack happened in front of a Japanese restaurant near the U1 Nestroyplatz station on the Praterstrasse. He claimed the male victim injured in the first attack suffered from a heart attack and that the attacker shouted ‘Allah, Allah.’”

It is noteworthy that this was not included in initial reports of the attack. The international media continues to try to mislead people about the nature and magnitude of the jihad threat by leaving out salient details such as this one. (More below the fold) 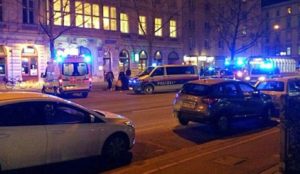 “Four people including a 17-year-old girl are critically injured as ‘deranged knifeman shouting Allah’ goes on rampage in Vienna before ‘man of Afghan descent’ is arrested,” by Charlie Bayliss, Mailonline, March 7, 2018 (thanks to the Geller Report):

An Afghan man has been arrested after four people were injured in two knife attacks in Vienna, Austria.

This article from Le Parisien doesn’t mention Islam or Muslims, but we all know who the “migrant men” are who are striking terror in the hearts of disbelievers. French politicians are waging jihad against their own citizens, by aiding and abetting the Mohammedan invasion. Six people were stabbed in a single attack in northern Paris this week as reports claim that the number of random attacks across the country number as many as 777 per day.

The stabbing attack took place in the heavily-migrant populated 18th arrondissement of the French capital and saw a drunken man attack people around him at random, causing panic, Le Parisien reports.

The attacks started at around 11:20 pm on Tuesday. Police arrested the drunken man hours later at 1:15 am thanks to CCTV cameras in the area. The man was found hidden in the doorway of a building with his clothes soaked in blood.

Of the six people stabbed, five of the victims were rushed to a nearby local hospital while the sixth victim was able to escape injury due to the thick clothing he was wearing.

The neighbourhood where the stabbings occurred became infamous for migrant violence in  2016 when the nearby Stalingrad metro station, the former site of a large makeshift migrant camp, erupted into riots described as being like a “war zone”.

Women who live in the area have also complained of constant harassment by migrant men with some saying that refuse to walk alone in the area at night.

Random acts of violence, known in France as violences gratuites, are on the rise nationwide with some estimating there to be 777 violent acts not motivated by other factors, like robbery, per day.

Christophe Soullez, the director of the National Observatory of Delinquency and Criminal Responses (ONDRP), claimed that young people in France are now “less tolerant of remarks and show some impatience. They accept less authority. They are more impulsive, and they act out quicker.”

Those kinds of attitudes were present over the New Year’s celebrations in the “Sensitive Urban Area” of Champigny-sur-Marne when a policewoman was brutally attacked by a gang of young men. The incident, which was filmed, saw the youth’s knock the officer to the ground and kick her in the head.

Three pedestrians were attacked at random by a man wielding a knife near the capital’s famous Prater Park at around 7.45pm local time.

Police say that the three victims hurt in the stabbing frenzy were a family, including a father, mother and their daughter, 17.

Then 30 minutes later, another person was seriously injured in a separate attack at Praterstern. A police spokesman confirmed all the victims were Austrian.

One eyewitness said the attack happened in front of a Japanese restaurant near the U1 Nestroyplatz station on the Praterstrasse. He claimed the male victim injured in the first attack suffered from a heart attack and that the attacker shouted ‘Allah, Allah’. This has not been confirmed by police.

A police spokesman said: ‘A man attacked a family – a father, a mother and their 17-year-old daughter – with a knife. The three people were seriously injured and their lives are in danger.

‘And half an hour later, there was another attack … at Praterstern and here a person was also seriously injured and their life is in danger. We do not know to what extent there is a connection here and any motive remains unclear.’

A male citizen of Afghanistan was later arrested in connection with the second assault, but no further details were immediately available and any connection between the stabbings remained unclear, the spokesman said shortly afterward….