Islamic indoctrination starts early.
We urge all friends to pay close attention to what is going on in the kindergartens, schools and universities their children visit.

If you spot underhanded Islamisation in our education system, let us know. Call the principal’s office and the office of your education minister.

‘They indoctrinate them young’: Refugee family’s fury as western Sydney high school forces their children to write essays and make videos about how Muslims are ‘excluded’ by white Australians

A refugee family is outraged at a high school for making Year 12 students write essays and make videos on Muslim ‘exclusion’.

Leumeah High School in Sydney’s south-west is asking Society and Culture students to deliver a five-minute oral presentation on the ‘social exclusion faced by people of Muslim faith in Australia’.

The Year 12 Higher School Certificate students are also required to explain ‘the barriers’ Muslims face in ‘accessing socially-valued resources’ in a YouTube video. Peter Dutton says “like-minded” countries should come together to review the relevance of the 1951 United Nations refugee convention, arguing the document is outdated and does not account for the modern movement of people

In interview with Guardian Australia, the immigration minister questions if the convention remains relevant

• Peter Dutton: ‘Some leaders fall into the trap of abandoning principles’

A Rohingya refugee at Kutupalong refugee camp in Bangladesh’s Ukhia district on 5 April, 2018.

The home affairs minister, Peter Dutton, says “like-minded” countries should come together to review the relevance of the 1951 United Nations refugee convention, arguing the document is outdated and does not account for the modern movement of people.

In a wide-ranging interview with Guardian Australia conducted on Tuesday, Dutton flagged a reluctance to allow the elderly family members of immigrants to come to Australia, and a desire to incentivise new arrivals to move to regional communities. He also reaffirmed the country’s commitment to a non-discriminatory immigration policy.

Dutton said he agreed with statements made by the British prime minister, Theresa May, and others suggesting the UN convention relating to the status of refugees could be modernised “or at least an update of the way in which the convention works and what it provides for”.

Australia’s immigration policy is meant to be blind to race, but is it?

Why should it be?

He said countries’ efforts to resettle refugees were “token” given the numbers of displaced people, and argued offering support to refugee camps would be more effective than resettling a small portion of the refugee population.

“I’ll use the example of Syria, where we were one of the most generous nations by taking 12,000 [people],” Dutton said.

“Plenty of countries promised places but never delivered. We offered 12,000 permanent places in addition to what we were doing within the refugee humanitarian program. So there are 5 million people who are displaced in Syria, so the question is whether any country would be able to provide a safe haven for those people.

“Clearly, given the current commitments from the US, from Canada, from European nations, Middle Eastern states, it’s not possible for those 5 million people to be relocated.

“Providing a greater focus on support, particularly around education for young women, young boys, living in camps like Zaatari [in Jordan] is in my judgement a better way of providing that humanitarian assistance than what some people describe as token efforts of 12,000 out of 5 million people. 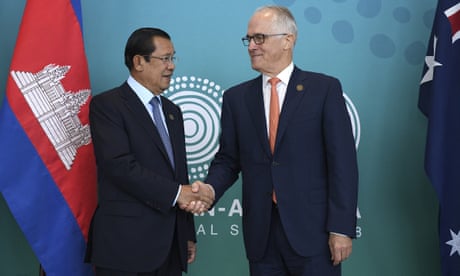 “I think there is a need for like-minded countries to look at whether a convention designed decades ago is relevant today.”

Madeline Gleeson from the Kaldor Centre for International Refugee Law at UNSW said resettlement was not “token” for those who benefitted from it.

“It can be a lifeline – offering protection to vulnerable people in urgent need of it. It provides an alternative to dangerous onwards journeys, including by sea. And it is an important way for countries like Australia to demonstrate solidarity and responsibility-sharing with those countries that host the greatest numbers of refugees. While it may not be a perfect system, the way to expand its benefits is by offering a greater number of resettlement places and supporting complementary programmes such as community sponsorship, not by diverting funds elsewhere.”

Gleeson said refugee protection was not a dichotomy of resettlement or international support.

Financial and humanitarian support for host countries by providing services in refugee camps overseas was critically important, and more funding from Australia would be welcomed.

“However, this need is additional to resettlement, and one cannot replace the other.

“Given that Australia has already closed itself off to people arriving directly, pulling back from resettlement would effectively send the message that we no longer see ourselves as a welcoming country to refugees – no matter how they get here. If previous governments had taken this approach, and we had missed out on the many opportunities earlier refugee arrivals brought to this country, we would be a poorer nation for it.”

Dutton, who has been immigration minister since 2014 and retains the responsibility under his expanded position as home affairs minister, said he believed a national debate was under way about the size of Australia’s immigration intake. His own view is that the “national interest should prevail”, and that the size of the annual intake should be determined by the “economic and social imperative”.

“We need to bring in younger people like most western democracies. We want to bring them in as young as possible, which is sometimes controversial because people want to bring, particularly through the family program, people of an older age in. But we want people to pay taxes and be contributing for as long as possible.

“There are people in my own party that would argue for or against our position, but I’m pretty comfortable in terms of the economic and social settings where we have the program now.

“I do think we need to look at, given we have huge concentrations of people in greater Sydney and greater Melbourne, ways in which we can try and find an incentive to move people out into the regions.

“The concentration in capital cities, I think, causes some tension within the immigration debate. You can’t tell people to reside within a particular postcode [but] maybe there’s a way we can build incentives into the system so that people do disperse; I think that would relieve some of the tension.”

“[Australia’s refugee and humanitarian program] is not discriminatory against people of any skin colour or religion. I mean, we bring in people from literally four corners of the earth under that program.”

Asked whether he had any intention of changing Australia’s longstanding non-discriminatory immigration policy, Dutton said: “no, of course not”.