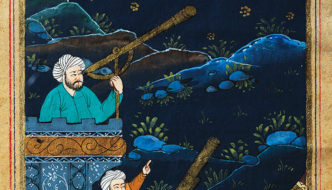 Fake miniatures depicting Islamic science are now found in the most august of libraries, museums, and history books

The achievements of Islamic scientists are widely touted in the West today. Many people have pointed out that much of this is trumped-up, with the innovations of dhimmi Jews and Christians living in Islamic societies being touted as achievements of Islam, and with some supposed Islamic achievements simply being fabricated. This article reveals that this fabrication is actually an entire industry, and has fooled reputable authorities all over the West, so avid is today’s establishment Left to make people think well of Islam and not be concerned about jihad and Islamization.

“Forging Islamic science: Fake miniatures depicting Islamic science have found their way into the most august of libraries and history books. How?” by Nir Shafir, Aeon, September 11, 2018 (thanks to the Geller Report):

As I prepared to teach my class ‘Science and Islam’ last spring, I noticed something peculiar about the book I was about to assign to my students. It wasn’t the text – a wonderful translation of a medieval Arabic encyclopaedia – but the cover. Its illustration showed scholars in turbans and medieval Middle Eastern dress, examining the starry sky through telescopes. The miniature purported to be from the premodern Middle East, but something was off.

Besides the colours being a bit too vivid, and the brushstrokes a little too clean, what perturbed me were the telescopes. The telescope was known in the Middle East after Galileo developed it in the 17th century, but almost no illustrations or miniatures ever depicted such an object. When I tracked down the full image, two more figures emerged: one also looking through a telescope, while the other jotted down notes while his hand spun a globe – another instrument that was rarely drawn. The starkest contradiction, however, was the quill in the fourth figure’s hand. Middle Eastern scholars had always used reed pens to write. By now there was no denying it: the cover illustration was a modern-day forgery, masquerading as a medieval illustration.

The fake miniature depicting Muslim astronomers is far from an isolated case. One popular image floating around Facebook and Pinterest has worm-like demons cavorting inside a molar. It claims to illustrate the Ottoman conception of dental cavities, a renditionof which has now entered Oxford’s Bodleian Library as part of its collection on ‘Masterpieces of the non-Western book’. Another shows a physician treating a man with what appears to be smallpox. These contemporary images are in fact not ‘reproductions’ but ‘productions’ and even fakes – made to appeal to a contemporary audience by claiming to depict the science of a distant Islamic past.

From Istanbul’s tourist shops, these works have ventured far afield. They have have found their way into conference posters, education websites, and museum and library collections. The problem goes beyond gullible tourists and the occasional academic being duped: many of those who study and publicly present the history of Islamic science have committed themselves to a similar sort of fakery. There now exist entire museums filled with reimagined objects, fashioned in the past 20 years but intended to represent the venerable scientific traditions of the Islamic world.

The irony is that these fake miniatures and objects are the product of a well-intentioned desire: a desire to integrate Muslims into a global political community through the universal narrative of science. That wish seems all the more pressing in the face of a rising tide of Islamophobia. But what happens when we start fabricating objects for the tales we want to tell? Why do we reject the real material remnants of the Islamic past for their confected counterparts? What exactly is the picture of science in Islam that are we hoping to find? These fakes reveal more than just a preference for fiction over truth. Instead, they point to a larger problem about the expectations that scholars and the public alike saddle upon the Islamic past and its scientific legacy….