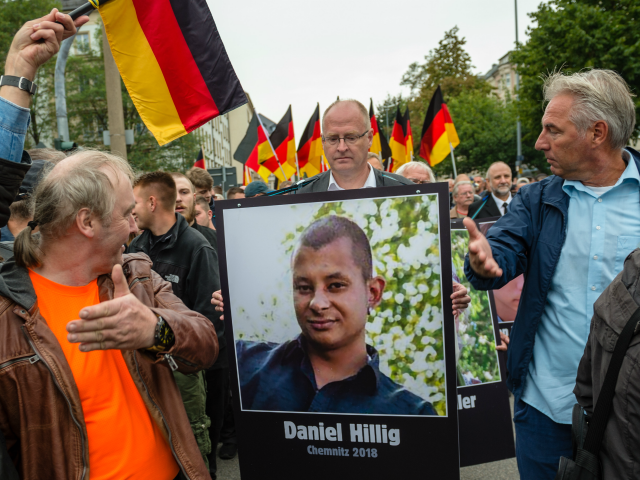 There are “good reasons to believe” that video footage of extremists hunting foreigners in Chemnitz are fake news, according to Germany’s domestic intelligence chief, undermining Angela Merkel’s insistence that protests against killer migrants were marked by “hate and… the persecution of innocent people”. The intelligence boss’ comments came after T-Online, noted reports relating to a photograph from the protest featured heavily in media coverage of the event, which appeared to show an individual doing a ‘Hitler salute’.

Germany’s biggest news portal, T-Online told readers it had been noticed that the man in the image was inked with a tattoo celebrating left-wing German terror group the Red Army Faction, and said it was being suggested elsewhere online that the individual was a far-left agitator seeking to discredit the Chemnitz demonstrators.

Allegations of right-wing mobs attacking people who looked foreign became international headline news, with global media outlets claiming demonstrations in Chemnitz against migration policy — sparked by the murder of a Cuban-German man — had seen “the spectre of fascism return to Germany”.

Expressing scepticism over the extent on extremism claimed to be on show at the demonstrations, which attracted thousands of Germans, Saxony premier Michael Kretschmer told the state parliament on Wednesday: “There was no mob, there was no hunt and there was no pogrom in Chemnitz.”

This contradicted Merkel’s assessment of the situation, which was that “We have video footage showing very clearly hatred and therefore the persecution of innocent people.”

While Maassen’s comments were welcomed by some politicians, including German interior minister and CSU leader Horst Seehofer.

The security boss received bitter criticism from left-wing figures, however, with Die Linke (The Left) leader Katja Kipping demanding he be sacked, and accusing the BfV boss of acting as an agent of the anti-mass migration Alternative for Germany (AfD) party.