Siddiqullah Chowdhury said: “For us, our holy scripture, the Quran Sharif, is supreme and if any constitutional provision or any law contradicts the Quran, then our scripture will prevail and not the law or Constitution.”

He was referring to India’s new law forbidding Islamic instant divorce. “No one will adhere to it, but will follow the religion and the holy book,” said Chowdhury, and he is doubtless correct.

Officials in Western Europe and North America should consider carefully the fact that Islamic law mandates death for criticizing Islam, institutionalizes an inferior status for women and non-Muslims, allows for polygamy, calls for the killing of apostates, and contains other provisions that contradict American law. Do Muslim leaders in the U.S. also believe that the law of the land should be set aside if it contradicts the provisions of Islam? Does anyone even dare ask them, or would simply asking the question itself be “Islamophobic”? 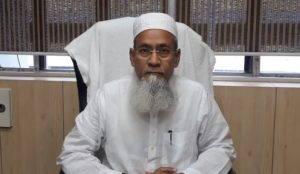 Siddiqullah Chowdhury, a Minister in West Bengal government, took the protest against the Centre’s ordinance on triple talaq to another level by saying that the Constitution is subservient to the Quran.

Chowdhury is the Minister of Mass Education and Library in the government led by Chief Minister Mamata Banerjee. He is also the state president of the Jamiat Ulema-e-Hind.

According to a report in The Indian Express, Chowdhury said that the Quran will prevail over the Constitution if any constitutional provision or law contradicts the Quran.

“For us, our holy scripture, the Quran Sharif, is supreme and if any constitutional provision or any law contradicts the Quran, then our scripture will prevail and not the law or Constitution,” Chowdhury was quoted as saying by The Indian Express.

Interestingly, Chowdhury accused the Bharatiya Janata Party (BJP) of playing the religion card and toying with the Constitution.

Referring to the Ordinance introduced on Wednesday that made the practice of triple talaq a penal offence, Chowdhury said that it will “have no effect on Muslims”.

“No one will adhere to it, but will follow the religion and the holy book,” he said.

Drawing attention to the rising cases of violence against women, he said that the Centre is doing nothing to protect the women but “are hurting the sentiments of Muslims for cheap vote bank politics”….

Siddiqullah Chowdhury is a Minister in the West Bengal government, a State Government in the Union of India.

He is not some Imam or ordinary Muslim in India.

He acts as if infidel’s laws don’t matter.

He believes his treachery will not be punished. He might be wrong on this one. We shall see.