They’re not gone yet. It will be quite an effort to eject them.

The Greek island of Lesvos will receive no immediate relief from Athens for its migrant problems. The mayor of the island recently informed the Greek migration minister that there were now 10,000 migrants residing in the Moria camp, with more coming every day.

In other news, Cyprus — which has a larger number of migrants per capita than any other EU member state — has appealed to the EU for help with its own migration problems.

The Paris Climate Agreement is a dead non-binding treaty walking.

This week the UN’s clown caravan has moved to Bangkok, Thailand – the preliminary to an even bigger meeting, COP24, in December in Katowice, Poland. 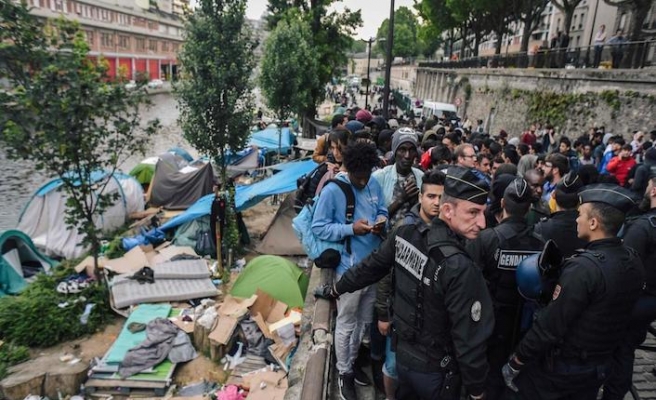 French police on Thursday evicted nearly 500 migrants and refugees from a makeshift camp at Grande-Synthe in the north of the country. The camp residents, mostly Iraqi Kurds, were sent to reception centers elsewhere in the department, according to local authorities.

Erdogan’s got her over a barrel. Norway Looks to Strip 1,600 Somalis of Refugee Status, Send Back to Somalia

How can you be classified a “refugee” when you’ve shopped half way around the world from Somalia to Norway. Have we become this foolish?

The Norwegian government has come under fire from pro-migrant groups after announcing it would be removing refugee status from some 1,600 Somalians and sending them back to Somalia, noting the situation in the country had improved.

The Norwegian government has said that Somalia now has a more stable government and the refugees no longer need the protection of the Norwegian state, Nettavisen reports.

Several pro-asylum seeker groups have spoken out against the move accusing the government of breaking international asylum rules, such as the Norwegian Organization for Asylum Seekers (NOAS) which argued that the conditions in Somali have not changed enough to justify stripping the migrants of refugee status.

“The Somali state can not offer effective protection,” said senior advisor to NOAS André Møkkelgjerd. The organisation is also challenging the decision to remove the refugee status of one Somali in court.

Norwegian State Secretary Torkil Åmland commented on the opposition to the move saying, “The fact that some organisations disagree with the strict asylum and immigration policy that this government is leading is not the same as breaking the rules.”

“The whole basis of the refugee convention is that there are only people with real protection needs that are entitled to stay. Neither the Constitution nor our international obligations mean that a foreign national is entitled to a particular type of permit in Norway,” Åmland added.

Migrants in Norway have become a strain on the country’s generous welfare system with individuals from migrant backgrounds making up half of the welfare recipients in the country.

A report from the Ragnar Frisch Centre for Economic Research released last year also revealed that the longer migrants were in Norway, the more likely they were to be dependent on state handouts and less likely to be employed.

Despite the Norwegian people overwhelmingly resisting mass migration in previous opinion polls, the European Union has pushed for the country, which is not a full member of the bloc, to take in more migrants from Africa.