Twitter has faced a backlash after adverts advocating female genital mutilation on children were viewed more than 30,000 times after being promoted on the website.

The tweet featured a video of group member Arwa Sohangpurwala saying: ‘My daughters have also undergone khafz, and they’re growing up as perfectly as other children of their age.As a mother, I can never do anything to harm them.’ 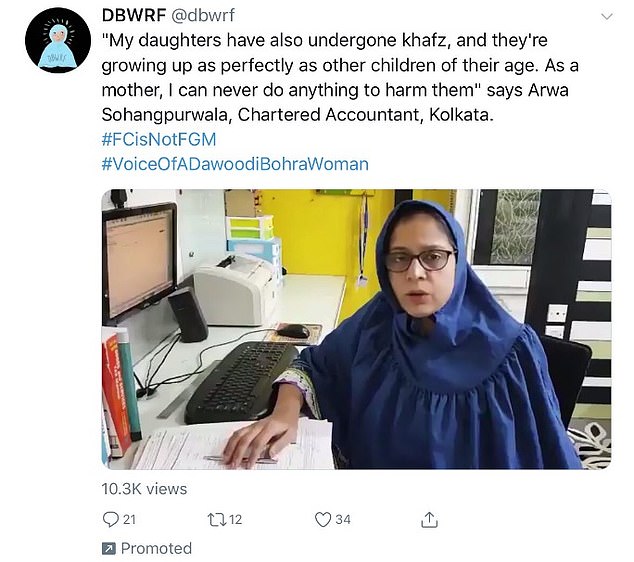 But because the group paid for the tweet to be ‘promoted’, it showed up on the timelines of users who didn’t even follow the Dawoodi Bohra account.

Twitter users were quick to slam the advert. Esmael Omar tweeted: ‘Speak for yourself, woman. Don’t speak on behalf of innocent girls.

‘FGM is FGM no matter how you want sugar coat it. Leave alone cutting – even touching the female genitalia of a girl is still child abuse. Twitter must explain why they sponsored such a message.’

Paul Hart added: ‘Did you ask your daughters beforehand or did YOU make the decision to mutilate their genitals for them? Sick.’

The law on female genital mutiliation

More than 200 million girls and women are estimated to have experienced FGM, a life-threatening procedure that involves the partial or total removal of a woman’s external genitalia.

Girls aged 14 and younger represent 44million of those who have been cut, most commonly in Gambia, Mauritania and Indonesia.

The procedure is mostly carried out on young girls between infancy and 15.

Once girls have been cut, they are deemed ready for marriage and taken out of school – but FGM causes health problems and can be fatal.

It is practised by Muslim and Christian communities in some countries, but it is not mentioned in the Koran or Bible.

That’s an oft repeated lie from the mouths of Mohammedans. Christian communities do not practice FGM. All four schools of Islam do promote it. Some see it as compulsory.

The practice is illegal in Britain, but around 137,000 girls from the UK are thought to be taken to countries that still perform the procedure.

A Twitter spokesman said: ‘This was a promoted tweet and was removed for violation of our policies.’

The Dawoodi Bohra Women for Religious Freedom group – a branch of the Shi’ite Muslim community – promotes female circumcision and claims that it has been ‘wrongly classified as female genital mutilation’.

It also claims the procedure involves ‘removal of a speck of superficial skin, a simple gentle process in which there is negligible, if any, pain’.

However, the World Health Organization still classifies the smallest form of removal as type 1 FGM.

The DBWRF group says it is ‘dedicated towards conserving and guarding the cultural and religious rights of Dawoodi Bohra women’, a sect in Shia Islam.

The organisation was formed in May 2017 and is said to represent tens of thousands of women who ‘strongly believe in preserving their religious and cultural heritage’.