THEIR LEADERS ARE BOSSY CHILDREN

.
Avi Yemini’s video of adults attending Friday’s kiddies against karbon rally in Melbourne has it all, from bewildered scientists and dumbfounded greybeards to a classic example of Victorian police hypocrisy.
.

Someone who identifies as an expert proclaims: “I’m a scientist and I know what I’m talking about.” A few seconds later, in response to an excellent question from Yemini, the man falls silent.

“You just read what they’ve got to say there,” announces an awed oldtimer. “The wit of some of those posters!” Yes. Just read them.

A fan of the karbon kiddies is impressed: “There’s a girl up there with a sign that says ‘I’m nine years old and I understand the science better than parliament.’” Sure she does. Ask her how much of the planet’s human-created carbon dioxide is generated by Australia.

“You’re not listening to 97 per cent of scientific opinion,” scolds a greybeard, evidently unaware that the 97 per cent claim is a myth.

Then comes the finest moment of them all. Two Victorian police officers confront Yemini and accuse him of “breaching the peace”.

Recall that when leftist protesters turned up to disrupt a peaceful talk by Canadian conservative Lauren Southern, Victorian police hit her with a $68,000 protection bill.

But when one inquisitive chap appears at a leftist rally to ask a few polite questions, he’s asked to move on. After being denounced by protesters as a fascist and a Nazi.

There are several UPDATES on Tim Blair’s blog:

Replace “climate change” with “Islamic immigration”. It would also be an issue “bigger than them”. But would Amy still feel such pride? 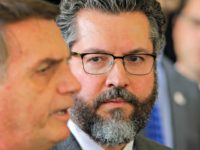 Brazil’s new foreign minister said this week that his “main mission” in office is to combat the Marxist ideology of the preceding regime, including “climate alarmism” and abortion.

“Experts”  at the very heart of the global warming establishment – the ones whose “science” and data forms the basis of the $1.5 trillion a year global climate change industry – are just a bunch of clueless amateurs completely out of their depth.

The discredited “climate scientist” and fake Nobel-prizewinner has released a batch of his old emails, which you can access here.

Mann gives a defiant account of his decision at the Soros-funded global warming propaganda site DeSmogblog.

By releasing his emails, Mann claims, he will be:

(a) using these emails to show how scientists are making an honest and diligent effort to understand the science underlying Earth’s climate system,

(b) showing how scientists are engaged in the good-faith give-and-take that is central to the scientific enterprise, which includes appropriate skepticism and critical assessment not only of other scientists’ work but our own, as evident through internal deliberations between the scientists, and

(c) demonstrating the understandable frustration that scientists have with those who intentionally misrepresent them and their research for the purpose of advancing an ideological agenda.

But actually, no, it’s none of those things. He’s doing it because he’s going to have to anyway. Energy and Environment Legal Institute has been trying for years to get the University of Virginia to release Mann’s old emails from the six years he spent there as a professor. That’s because E & E believes, not unreasonably, given Mann’s snout-deep involvement in the Climategate scandal, that the emails may shed light on the nefarious activities of the activist scientists at the heart of the Climate Industrial Complex.

Mann is releasing the emails pre-emptively in order to cast himself in a good light. Unsurprisingly, he has only released a portion of his total correspondence. Some have been redacted, some have attachments missing, some have been held back completely because reasons…

Still, it’s not looking good for Mann. There’s nothing as yet to rival the skullduggery exposed in Climategate. But what we see pretty clearly is Mann torturing his dubious data till it screams and becoming very defensive when questioned.

Here is one of his colleagues having conniptions about Mann’s methodology:

Here is Mann admitting to having adjusted his data post hoc in order to give the correct, alarmist narrative:

Here is another of his colleagues, starting to panic that maybe the evidence for man-made global warming theory is already (in 2000) looking shakier than they’d like:

This was one of the great revelations of the Climategate emails, and it’s now reinforced here: the experts at the very heart of the global warming establishment – the ones whose “science” and data forms the basis of the $1.5 trillion a year global climate change industry – are just a bunch of clueless amateurs completely out of their depth.

I’ll keep you posted if any more interesting snippets emerge – those that Mann hasn’t already “accidentally” deleted, of course.

One thought on “Karbon Kiddies”