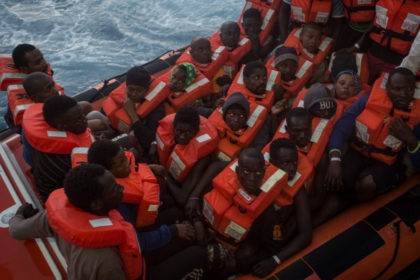 Pope Francis Laments ‘All Those Migrants’ Who ‘Find Doors Barred’

“All that fear and prejudice!”

Pope Francis enumerated the many “afflictions” facing “our turbulent world” Friday, the first of which is the plight of migrants.

“All those immigrants, forced to leave their own homelands and to risk their lives, lose their lives, or survive only to find doors barred and their brothers and sisters in our human family more concerned with political advantage and power!” the pope exclaimed in his yearly address to members of the Roman Curia gathered in the Vatican for an exchange of Christmas greetings.

“All that fear and prejudice!” he said. “All those people, and especially those children who die each day for lack of water, food and medicine! All that poverty and destitution!”

Does this pious hypocrite not consider the possibility that Asia Bibi, the Christian woman who spent eight years on death row for “blasphemy” in Pakistan and is now in hiding there as Muslims who want to murder hunt for her from house to house, feels the pain of not being welcomed into the Vatican?

Pope Francis underscored the travails of persecuted Christians around the globe Friday, declaring that the Church is living a new period of martyrdom.

We are experiencing “a new age of martyrs,” the pope told members of the Roman Curia in his yearly Christmas address to them. “It seems that the cruel and vicious persecution of the Roman Empire has not yet ended.”

“A new Nero is always being born to oppress believers solely because of their faith in Christ,” he said.

Nero was a dilettante compared with Muhammad. Anyway, this is not about the Roman Empire……it’s about islam.

And not all Catholic priests sucked  the Kool Aid, like this traitor pope:

Italian priest Father Alfredo Morselli has hit back against those who compare Jesus Christ to an illegal migrant, saying he was more akin to the persecuted Pakistani Christian Asia Bibi.

Many progressive and left-wing figures, including head of the Roman Catholic church Pope Francis, have compared the events surrounding the birth of Christ to those of illegal migrants entering Europe today.

But Father Morselli said he rejected the idea, explaining that “Christ was a persecuted person, more like Asia Bibi or Catholics betrayed and sold off to the Chinese government,” Il Giornale reports.

Back to the roots: Salvini’s Italy to Promote Display of Crucifix, Nativity Scene in Classrooms — ‘Part of Our Heritage, Identity’

So, according to pope Francis, this rambling dolt, its our fault that Mohammedan savages breed like mad monkeys and can’t feed their out of control populations. And its our fault because we look after our own…. how selfish!

“All those persons who even today are systematically tortured in police custody, in prisons and in refugee camps in various parts of the world!” he added.

Pope Francis has made the immigration question a hallmark of his five-and-a-half year pontificate, urging nations to open their hearts and their lands to those seeking a better life. He has also suggested that insisted that a failure to welcome migrants is rooted in selfishness and fueled by “populist rhetoric” and xenophobia.

Last Tuesday, the pope commemorated International Migrants’ Day with a Tweetcomparing today’s migrants with the Christ child in Bethlehem, whose parents found “no room at the inn.”

“Jesus knows well the pain of not being welcomed,” the pope said. “May our hearts not be closed as were the houses in Bethlehem.”

On the same day, the Vatican released the pope’s message for the World Day of Peace, in which he denounced “political vices” such as nationalism, xenophobia, racism, and lack of concern for the environment and decried attempts to blame national woes on immigrants.

Our times are “marked by a climate of mistrust rooted in the fear of others or of strangers, or anxiety about one’s personal security,” the pope lamented, which is expressed at the political level in “attitudes of rejection or forms of nationalism that call into question the fraternity of which our globalized world has such great need.”

“Political addresses that tend to blame every evil on migrants” are unacceptable, he said, since they manifest a “strategy of fear” and stoke an “escalation of intimidation.”

Pope Francis has also been a powerful advocate for the U.N.’s Global Compact for Safe, Orderly and Regular Migration (GCM), which was approved in Marrakesh last week.

The GCM provides “a framework for the whole international community,” the pope toldthousands of people gathered in Saint Peter’s Square for his weekly Angelus message, and can help nations to work with “responsibility, solidarity, and compassion toward those who, for various reasons, have left their country.”

Earlier this month, the Vatican’s department for Migration and Refugees issued a statement praising the GCM, saying that the Holy See “will join many other governments of the world to celebrate the adoption of this pact, the first international agreement on migration at the global level.”