‘I was raped, starved and kept as a prisoner’: How an Australian woman, 30, travelled to Pakistan to meet the man of her dreams… only for him to lock her up, force Islam upon her and abuse her daily

An Australian woman who was lured to Pakistan by the false promise of a lavish life with the man of her dreams was instead locked up, beaten and used as a sex slave for months.

Lara Hall, 30, became the victim of a predatory online groomer who raped her repeatedly over several months and kept her locked up in squalor.

When she managed to contact the Australian commission in Pakistan she claimed she was met with a ‘lacklustre’ response and offered only limited advice.

Describing her ‘living nightmare’ to Daily Mail Australia, Ms Hall said she was groomed by a man called Sajjad, who promised her a lavish life in a Spanish-style villa in Lahore. 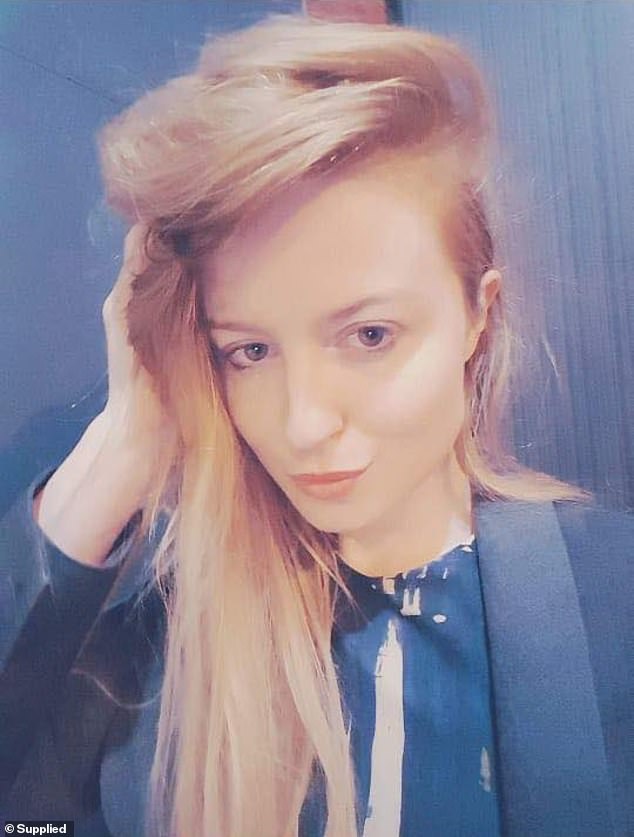 Lara Hall (pictured) 30, travelled to Pakistan to meet the man of her dreams… only for him to force her into Islam and treat her as a sex slave

Her nightmarish experiences started from a chance meeting in 2013.

Ms Hall, having completed a law degree at the University of Notre Dame and working in a prestigious position, struck up a friendship on a train with a Pakistani woman called Rhianna in 2013.

Ms Hall offered to teach her English and over time she became an honorary member of the woman’s family who told her how much they adored her and often brought her little gifts.

‘I didn’t come from a functional family, so it was everything I was craving,’ Ms Hall said. 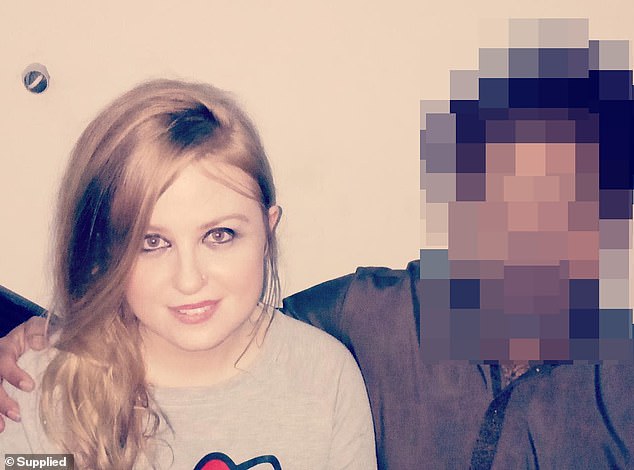 Why would the idiots from the Daily Mail protect the perp? 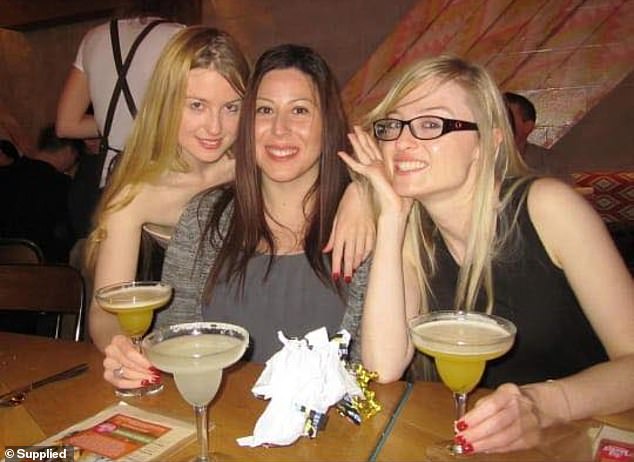 One night Ms Hall was on a Skype call to Rhianna’s family in Pakistan, and made her first contact with Sajjad, who was a relative.

The pair connected on Facebook and talked intermittently over the next few years. Sajjad claimed he was also a lawyer and always appeared interested in her life and was eager to make her happy.

Sajjad’s friendship came at a challenging time for Ms Hall, who had battled  obsessive compulsive disorder and still felt the legacy of a difficult childhood.

Despite her burgeoning legal career and strong professional prospects, her troubles mounted to the point where she suffered a breakdown. 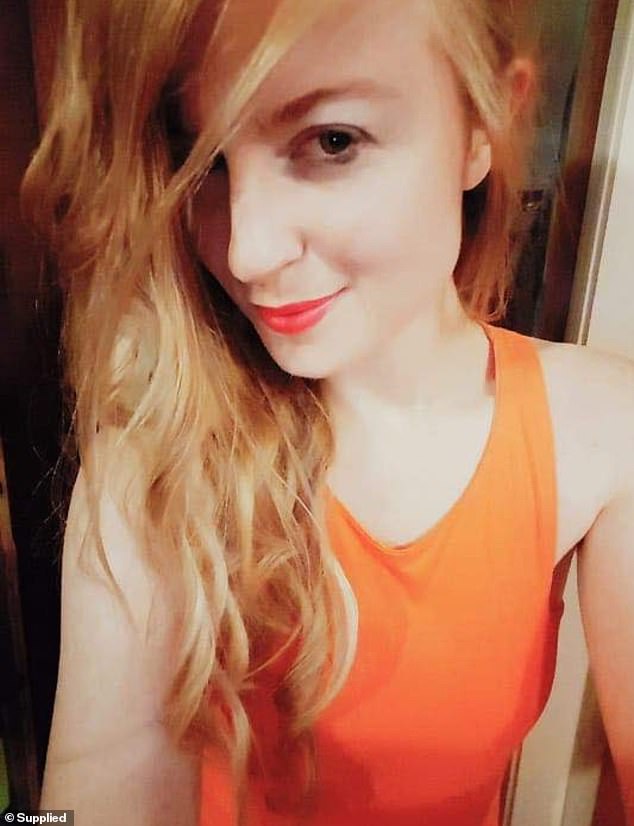 One night Ms Hall was on a Skype call to Rhianna’s family in Pakistan, and made her first contact with Sajjad, who was a relative

‘Sajjad came into my life at just the right time, when I was completely vulnerable,’ Ms Hall said.

‘He promised a grand, amazing and happy life if I would ever consider him.

‘He said he had five houses and showed a purchase contract for a Spanish house he said we could live in and that I could decorate however I wanted – he even sent me pictures of the house.

‘I remember asking him if he would ever lie to me and he said “no” – he was very attractive and seductive.

‘I was seduced by the promise of this amazing life with him. My life in Sydney was so s**t at the time, so I thought maybe I would give it a go.

‘He would always say “I’ll fill all your blank spaces”. It was one of his favourite sayings. And I’d known his family here for a long time.’ 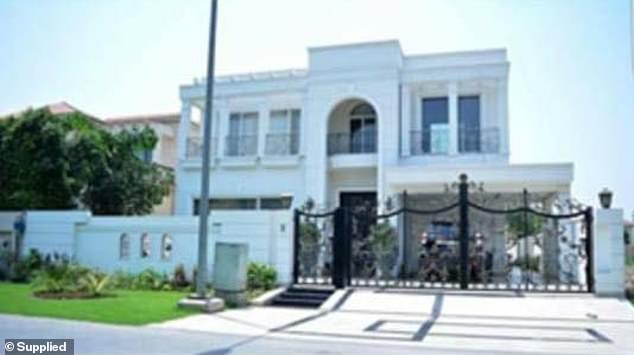 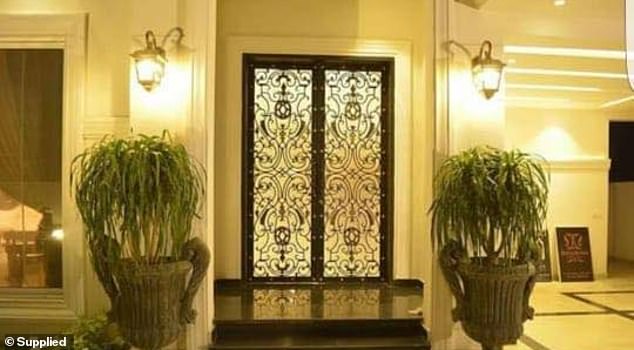 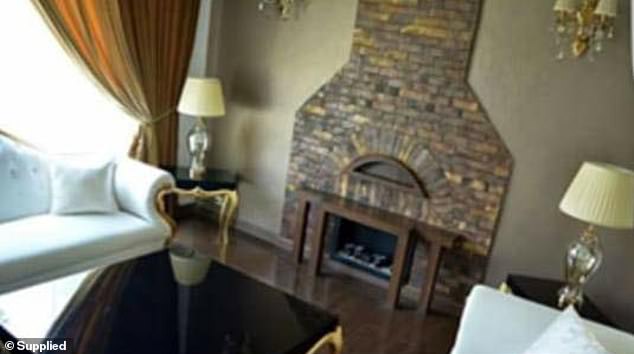 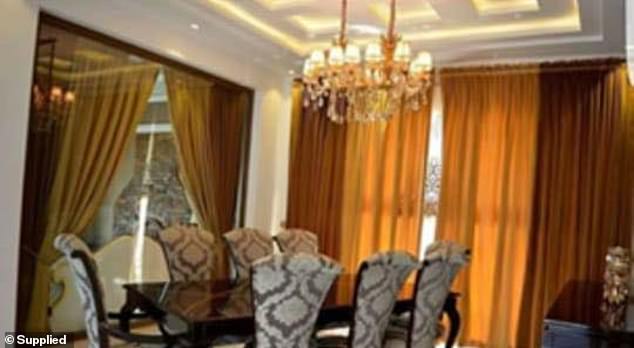 Sajjad was also in contact with Ms Hall’s family. Over Facebook he struck up a friendship with her twin, Amy. He also sent her grandmother emails promising he would keep her safe. He offered protection and comfort – the security Ms Hall had always craved.

Amy was over the moon for her sister.

‘He was very compassionate, empathetic, always there to listen, issuing grandiose promises -like a friend, a very trustworthy person,’ Amy said.

In early 2018 Sajjad invited Ms Hall to his brother’s wedding in Pakistan. She saw it as the perfect chance to see if their online romance could turn into real-life love.

Intoxicated by the promise of a beautiful life and seduced by the man of her dreams, Ms Hall took the plunge and on April 23 last year she flew 18 hours to Lahore.

‘The house was certainly not like anything in the pictures, I was taken back when I arrived,’ Ms Hall said.

‘There were twenty people living in five bedrooms. He said they were just there for the wedding. It was filthy.

‘But he was being so nice, I still thought he was a dream come true.’

Over the next few weeks Sajjad admitted that he had fabricated the Spanish villa and that he was not the man he had claimed to be.

‘All feelings of love died. Then the abuse started,’ she said.

‘Sajjad raped me and his brother attempted to rape me on multiple occasions. I was a kept woman, I was denied feminine hygiene products and had to bleed freely, I was starved over long periods of time – on one occasion up to 14 hours.’ 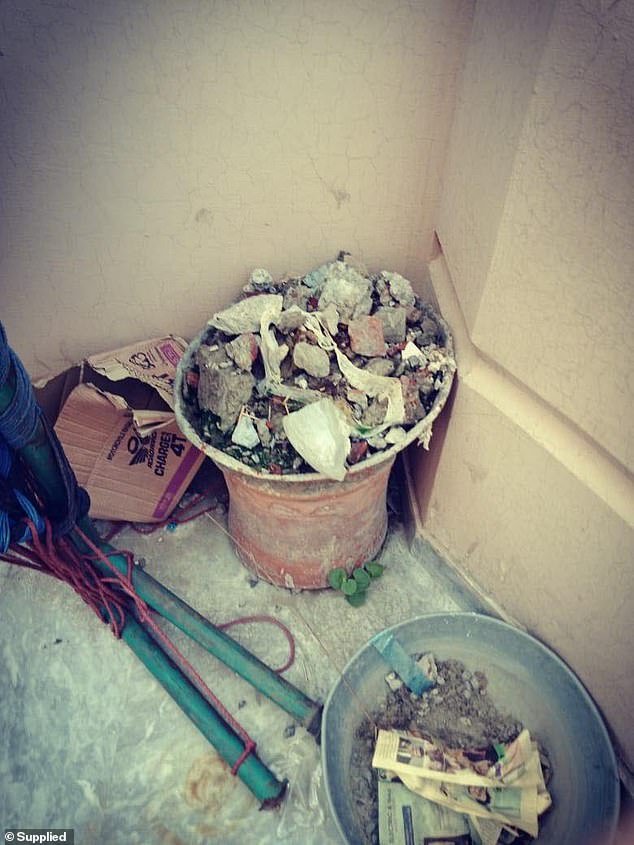 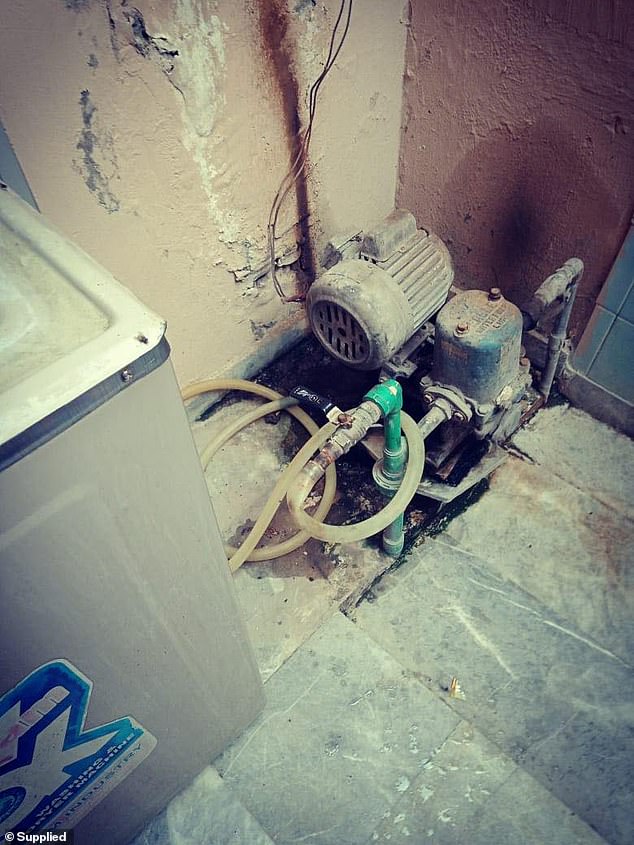 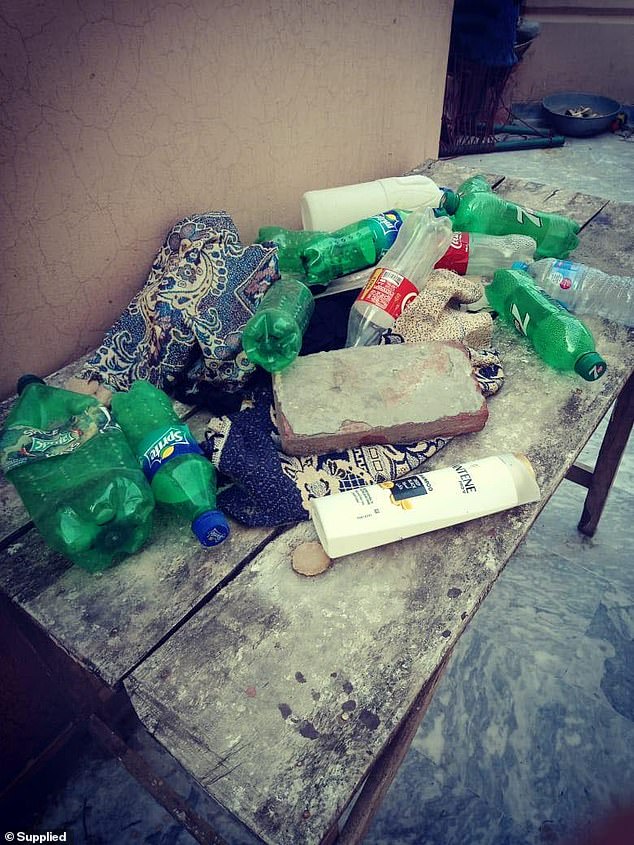 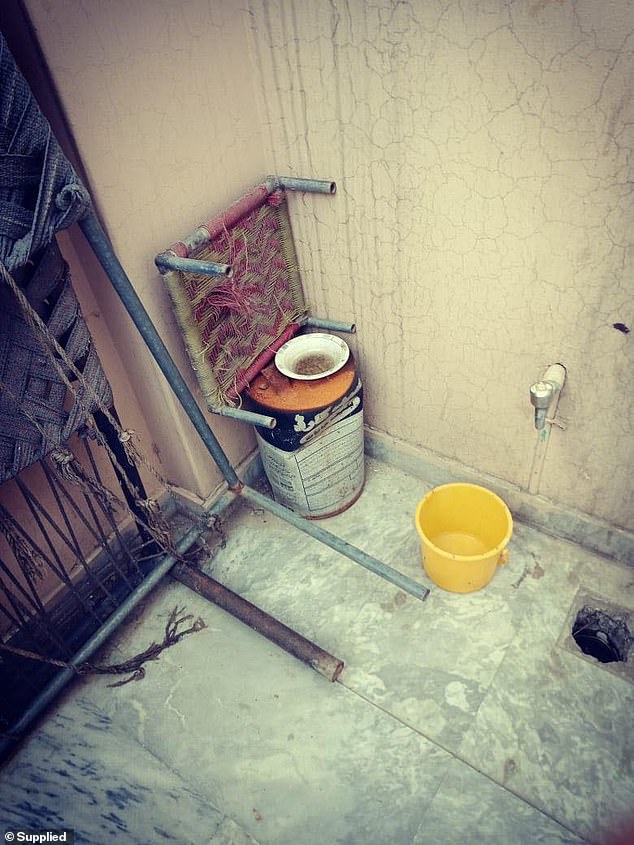 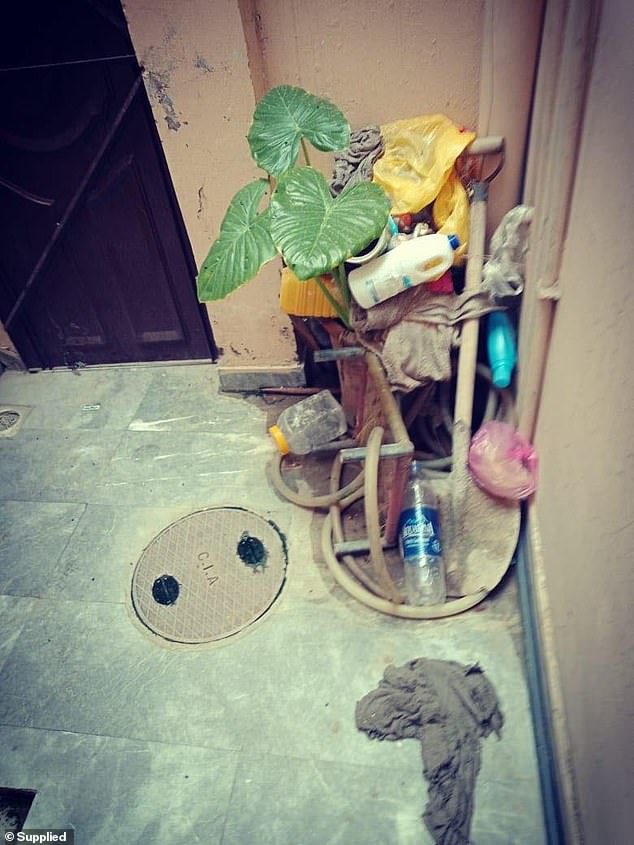 Ms Hall continuously refused Sajjad’s marriage proposals, and her refusal to convert to Islam only enraged him further.

‘I was made to present myself naked after a shower. One time I had a bit of shampoo still in my hair after showering and Sajjad grabbed me, telling me I was an idiot and slammed my head into the basin.

‘I was once made to lay naked in the bed with my legs open.

‘One time I was ill he thought it was “hilarious” – as I was vomiting – to come up and try to rape me while I was hurling.

‘I had come all the way to Pakistan to be a prisoner.’

Ms Hall’s 30-day visa had expired, and Sajjad claimed he had contacts working on a renewal but told her in the meantime she couldn’t leave the house or she risked arrest. 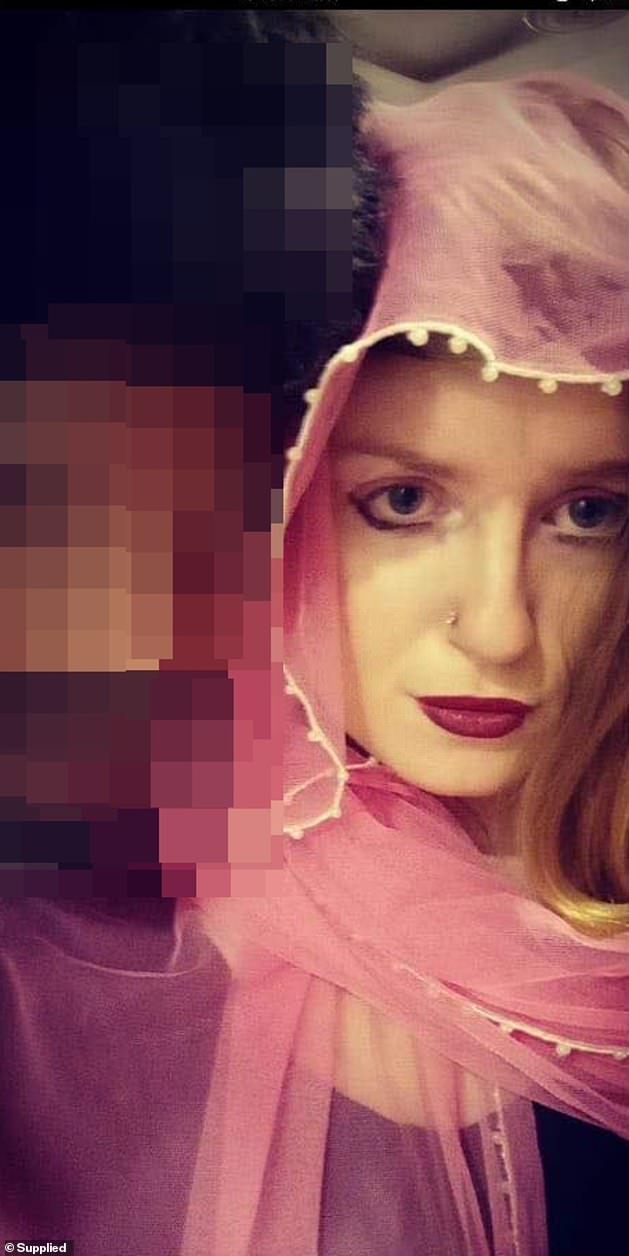 She managed to contact the Australian consulate and High Commission, thinking her reports of sexual assault would trigger an urgent response.

She was disappointed by their ‘lacklustre’ attitude, saying she was told to seek safety, but she was scared to go to the police due to her visa overstay and for speaking out against a local man.

A Department of Foreign Affairs and Trade spokesperson confirmed to Daily Mail Australia that it provided consular assistance to an Australian woman last year but would not divulge details due to ‘privacy obligations’.

So Ms Hall planned her own escape. 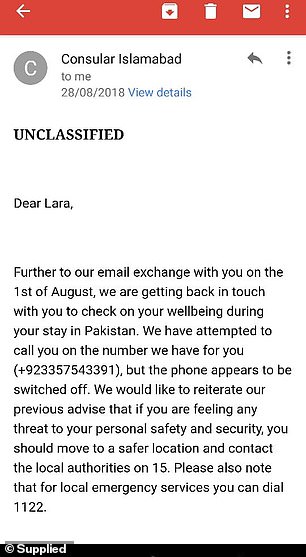 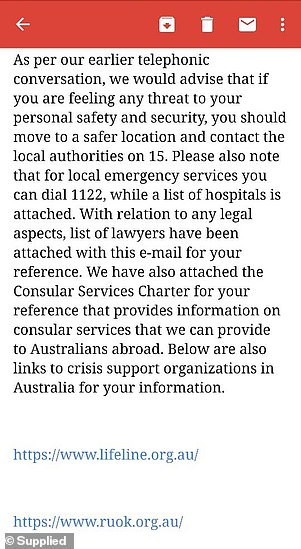 Ms Hall was disappointed by the ‘lackluster’ attitude from the Australian consulate, saying she was told to seek safety, but she was scared to go to the police due to her visa overstay (pictured are screenshots of her correspondence with the consulate) 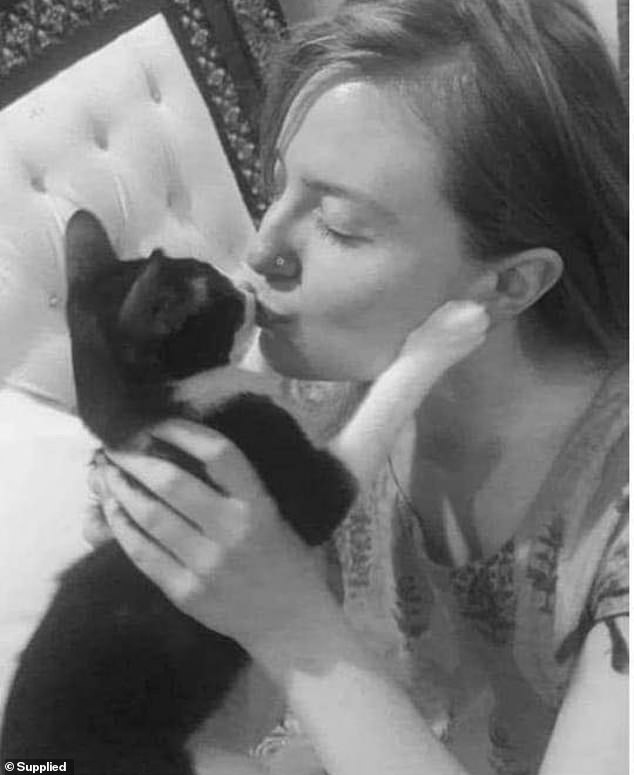 ‘She approached me via Facebook and these social media channels are usually not real, so after doing some due diligence that she was a girl in need of help, I realised the situation that she was staying at a house somewhat against her will,’ Dr Rafiq told Daily Mail Australia.

One night after Sajjad threatened to ‘delete’ her, Ms Hall barricaded herself in a bedroom and worked up the courage to call the police.

When they arrived on the doorstep Sajjad begged her to tell them she was fine but Dr Rafiq got on the line and she was escorted to the local station.

She was released into the care of Dr Rafiq and spent two weeks at the AFOHS club with Pakistani’s elite military and government community.

Dr Rafiq said he offered to help partly because he did not want Ms Hall leaving with a completely bad image of Pakistan’s people. 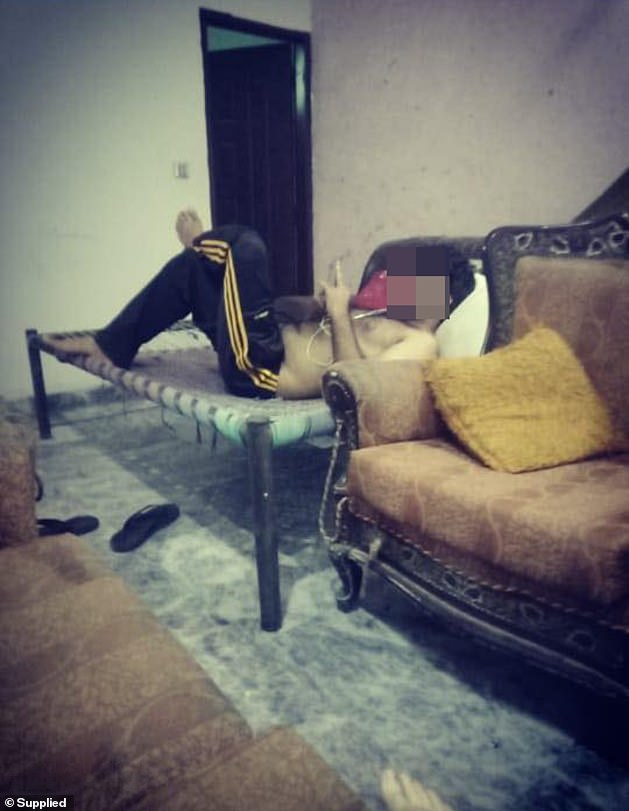 One night after Sajjad (pictured here in their home)  threatened to ‘delete’ her, Ms Hall barricaded herself in a bedroom and worked up the courage to call police

‘I find her extremely genius and positive person,’ he said.

‘But I was disappointed and somewhat angry at her for coming to a totally strange country and strange people whom she met only through internet.

‘Our youth must learn that the internet is not a safe place and we must not believe fantasies which someone portrays on internet.’

After two weeks Ms Hall moved out to stay with another friend she had made online, Rafi, who offered her safe housing.

Concerned about how she overstayed her visa, Ms Hall and Rafi flew to Islamabad where the Ministry of Interior has its headquarters. At first she was threatened with detention for overstaying her visa but after some pleading she was given a $US400  fine and instructed to leave within 10 days. 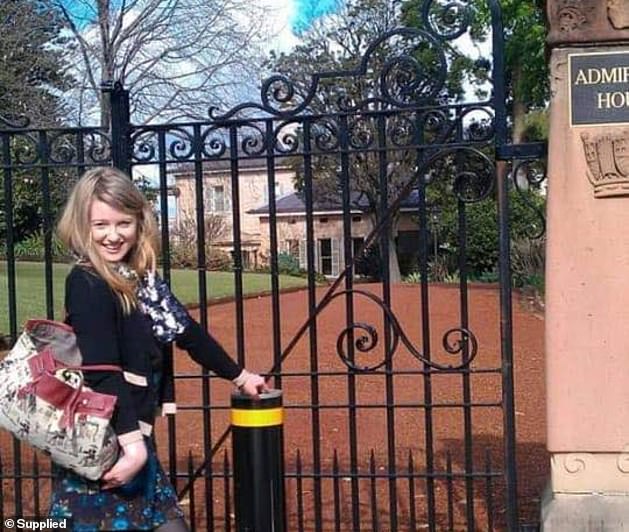 After two weeks at the compound Ms Hall (pictured here during her time at university) moved out to stay with another friend she had made online, Rafi, who offered her safe housing

With not enough money to feed herself, let alone purchase an international flight, Ms Hall says she again tried to reach out to the Australia embassy.

‘I begged the embassy and asked if I could take safe harbour and they said no. I said “I’m a victim of abuse” but I was just met again with lacklustre replies.’

With nowhere else to turn, Ms Hall set up a GoFundMe and reached out to the British Pakistani Christian Association.

Wilson Chowdry, the head of the organisation, answered her pleas. The organisation paid her fines and organised safe passage out of the country and back home to Australia, while criticising the Australian government for its feeble response.

‘The Australian Consulate and High Commission failed to provide any assistance and seemed not to take her plight seriously and this often placed Lara in a further set of difficult and dangerous circumstances,’ Mr Chowdry said. 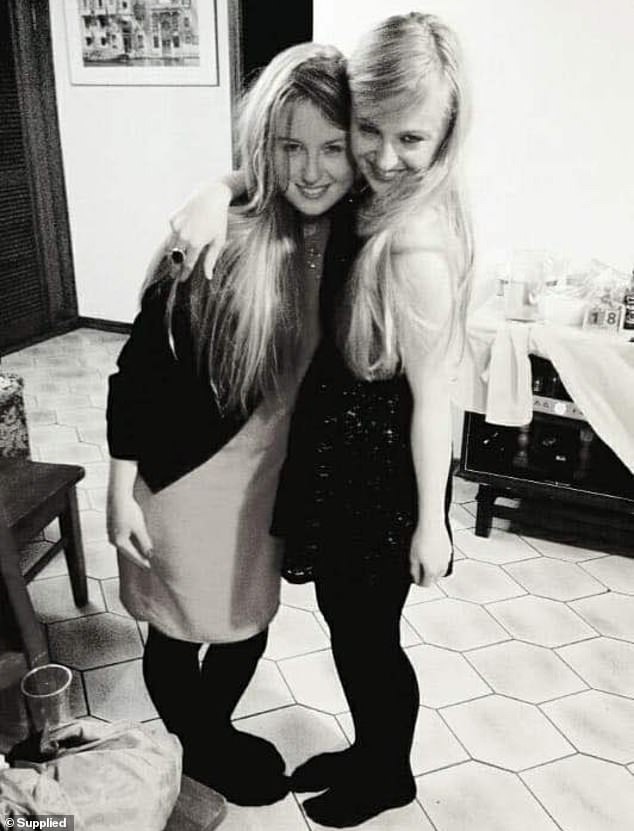 With nowhere else to turn, Ms Hall set up a GoFundMe and reached out to the British Pakistani Christian Association charity (pictured with her twin sister, Amy) 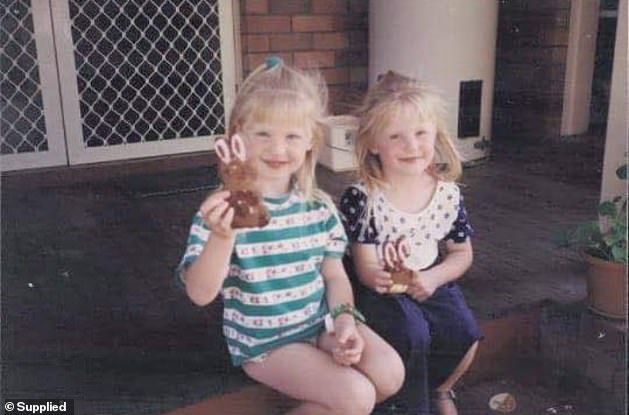 Ms Hall and her twin sister Amy, at home in Australia when they were young

‘Consular officials seem incapable of understanding her mental condition and may even have misinterpreted her OCD and assumed she was a prank caller, despite her frequent explanations and pleas. Worse still their offered advice was wholly inadequate and caused Lara grievous despair.’

Ms Hall said Mr Chowdry was the man who got her home, and was now working with the BPCA on cases similar to her own.

‘I’m not a Christian, I’m an agnostic. But Wilson helped me get out of the country. He was a big part in me getting out.’

Ms Hall was glad to have emerged from her nightmare experience in Pakistan but remained troubled by the Australian government’s relative inaction.

‘Why did the Government let me down? I’m speaking out because no other Australian should be left behind.’

Because it’s not the fucking governments fault if a stupid twit gets involved with a Paki scumbag.

One thought on “…and there are those who will not learn…”