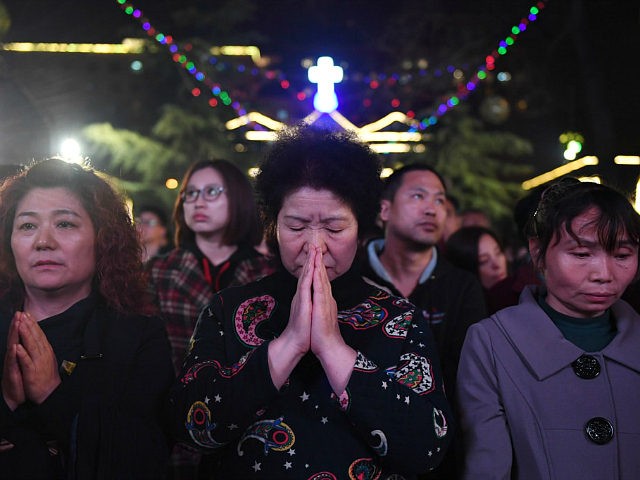 Cardinal Joseph Zen told Breitbart News in an exclusive interview that Catholics in China are suffering “huge confusion” because of the recent deal between the Vatican and the Communist Party of China (CPC), but it is not too late to rectify the situation.

“The provisional agreement between the Holy See and the Chinese government is a secret deal,” the cardinal told Breitbart News on Thursday, “and no one knows exactly what it specified.” This is a not a bad thing, Cardinal Zen said, because it allows for corrections without either party losing face.

Moreover, he said, even though the Vatican has rehabilitated a number of illicitly ordained bishops of the Catholic Patriotic Association, “they have not yet officially appointed or installed them,” and underground bishops are still in place.

Still, he said, “the communists are taking advantage of the confusion to try to force Catholics to join.”

“We need to study our history,” the cardinal said. “Why are there two Catholic communities in the first place? There was a reason. The Catholic Patriotic Association teaches against Catholic doctrine and this has not changed.”

In a forthcoming book made available to Breitbart News, titled For Love of My People I Will Not Remain Silent, Cardinal Zen proposes returning to the 2007 Letter of Pope Benedict XVI to the Church in the People’s Republic of China for guidance on how to handle Vatican-China relations.

The letter was never fully understood and implemented, the cardinal contends, which is part of the reason we find ourselves in the situation we do.

In his book, the cardinal has kind words for Pope Francis as “a man full of love” with “great compassion for the poor and the weak,” though he notes that he has “a lot of sympathy” for communists.

“The ones we fear are Pope Francis’ collaborators, infatuated with Ostpolitik,” he writes, referring to a policy of appeasement going back to the Cold War.

With regard to the Vatican’s Secretary of State, Cardinal Pietro Parolin, in fact, Cardinal Zen pulls no punches.

Initially pleased with Parolin’s appointment, Zen says he was “painfully surprised when he soon proved to be arrogant and despotic, interested more in diplomatic (worldly) success than in the triumph of the faith.”

What worries me most, Zen says of Parolin, “is his lack of respect for the truth. Intelligent as he is, the sophistry and half-truths can only be willful lies.” Parolin hid from the pope “the horrible face of Chinese Communism,” Zen asserts.

“We cannot rule out the danger of deception,” he continues. “The Chinese are masters at playing with words. The gentlemen in the Vatican are no match. Moreover, for the Communists there is no truth; truth is what is needed for the success of the party.”

Despite the assertions of some that Pope Francis’ accord with the communists, relinquishing an unspecified influence in the naming of bishops to the CPC, represents “continuity” with his predecessors, Cardinal Zen told Breitbart News that the deal is not continuity but “rupture, especially with the position of Pope Benedict XVI.”

“There may be continuity with certain Vatican bureaucrats, with Cardinal Parolin,” Zen said, “but not with Pope Benedict.”

All of this poses a great “challenge” to the faith of Chinese Catholics, Zen told Breitbart News, “but they will not turn away.”

Maybe the real solution now “is to accept that there is no solution,” Zen said.

As he wrote in his book, addressing Catholic clergy in China:

For you, a new age of the catacombs will begin. It will be winter. It will be hard on you. The government will seize your churches. The priests will no longer be able to administer the sacraments. All that will be left for you is to go home to farm the land.

“To us, a terrifying scenario is unfolding, the sellout of our Church! There is no essential freedom but a semblance of freedom,” he wrote.

One thought on “His Satanic Majesty, the Pope”