Australia: Muslim cleric warns that Allah will punish men who use urinals and getting “splash back” on clothes

Nassim Abdi is not some nut. He is teaching from standard, mainstream Islam. Islamic scholars classify this hadith as sahih, reliable.”It was narrated that Ibn ‘Abbas said: ‘The Messenger of Allah passed by two new graves, and he said: “They are being punished, but they are not being punished for anything major. One of them was heedless about preventing urine from getting on his clothes, and the other used to walk about spreading malicious gossip.”‘” (Ibn Majah 347)

This is another illustration of how Sharia inculcates fear in people: fear of Allah’s arbitrary judgment (arbitrary because Allah says in the Qur’an — 32:13 — that he could have guided everyone to the truth, but instead will fill hell with human beings and fear of hellfire keeps people in line. This can lead to jihad terrorism, because amid all the threats of eternal torture getting urine on one’s clothes or just because that’s what Allah decided, there is the Qur’an lone guarantee of Paradise — to those who “kill and are killed” for Allah (9:111). 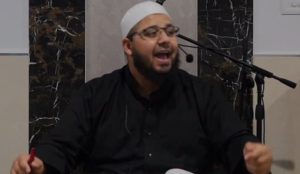 “Hardline Muslim preacher rages against public urinals and says Allah will punish Islamic men who get ‘splash back’ on their shoes,” by Stephen Johnson, Daily Mail Australia, February 4, 2019 (thanks to The Religion of Peace): via JW.

A hardline Muslim preacher has declared Allah will punish any Islamic man who uses a wall-mounted public urinal and gets ‘splash back’ on his shoes.

Nassim Abdi, from the ultra-conservative Ahlus Sunnah Wal Jammah Association, has told worshipers at a western Sydney mosque those who failed to clean themselves properly after urinating would be punished ‘in the grave’.

‘A person using them is urinating in full view of anyone, who comes and goes, with no shame in the midst of impurity,’ he said last week at the end of a 32-minute religious lesson.

‘Thus he can combine two apparent and forbidden acts in one deed, not hiding his private parts from the view of others nor cleaning himself properly after urinating.’

Mr Abdi, who has previously declared it sinful for a wife to refuse her husband’s demand for sex, said Muslims who urinated incorrectly would invalidate their prayers.

‘You’re also, when you’re urinating, you’re getting splash back,’ he said.

‘Very easy for that splashback to come to go on your pants and on your shoes.

‘It leads to your prayers not being corrected.’

‘Every public or every male public toilet now has urinals where they just stand up like animals and urinate in front of one another,’ he thundered.

‘What’s worse is we even have Muslims using these urinals.’…