“Tomorrow, God willing, we will be in paradise and they will be burning in hell…”

Now here are some questions that mainstream counterterror analysts should ponder deeply: did the Islamic State actually apply Sharia? ISIS is routinely dismissed as un-Islamic, but what exactly did they do that cannot be backed up by specific citations from the Qur’an and Hadith? And if the Islamic State just wanted to apply Sharia, and Sharia is entirely benign and compatible with Western values, as Western analysts also regularly insist, then why did the whole world regard the Islamic State as a criminal entity that must be destroyed? Why was it not welcomed into the family of nations, alongside other Sharia regimes including Saudi Arabia and Iran? 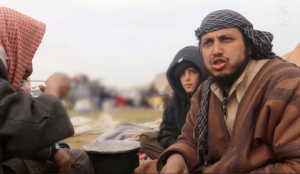 BEIRUT (Reuters) – Even as it faced imminent defeat in its last populated territory in eastern Syria, Islamic State made a new propaganda film calling on the few remaining residents of its cold, besieged encampment to maintain their prayers and seek refuge in God.

“Tomorrow, God willing, we will be in paradise and they will be burning in hell,” said an Islamic State member whom the video identified as Abu Abd al-Azeem, whose speech is peppered with Koranic recitations….

“The infidels laughed at, humiliated us in this world, but war has its ups and downs and the battle is not over,” al-Azeem said, adding that IS leader Abu Bakr al-Baghdadi is the only Muslim leader on earth today….

Azeem implores watchers not to focus on worldly conditions, suggesting those still in Baghouz were martyrs as he referenced part of the Koran that describes how a group of people were burned in a ditch because of their strong belief in God….

Al-Azeem says all IS wanted to do was apply God’s law.

“Why are we bombed by planes, why do all the nations of the unbelieving world come together to fight us? … What is our guilt? What is our crime? We (just) wanted to apply the sharia of God,” he said….

One thought on “Islamic State jihadi: “What is our guilt? What is our crime? We just wanted to apply the sharia of Allah.””