But there are already many mosques all over Burma, and you can see bearded freaks from all over the Middle East go about their shady business. The jihad in the border regions has been put down for now,  and the anti-Buddhist propaganda from the corrupt media is being exposed, little by little. 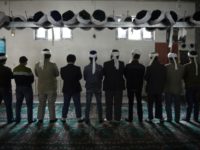 Islam is a totalitarian cult. China is authoritarian government. A match made in heaven it would seem.

ROME (Reuters) –  A Soros financed  rapefugee scam with scores of  unassimilable African savages on board appealed to European states for a safe port on Thursday after being stranded for eight days between Malta and Italy, saying the health of the rescued people was worsening.

Rome and Valletta denied the Alan Kurdi ship entry into their waters after the vessel, managed by German humanitarian organization Sea-Eye, rescued 64 migrants off the Libyan coast on April 3.

“One of the women whom we managed to retrieve from ISIS said that she was held in a cellar for three days without food or water,” Iraqi MP Vian Dakhil told Egyptian TV channel Extra News. “Afterwards, they brought her a plate of rice and meat. She ate the food because she was very hungry.”

“When she was finished they said to her: ‘We cooked your one-year-old son that we took from you, and this is what you just ate,’” she continued, wiping away the tears as she recounted the ordeal.

Yazidis, a religious minority community native to Northern Iraq, have been the victims of mass persecution at the hands of the Islamic State, who consider them devil worshippers. Last year, the United Nations determined that Islamic State crimes against Yazidis should be classified as genocide.

During the interview, Dakhil revealed further atrocities committed by the terrorist organization, such as the gang rape of girls as young as ten.

“One of the girls said that they took six of her sisters. Her younger sister, a ten-year-old girl, was raped to death in front of her father and sisters. She was ten years old,” she said. “The question that we ask ourselves is: “Why? Why did these savages do this to us?”‘

Dakhil is Iraq’s only Yazidi member of Parliament and has become a prominent voice for Yazidis and other victims of the Islamic State. She has long campaigned for greater international effort to prevent the persecution and personally participated in rescue missions to save stranded Yazidis trapped on Sinjar mountain following the Islamic State takeover of Sinjar in 2014.

Other activists and human rights advocates have corroborated the stories of atrocities committed against Yazidis in Iraq. A Yazidi activist told a Women for Women International conference in April that one survivor witnessed Islamic State terrorists cutting open a pregnant captive and consequently raping her baby before raping her as well.

In May, a report from The Times found that Islamic State had also conducted chemical weapons experiments on live human beings, described as reminiscent of Nazi Germany.

This month, the House passed a bill unanimously that seeks to improve humanitarian efforts towards Yazidis and other persecuted minorities in the Middle East.

“Tens of thousands of religious and ethnic minorities in Iraq and Syria continue to face persecution at the hands of ISIS and they need our help now,” Rep. Anna Eshoo (D-CA) said in announcing the bill’s passage. “H.R. 390 will provide urgently needed humanitarian relief to the survivors of what both the Congress and the State Department have labeled as ‘genocide’ and ensure we hold the perpetrators of these crimes accountable.”