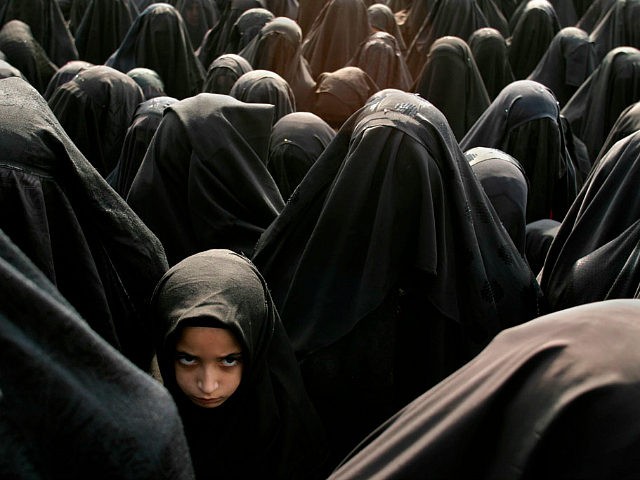 Sri Lanka may be considering joining a growing number of governments in banning the burqa, an Islamic head covering that leaves no part of a woman’s body visible, local media reported Tuesday in the aftermath of the series of suspected jihadist bombings targeting Christians on Easter Sunday.

Officials confirmed Tuesday that the death toll had risen a second time from 290 to 321 as some severely wounded died overnight and forensic specialists began identifying the dismembered remains strewn throughout three churches and three hotels in and around the nation’s capital, Colombo.

Could Not Have Succeeded’ Without ’International Network’

Sri Lanka’s Daily Mirror cited “a highly placed government source” Tuesday indicating that President Maithripala Sirisena has begun discussing a nationwide prohibition on the Islamic clothing item after police found several women suspected of having aided the Easter terror attacks were wearing burqas, making finding and arresting them more difficult. The use of the burqa may further hinder operations to arrest individuals believed to be involved in the attacks, the source further indicated.

“The government, [the source] said, is planning to implement the move in consultation with the mosque authorities and yesterday several ministers had spoken to President Maithripala Sirisena on the matter,” the Mirror alleged, adding that the burqa and its close relative, the niqab, were “never part of the traditional attire of Muslim women in Sri Lanka until the gulf war in the early 1990s which saw extremist elements introducing the garb to Muslim women.”

The niqab, unlike the burqa, leaves the wearer’s eyes visible, but nothing else. The burqauses a semi-transparent cloth over the eyes to allow the wearing to see but others not to be able to see into the garment.

Both coverings tend to be far less common in the Muslim world than the hijab, a headscarf that hides a woman’s hair but leaves her face exposed. The Quran requires both men and women to dress modestly, but does not specifically require Muslims to wear any of these items.

If Sri Lanka adopts such a measure, it would join a diverse coalition of nations in Asia, Africa, and Europe that have done so in the interest of preventing terrorists from using the burqa to evade police or hide explosives. Among the nations that have enacted a ban on the item are Chad, Cameroon, Gabon, Morocco, Austria, Bulgaria, Denmark, France, Belgium, and Muslim-majority western China.

Sirisena declared a state of emergency after six bombings Sunday now believed to have killed 321 people and injured over 500. Reports revealed the president “gave the military a wider berth to detain and arrest suspects,” resulting in 40 arrests at press time. As the bombing culprits are believed to be suicide bombers, those arrested are alleged members of the jihadist terror ring that helped the individuals organize the attacks.

Police fear that the six bombings Sunday did not represent the entirety of the jihadist plot. On Monday, authorities found explosives and detonators in at least two other locations – a bus stop in Colombo and a van parked near the targeted St. Anthony’s Church – believed to belong to the same individuals responsible for the attacks.

Police initially stated that all those arrested were Sri Lankan nationals and believed to be members of local terrorist group National Thowheeth Jama’ath. On Tuesday, however, India’s Hindustan Times revealed that one of the 40 arrested was a Syrian citizen. The newspaper did not offer any more details on the individual.

The Islamic State has claimed responsibility for the attacks, but not offered any proof of its involvement or identified the individuals responsible. The terrorist group, who recently lost all territory belonging to the “caliphate” it established in 2014, routinely take credit for jihadist acts around the world to boost its credibility in radical Islamic circles.

In addition to pressure to find and punish those responsible, Sirisena is facing mounting criticism after Indian media revealed – and rival politicians in the government confirmed– that Sri Lankan intelligence officials received international warnings that jihadists would strike its Christian minority on Easter. Prime Minister Ranil Wickremesinghe, who Sirisena tried to unconstitutionally remove from office in October, told reporters Sirisena banned him and his cabinet members from attending intelligence meetings, so no one tied to Wickremesinghe was aware of the warning.

Mahinda Rajapaksa, the former president Sirisena tried to replace Wickremesinghe with, joined the prime minister in condemning Sirisena and demanding answers on the Easter warnings on Tuesday.

“The government can’t shy away from taking the responsibility. It knew about the attacks, but did not warn anyone or any church and made sure that none of the ministers or MPs attended any service,” he said in an extensive statement to parliament.

Rajapaksa is both renowned and criticized for being the president during the end of Sri Lanka’s civil war in 2009. Critics argue that he used outsized force to subdue and kill the Tamil separatist movement that had launched the war in 1983.

“Intelligence never indicated that it’s going to be an attack of this magnitude. They were talking about isolated incidents,” he told reporters. “Besides, there is no emergency in this country. We cannot request the armed forces to come and assist as [sic], we can only depend on the police.”