Boy, the language of these ‘officials’ is creeping me out. But even in this hour of crisis neither he nor other authorities worldwide will dare to identify exactly what kind of “religious extremists” were involved, even though Indian media has already identified two of them by name: Zahran Hashim and Abu Mohammad.

The jihad advances with impunity, and the powers of the world cower before it, portray Muslims as the true victims, and kowtow to its enablers and allies. 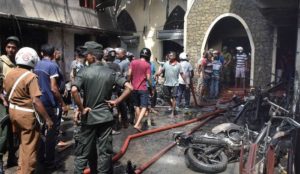 Seven suspects have been arrested over the Easter Sunday terror bombings at churches and luxury hotels in Sri Lanka, that killed at least 190 people and wounded hundreds more.

Eight blasts, thought to have been targeting worshippers and tourists, were reported across the country today, in the worst bout of violence in Sri Lanka since the South Asian country’s bloody civil war ended a decade ago. The death toll is expected to rise.

The government has imposed an island-wide curfew and a social media shutdown.

Earlier, the defense minister blamed religious extremists for what he called the “unfortunate terrorist incident”.

He said those “involved in this unfortunate terrorist incident will be taken into custody as soon as possible.”

St. Anthony’s Shrine and the hotels, Shangri-La, Kingsbury and the Cinnamon Grand, are in Colombo, the capital, and are frequented by foreign tourists.

The other blasts were at St. Sebastian’s Church in Negombo, a majority Catholic town north of Colombo, and at Zion Church in the eastern town of Batticaloa….