Lovers of regulation, supporters of same-sex couples and very liberal when it comes to abortion – this is how a sample of a thousand Australians perceive themselves.

Australia is a country that accepts gay couples, hates the big banks, considers second-generation migrants “Australian”, but the majority feel negatively towards Islam.

New wide-ranging data released by YouGov has revealed fascinating insights into the Australian identity, its place in the world, and its many contradictions.

Australians were the second-highest out of 23 countries surveyed in not considering where someone’s parents come from as relevant to identifying as Australian, but in our personal lives, 47% admitted to having “very few” or no close friends of a different ethnic background. And 80% of us believe women still suffer discrimination, but a third also think the women’s rights movement has gone too far. 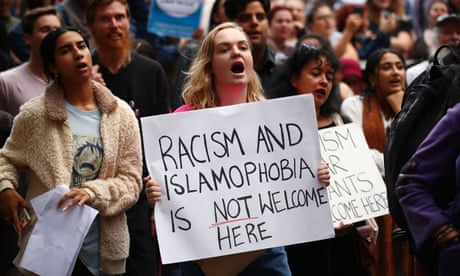 Almost half of Australians believe immigration should be reduced, poll finds

Older Australians, perhaps surprisingly, are just as supportive of gender equality as their younger counterparts. In some cases, more so. But generational fault lines opened up over same-sex relationships (those under 45 vs over 45) and the acceptance of transgender Australians (under 35 and over 35).

This is most certainly bullshit.