“Trump Is Droning Jihadis in Somalia ‘to Death’” 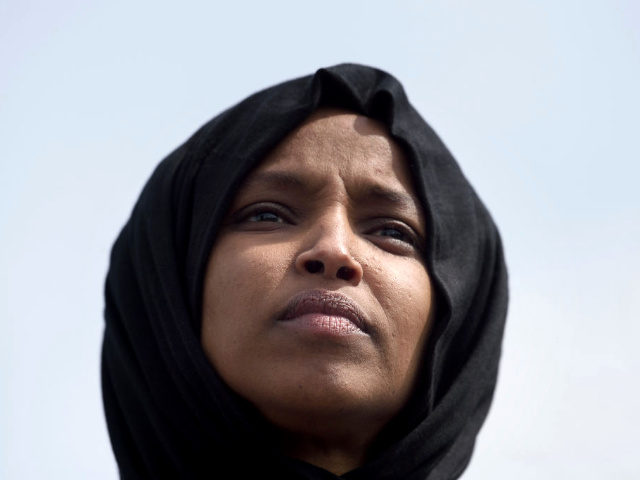 OMG! Here comes another one of these “my people” moments:

WASHINGTON, DC — Rep. Ilhan Omar (D-MN), during a House panel hearing on Thursday, complained that U.S. President Donald Trump has dramatically intensified American airstrikes in her native Somalia that have killed hundreds of members of the al-Qaeda affiliate al-Shabaab.

Describing herself as “an African on this committee,” she suggested that the Trump administration should “reassess” the way it deals with al-Shabaab and other jihadis in Somalia.

Her comments came during a hearing by the House Foreign Affairs Committee.

I just wanted to really get into this horrific reign of terror and its spread in Africa, and we oftentimes are really dealing with this issue, and it seems that we are attempting to drone it to death. … In Somalia, particularly in dealing with al-Shabaab, since President Trump has gotten elected, the number of drones have increased, but the number of attacks al-Shabaab has been able to carry out has also tripled. We also know the same to be true for Boko Haram.

On the African continent, the United States military only carries out direct airstrikes in Libya and Somalia. The U.S. does not directly target the Nigeria-based Boko Haram group, but it does support local efforts against the jihadis.

“There is sort of a direct correlation between our droning, and the increase of their [jihadis] assaults. And their recruitment seems to increase because of some of the civilian casualties that take place,” Omar stressed.

Breitbart News was unable to verify Omar’s assertion that the U.S. air campaign has led to an increase in terrorist attacks and recruitment.

Citing Pentagon data, the Long War Journal reported in March that U.S. airstrikes against al-Shabaab, not attacks by the group as Omar indicated, are “on pace to nearly triple last year’s record number of airstrikes” dropped on the group.

Michelle Lenihan, the acting deputy assistant secretary of defense for African Affairs at the U.S. Department of Defense (DOD) who testified during the hearing, told Omar that drone strikes are just a “minor component” of America’s approach to bringing stability to Somalia.

In November 2018, the Mogadishu-based Hiraal Institute argued that the increase in U.S. airstrikes forced al-Shabaab to change its tactics and resulted in “fewer” attacks in Somalia.

At the time, the Institute did acknowledge that the terrorist group was adapting to the “increasingly lethal air campaign.”

Residents of the Somali capital of Mogadishu did experience a wave of deadly suicide and car bomb attacks at the hands of al-Shabaab in March.

Omar claimed that comments attributed to Trump by Democrat anonymous sources and rebuked by the president make it difficult for African countries to partner with the United States.

All of you talked about the partnership that needs to happen in order for us to have greater influence in Africa, and I would be remiss if I didn’t say that, as an African on this committee, when you have a president who uses language like ‘shit hole countries,’ it makes it really hard for people in Africa to sort of think of themselves as being partners with the United States, and so I hope that we are in the business of developing better relations.

Omar is a naturalized U.S. citizen from Somalia who entered the United States as a refugee.

Marking a significant departure from the previous administration, Trump has intensified the U.S. military’s air campaign against al-Shabaab, killing at least 200 jihadis this year alone.

Last year, U.S. airstrikes in Somalia resulted in the “third record high” annual death toll (326) of al-Shabaab jihadis, the New York Times learned from the Pentagon. This year, al-Shabaab fatalities are on track to eclipse those from 2018.

During the hearing on Thursday, Rep. Andy Levin (D-MI) pointed out:

The U.S. has dramatically increased airstrikes to counter al-Shabaab in Somalia since April of 2017. We carried out more airstrikes in Somalia in the last nine months of 2017 than in the five years from 2012 to 2016. Then there were 47 in 2018 and almost 30 just in the first quarter of 2019.

Islamic State (ISIS/ISIL) jihadis have established a growing presence in Somalia, but its rival al-Shabaab remains the most potent group in the region.

Late last year, the Institute for Economics and Peace’s (IEP) Global Terrorism Index (GTI) revealed that Africa is home to half of the top ten countries with the highest increase in the number of terror-linked fatalities from 2016 to 2017 — Somalia, Egypt, Central African Republic, Mali, and Kenya.

“The country with the largest total increase in terrorism compared to the prior year was Somalia where the number of deaths rose by 708, a 93 percent increase,” the GTI revealed.

“Since al-Shabaab’s first external attack in 2010, the group has killed hundreds through external operations, with the most lethal attacks occurring in Kenya and Uganda,” Gen. Thomas Waldhauser, one of the top commanders in Africa, told lawmakers earlier this year.

Ilhan Omar, like Rashida Tlaib and all stealth demographic jihadists, i.e., enemy Muslim invaders and conquerors, are only here in America because a “uniparty” of open borders globalist lunatics have circumvented America’s two-party political system and hijacked and co-opted America’s federal government.

In fact, if our federal government wasn’t completely hijacked and co-opted by a “uniparty” of open-borders globalist lunatics, the horrible evil scourge of Islam would already be outlawed in America and mass Muslim migration with all of its excess baggage, which is really stealth demographic jihad to invade and infiltrate non-Muslim unbeliever societies in mass, would already be banned and reversed.

As stealth demographic jihadists, i.e., enemy Muslim invaders and conquerors, are invading and infiltrating America not only to rape, mass-murder, and maim innocent non-Muslim unbelievers on occasion to Islamize our society, but to also breed like rabbits, sabotage, subvert, undermine, destabilize, and slowly conquer America from within for the long-term strategic purpose of eventual stealth demographic conquest.

And again, it’s all happening because America’s former two-party political system has been circumvented and America’s federal government has been hijacked and co-opted by a “uniparty” of open-borders globalist lunatics who foolishly insist, with absolutely no legitimate evidence whatsoever, that the horrible evil scourge of Islam is somehow a so-called Religion of Peace.

Which is nothing but pure unadulterated garbage and the extremely fantasy-based glue that universally binds together all utterly unhinged open-borders globalist lunatics the world over.

One thought on “Ilhan Omar complains…”