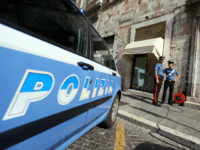 MILAN (AP) – Italy’s interior minister says an immigrant from North Africa has been arrested for an arson fire at a police station in northern Italy that killed two and injured more than a dozen.

Typical for AP to call an illegal alien an “immigrant”.

Matteo Salvini announced the arrest on Twitter Tuesday, adding that “eliminating illegal immigration to Italy and Europe is a moral duty: Everyone home.” Merkel Bashes “Populists”, Calls for ‘Pro-Minority’ Europe of ‘Values’ Ahead of Elections

Any “populist” today is worth more than  a thousand traitors like Angela “Erika” Merkel, a former Stasi  operative.

Populists are the “enemy” of Europe and seek to destroy the continent’s globalist “values”, Angela Merkel has warned ahead of European Parliament elections this week.

The continent never had Merkel’s “globalist values”. Merkel is the enemy of Europeans and a destroyer of 2000 years of culture & civilisation.

Speaking in Zagreb at the weekend, the German Chancellor urged Croatians and other voters in Europe to shun pro-sovereignty, anti-mass migration political forces at the ballot boxes this week.

Patriotism and support for a federal European superstate in which national sovereignty has been transferred to Brussels are “not opposites”, said the chancellor, insisting: “Our values mean we can be proud of our own country and at the same time work to build Europe.

Nationalism is the enemy of the European “project” she says…
Right, it’s a project of the globalists.

“There are populist currents that in many areas disdain these values, that want to destroy our European values,” said Merkel, pointing to fundamental human rights and the protection of minorities as examples of these.

“Nationalism is the enemy of the European project, and we have to make that clear in the last days before the election,” she added, stressing that Europe is a “project of peace”, a “project of freedom” and “the project of prosperity”.

There is civil war in France, freedom of speech is all but gone and so is prosperity. Merkel squandered the wealth accumulated over three and a half post-war generations.

No such thing. They are all left and far-left.

On Saturday, Weber echoed Merkel’s message as he ruled out any cooperation with populists following this week’s vote, telling Croatian media: “Right-wing populists and extremists are those who want to destroy Europe, who are not believing any more in partnership on this continent and we will fight against them.”

We’re all against the EUSSR that seeks to replace the natives with a Mohammedan proletariat.

At the same time as Merkel addressed a basketball court in Zagreb, patriotic, pro-national sovereignty parties met for a rally in Milan, where Italian deputy prime minister Matteo Salvini hit back at Brussels-backing establishment politicians.

“There is no far-right here, there is just politics of common sense,” he told crowds at the Piazza del Duomo, proclaiming that “The extremists are those who governed Europe for 20 years in the name of precariousness and poverty.”

Describing “the Europe of nations and people of which De Gasperi, De Gaulle, and Margaret Thatcher talked about” as “one of the most beautiful dreams”, the populist League minister called out globalist figures including Merkel, French leader Emmanuel Macron, and billionaire George Soros as “traitors” working to betray this vision “in the name of finance, of multinationalism, of money and uncontrolled immigration”.

7 thoughts on “Merkel Bashes “Populists”, Calls for ‘Pro-Minority’ Europe of ‘Values’ Ahead of Elections”