In a report commissioned by the Government, Sir Eric Pickles, the former Conservative Cabinet minister, today warns that the authorities are in a “state of denial” and are “turning a blind eye” to election fraud.

He said that there is evidence of voter fraud “especially in communities of Pakistani and Bangladeshi background” but that the cases have been ignored because of “over-sensitivities about ethnicity and religion”.

Sir Eric warns that “challenging issues” over community cohesion should never be an “excuse” for failing to “uphold the rule of law and protect British liberties”. The invasion by unassimilable savages will inevitably result in the annihilation & replacement of the native infidels.

The Mullahs Promise “Demise of Israel” and American Civilization

“Beat them lightly, it’s in the Koran” 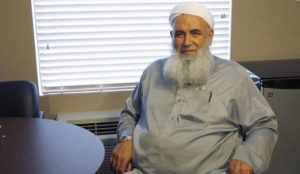 “Observe how peaceful we are,” Imam Mahmoud Shalash urged. “We do not cause any harm to anybody.”

“Observe how peaceful we are,” Imam Mahmoud Shalash urged. “We do not cause any harm to anybody.”

Shalash’s mosque, the Islamic Center of Lexington, had contacted Lexington cops and Homeland Security, while claiming to be suffering from Islamophobic threats.

Before long, two cop cars in the Kentucky city known as the Horse Capital of the World were parked outside the mosque to protect the imam and his congregation.

The FBI also got on board.

CAIR widely circulated reports of the threat to what it called, a “house of worship”.

“Our nation’s leaders must send a clear message challenging the rising Islamophobia that leads to such threats,” CAIR’s Ibrahim Hooper declared. With the 2016 election still imminent, his news release blamed the “extreme anti-Muslim rhetoric” of Donald Trump and Ben Carson.

Four years later, Imam Mahmoud Shalash is in jail. The imam of the Islamic Center, along with John Sadiqullah, and Abdul Hadi, were charged in a harmful and not especially peaceful murder plot.

What makes this particular murder plot interesting is that it would have been authorized with a fatwa.

Imam Shalash has worn many hats. According to a LinkedIn profile, In addition to running the Islamic Center of Lexington, a man of that name owned a mobile home park and the Bluegrass Extended Stay motel (guest reviews have complained about roaches, stained beds and unfriendliness to service dogs), was a member of the Muslim Students Association (a terror linked Muslim Brotherhood hate group) while working on a degree in electrical engineering at the University of Chicago, and, ironically, considering his current predicament, had worked as a chaplain at “fedral and state prisons”.

It’s unknown which, if any of these businesses, led to the first plot.

In March, Imam Shalash met up with a government informant at the Days Motel which records indicate is owned by Shalash. (Reviews of the motel describe a man named Mohammed, accuse the staff of sexual harassment, and claim that the motel is dangerous and that the mattresses are covered in bugs.)

There the imam told the informant he needed help getting $80,000 from his target. “Do whatever you have to do to get my money back.” That, according to the informant, included breaking the man’s legs.

At a second meeting, Imam Shalash was there along with Sadiqullah, for a murder plot against another man, this time apparently involving a taxi company deal gone bad, across state lines.

A meeting was then meant to happen at a mosque at which a fatwa would be provided authorizing the murder. That mosque may have been the Islamic Center of Lexington, which is just across the street from the University of Kentucky.

A fatwa, a religious Islamic authorization, for murder would have provided a sharia license for violence.

“This is the month when the heart gets soft,” Imam Shalash had claimed during a previous Ramadan. “You read the Quran more often, you remember Allah more often, you tend to come to the mosque more often to pray in congregation.”

This Ramadan didn’t seem to have softened his heart. But Imam Shalash has never been a kind man.

“This is America,” Nomani had protested. “How can you tell men to beat their wives?”

“They should beat them lightly,” Imam Shalash had insisted. “It’s in the Koran.”

And yet, despite incidents like this, the media continued quoting Imam Shalash favorably.

When Sonny Landham called for a Muslim ban while running for a Senate seat in Kentucky, the media turned to Imam Shalash to describe the libertarian actor’s comments as “irresponsible”.

The media constantly turned to Imam Shalash because he’s a major figure in the Muslim settler community in Lexington. Documents list him as an incorporator of the Islamic Society of Central Kentucky. The Society’s site lists him as conducting marriages and funerals. And the Society founded the Lexington Universal Academy whose board appears to contain a number of people with that last name.

That includes one woman described as a CAIR board member and anti-Israel activist who shares a name with a woman who is listed as living at the same address as Imam Shalash.

The Islamic Center of Lexington responded to Imam Shalash’s arrest with a statement claiming that its leadership is “shocked” at the news, that “every American citizen is innocent until proven guilty”, and that “Islam is a religion built on peace and tolerance”. But how shocked can the Center really be?

News accounts report that Imam Shalash had already pleaded guilty to federal charges of $238,763 in illegal currency transactions back in 2012. Despite that, the Center didn’t cut ties with him.

It didn’t cut ties with him after the wife-beating story.

The Islamic Center is probably hoping once again that this latest Shalash scandal will blow over.

The media has been the Islamic Center’s greatest ally during its previous scandals. When neighbors protested the plans for an Islamic community center, the media took Shalash’s side. Had the media disclosed Shalash’s previous guilty plea and the wife-beating incident, the stories and the hearings might have had a very different outcome.

Instead the media waited for a murder. And nearly got one.

Imam Shalash has spent the better part of two decades trading in vague concerns about Islamophobia while preaching that Islam is a religion of peace.

When Obama ran for office, Imam Shalash claimed that his opponents were “trying to exploit the anti-Islamic sentiment in this country that ties Muslims with terrorists.”

After President Trump’s travel ban, Imam Shalash had insisted, “People come for better opportunities to this country, not to do terroristic actions.” Apparently the two are not mutually exclusive.

This case isn’t about Islamic terrorism. But it is about how Islamic law can be leveraged for violent purposes. Islamic violence isn’t just terrorism. It’s violence that is licensed by Islamic authorities.

And that can be as simple as a meeting in a grimy motel or a mosque opposite the University of Kentucky where the religious authority is just a thug who wants to get his money any way he can.

“We want to come up here and show them the real Islam that carries the love and courtesy and tolerance in our faith,” Imam Shalash was quoted as saying in news stories.

It took a while, but he finally did.