If he succeeds with this we have truly been turked.

Islamophobia” is an insult to the intelligence of every kuffar. It suggests that the overwhelming majority of infidels that reject Islam suffers from an irrational mental condition that can only be cured by whacking them into submission.

This is vile & contemptible. #Trump needs to tell the sultan of Turkey to get stuffed. 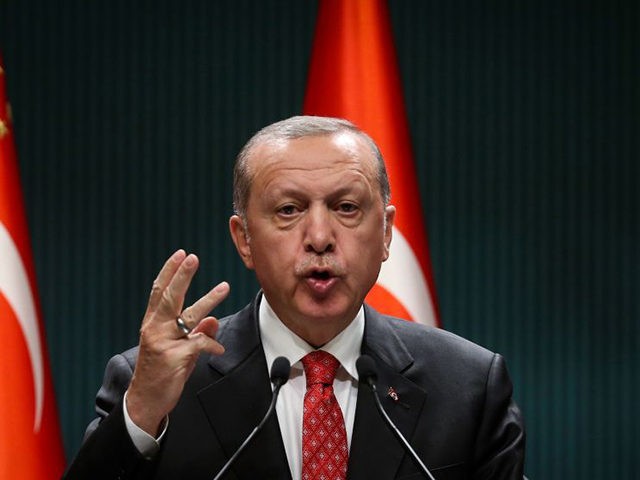 Islamist Turkish President Recep Tayyip Erdogan urged the United Nations to establish “International Solidarity Day Against Islamophobia” during his speech at the General Assembly on Tuesday, claiming Muslims are the most vulnerable population to “racism, xenophobia, Islamophobia, and hate speech.”

Erdogan did not mention the world’s largest systematic human rights atrocity against Muslims — the imprisoning of between 1 to 3 million Muslims in concentration camps in China — during his remarks. Prior to joining dictator Xi Jinping’s lucrative “Belt and Road Initiative,” a Chinese global infrastructure program, Erdogan had referred to the treatment of Muslims in China as “genocide,” but has not similarly condemned China for its abuses in a decade.

The absence of mention of the situation in Xinjiang, China’s westernmost province, was especially notable given that the Muslim population of Xinjiang is largely Turkic — Uyghurs, Kazakhs, and Kyrgyz people — and that Erdogan spoke immediately before Xi. Erdogan spoke after President Donald Trump and Brazilian President Jair Bolsonaro, who urged the world to unite against “Christophobia.”

This year marks the 75th anniversary of the establishment of the United Nations. In addition to the hallmark anniversary, the General Assembly is functioning slightly differently this year due to travel restrictions and social distancing guidelines to contain the Chinese coronavirus. World leaders stayed in their home countries and addressed the chamber in New York virtually.

“Racism, xenophobia, Islamophobia and hate speech have reached an alarming level. In the course of the [Chinese coronavirus] pandemic, acts of violence against vulnerable people, especially migrants and asylum-seekers, accelerated while xenophobia and racism increased,” Erdogan claimed. “Muslims are the most exposed to these dangerous tendencies fueled by prejudice and ignorance.”

Erdogan, himself an Islamist populist politician, blamed “politicians who turn to populist rhetoric for the sake of votes” for this alleged rise in hate speech. He warned against groups who, he said “legitimize hate speech by abusing the freedom of expression.”

Under Erdogan, the Committee to Protect Journalists (CPJ) ranked Turkey the world’s number one jailer of journalists for three years in a row, 2016 to 2018. Xi’s China took the top spot from Turkey in 2019.

To fight this alleged racism and hate speech, Erdogan told the General Assembly that the United Nations should establish March 15 as the “International Solidarity Day Against Islamophobia.” March 15 is the anniversary of the 2019 mosque shootings in Christchurch, New Zealand.

“I reiterate my call for March 15, the day of the terrorist attack perpetrated in New Zealand against Muslims, to be declared by the United Nations as ‘International Solidarity Day Against Islamophobia,’” Erdogan said. “As the second largest international organization after the United Nations, the Organization of Islamic Cooperation [OIC] has officially recognized this day.”

Erdogan also used the occasion of his address to condemn the United Nations itself for the structure of the Security Council, its most powerful body. The Turkish president has for years spearheaded a campaign against having five permanent members of the council — the U.K., America, France, China, and Russia — and called for a more flexible approach to membership.

“We have seen how ineffective the existing global mechanisms have been during this crisis. This was so much true that it took weeks, even months, for the Security Council, the most fundamental decision-making body of the United Nations, to include the pandemic on its agenda,” Erdogan noted.

“We must rapidly implement comprehensive and meaningful reforms, starting with the restructuring of the Security Council. We must provide the Council with a more effective, democratic, transparent and accountable structure and functioning,” Erdogan demanded. “The fate of humanity cannot be left at the mercy of a limited number of countries.”

Erdogan also had harsh words for the growing number of nations seeking peace with Israel. While he did not name them — the most recent nations to formalize diplomatic with Israel are Turkey’s neighbors Bahrain and the United Arab Emirates (UAE) — Erdogan called any move in the region less than the establishment of a Palestinian state “vain, one-sided, and unjust.”

“The order of occupation and oppression in Palestine, which is the bleeding wound of humanity, continues to hurt consciences. The dirty hand that reaches the privacy of Jerusalem, where the sacred places of the three great religions coexist, is constantly increasing its audacity,” Erdogan said. “Turkey will not support any plan that the Palestinian people do not give consent to.”

“Participation of some countries of the region in this game does not mean anything beyond serving Israel’s efforts to erode basic international parameters,” he continued. “Countries that have declared their intention to open embassies in Jerusalem, in violation of the United Nations resolutions and international law, only serve to make the conflict more complicated with their actions.”

Erdogan also touched on other disputes Turkey is embroiled in: Ankara’s increasingly aggressive presence in the Mediterranean and its invasions of Syria, Libya, and Iraq. On the former, Erdogan placed the blame of all disagreement with the “uncompromising, unjust and spoiled approach of the Greek Cypriot side,” leaving no room for concession.

On Syria, Erdogan urged the United Nations to more aggressively intervene. While allied with Russia, Erdogan has been a fervent opponent of Syrian dictator and close Russian ally Bashar al-Assad. Assad and Erdogan have both referred to each other as “terrorists.”

Erdogan also applauded himself for his invasion of Libya this year, which tipped the scales against Russia-backed warlord Khalifa Haftar to help the U.N.-backed government of Libya maintain control of the nation’s capital, Tripoli.