Corrupt UN agencies, China & a bunch of dodgy, mostly Soros funded NGO’s are trying to terrorise Australia into coughing up billions for the climate racket. None of them should be given the light of day. They should be barred from entering Australia. They should not be given airtime in the media.

Fury in Canberra as UNESCO advises world’s biggest reef be moved to list of world heritage sites ‘in danger’ because of climate change.

An expert group of the United Nations wankers has recommended that Australia’s Great Barrier Reef be added to the list of World Heritage sites that are “in danger” when it meets next month, prompting a furious response from the government.

The committee of the United Nations Educational, Scientific and Cultural Organization (UNESCO) said the world’s most extensive coral reef system should be added to the list because of the impact of climate change. 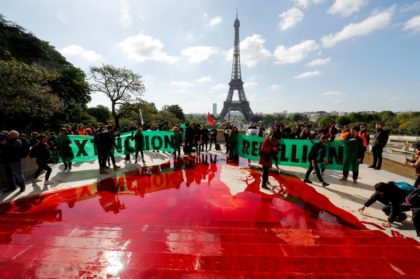 Australia has been battling for years to keep the Great Barrier Reef, which lies off its northeastern coast and is a major tourist attraction, off the list, which can lead to the eventual loss of World Heritage status.

Richard Leck, head of oceans at WWF Australia, said the committee’s recommendation was a “powerful message that the government needs to lift its game on climate change.”

Minister for the Environment Sussan Ley said Canberra’s conservative government had been assured there would be no recommendation on the reef by the UN before July.

“Politics have subverted a proper process and for the World Heritage Committee to not even foreshadow this listing is, I think, appalling,” she told reporters in Canberra.

The UN body did not consider the billions of dollars spent attempting to protect the world’s largest coral reef, she added.

“This decision was flawed. Clearly, there were politics behind it,” she said.

Ley did not elaborate, but a government source told Reuters news agency that Australia believed China to be responsible amid a souring of relations between the two countries. Chinese officials are influential on three committees, while a Chinese lawmaker is chairman of the World Heritage Committee, the source said.

“We will appeal but China is in control, the meeting is in China, we don’t have much hope,” the source said, declining to be named as he is not authorised to speak to the media.

The recommendation will be discussed at the agency’s virtual meeting in Fuzhou next month, with experts also debating whether sites including Nepal’s Kathmandu Valley and the cities of Venice and Budapest should be added to the “in danger” list.

“The UNESCO warning could not be any clearer, the Great Barrier Reef is in danger because of the Morrison Government’s failure to act on climate change,” Martin Zavan, spokesperson for Greenpeace Australia Pacific said in a statement, referring to Prime Minister Scott Morrison. “The Morrison Government needs to take its role as an environmental custodian seriously and cut emissions by 75 percent this decade to give the Reef a fighting chance.”

UNESCO has been pushing to put the reef on the danger list for a number of years, noting the worrying outlook as early as 2015.

While acknowledging Australia’s efforts to improve reef quality and the financial commitments made, it noted “with the utmost concern and regret… that the long-term outlook for the ecosystem of the property has further deteriorated from poor to very poor.”

A study published in the Proceedings of the Royal Society Journal last October found half the reef’s corals had died over the past 25 years.

The International Union for the Conservation of Nature, meanwhile, said in a December report that the health of the Great Barrier Reef was in a critical state and deteriorating as a result of climate change.

Coral bleaching occurred in 2016, 2017 and 2020, which also affected the reef’s animal, bird and marine population, it said. Bleaching takes place when hotter water destroys the algae on which the coral feeds, causing it to turn white.

Australia’s heavy reliance on coal-fired power makes it one of the world’s largest carbon emitters per capita, but its conservative government has resisted calls to commit to a target of net-zero carbon emissions by 2050.

Morrison has said only that the country hoped to reach carbon neutral “as soon as possible” it has backed and has continued to support the country’s fossil fuel industries, arguing tougher action on emissions would cost jobs.