Craig Kelly Says Vaccine Program Must Be Halted: “Informed Consent Is Not Occurring”

“…the vaccine may not work, but it should be safe.”

Independent MP Craig Kelly has said the entire vaccination rollout program must be suspended, as “informed consent is not occurring” in Australia.

In a Twitter post on Saturday, the member for Hughes said his previous view was that the vaccine should not be mandatory, but be freely available for Australians who have been provided with a sufficient understanding of the vaccine for their consent to be regarded as “informed.”

After reviewing “new data” and speaking with medical professionals, Kelly said his mind has changed on that matter, claiming that with a “mass brainwashing” of the public, Australians are accepting the vaccine without enough information about safety.

Man arrested and fined $5k for drinking coffee without mask

“My previous view was [vaccines] should be freely available to all (with informed consent) but mandatory to none,” Kelly said. “But on new data and speaking with doctors, I’ve changed my mind, including that with mass brainwashing ‘informed consent’ is not occurring.

Adding, “The entire [vaccine] program must be halted.”

Kelly went on to share a video clip of Dr Peter A McCullough warning that Americans are being kept in the dark when it comes to vaccine safety.

“With these vaccines none of these things are rare,” Dr McCullough said. “In fact, they are far too common and it’s worrisome…

He continued: “With all the vaccines combined 500-million shots a year, 70 vaccines, we get about 150-60 deaths that roll in, not related in time to the vaccine over the course of a year. COVID-19, we’re at 6,100 deaths, 44% occur in the 48 hours after the shot, and we started to see the mortality diverge from expected on January 22, and there’s been no safety report from the FDA or NIH, or nothing on the media.”

Dr McCullough went on to say Americans should be “alarmed” that there has been no press briefing on vaccine safety. Adding, “the vaccine may not work, but it should be safe.” 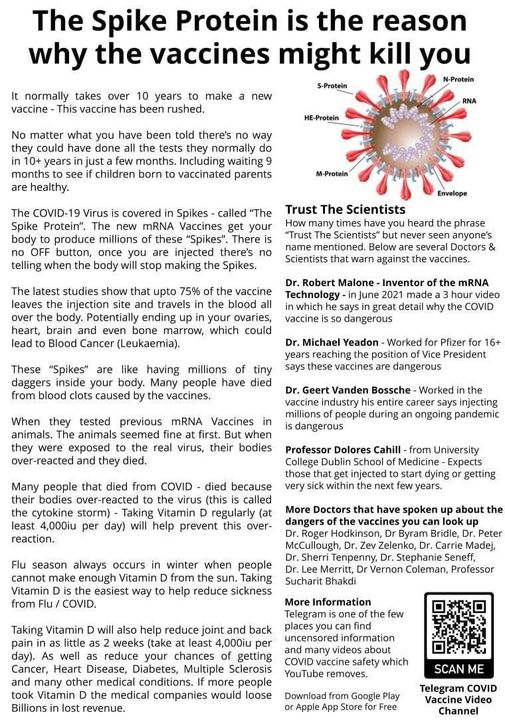