What a disgrace! The military against the people! WTF happened to this country?
These government clowns are overwhelmed by the worst decision making, policy failure by the Premier & PM. When has Australia ever used the military in a major city and not for disaster logistical reasons against civilians? 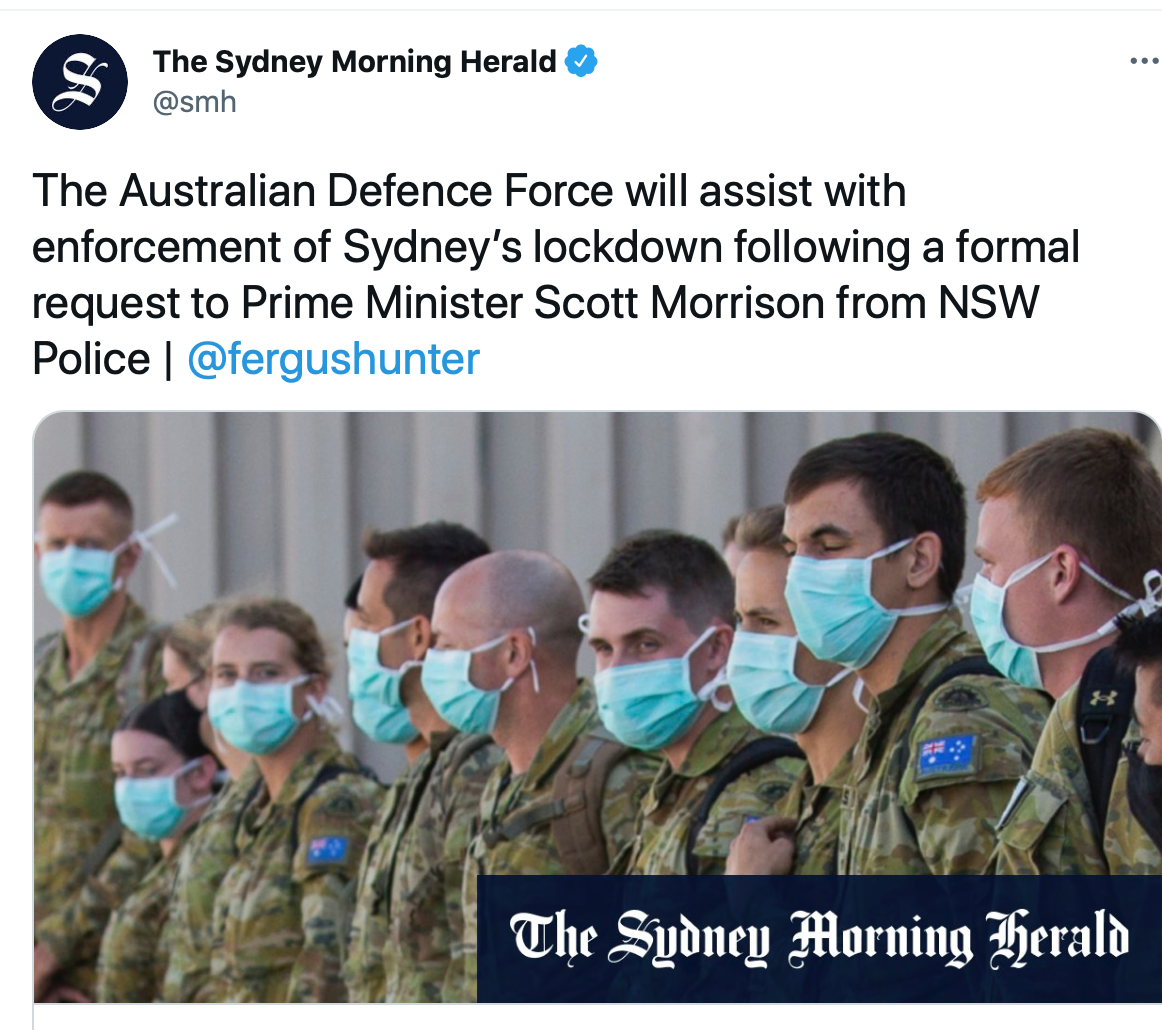 Honesty, not abuse, only way to calm protesters 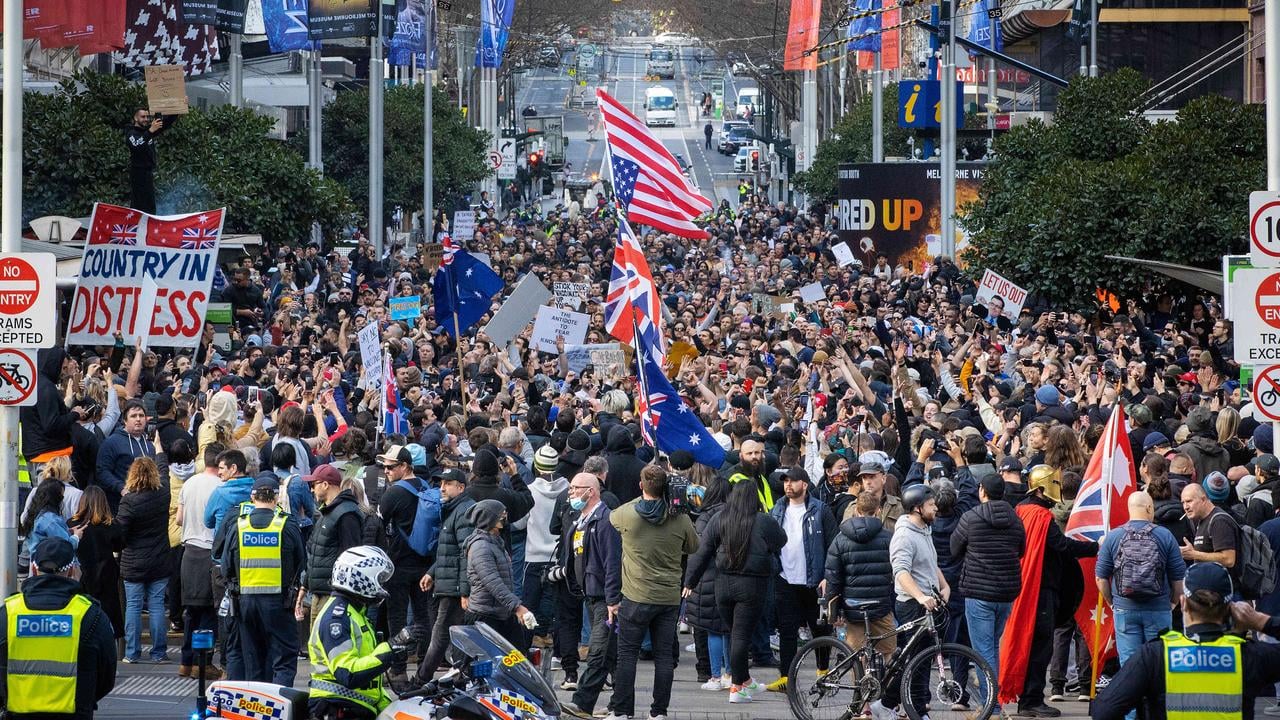 Such arrogance. To Victorian Health Minister Martin Foley, the 10,000 anti-lockdown protesters last Saturday were just lowlifes who were “on the side of the virus” and indulging in “ratbaggery”. To NSW Police Minister David Elliott, they were “a whole lot of halfwits” and “boofheads”. To Luke Cornelius, a deputy commissioner of Victoria Police, they were “selfish people” who “deliberately choose” to endanger us all with their potential “super spreading” event. To the NSW Mounted Police, they included a cruel horse-puncher who put “our beautiful brave (horse) Tobruk” through an “awful encounter”. And to glamorously made-up reporters and bouffant TV hosts who haven’t lost a day’s pay from lockdowns, the protesters were violent wackos throwing away everything we’d won through “our” sacrifice.
.
But to those who marched in Melbourne, Sydney and Brisbane, defying pepper spray and $1000 fines – and to sympathisers who didn’t dare join them – this abuse would confirm they were right. Our virus masters are dangerously drunk on their new powers, and would rather bully than listen.
.
Fair call. How does it help anyone when police, politicians and journalists treat scared and desperate Australians as scum, and stretch the truth to make them seem even scummier?
.
They’re just “halfwits”? True, some protesters think the virus is a hoax and vaccines a conspiracy. That’s a worry. But many there were panicked at losing their jobs, businesses and freedoms under restrictions that at times make no sense, certainly not to them.
.
“No more lockdowns, my kids need school, I need to work,” one protester wrote on the windscreen of a family SUV parked near the crowd.
.
And is it just “ratbaggery” if some said they were frightened by the push for vaccine passports, forcing them and their children to get injected with new vaccines they do not trust?
.
How can they be insulted like that, when even Queensland’s chief health officer ranted like an anti vaxxer against the AstraZeneca vaccine: “I don’t want an 18-year-old in Queensland dying from a clotting illness who, if they got Covid, probably wouldn’t die.”
I’m as appalled as anyone that a tiny minority of protesters in Sydney were violent, throwing things at police.
But journalists exaggerated that violence, with the Daily Mail describing a picture of police horse Tobruk that went viral: “Despicable moment maskless thug punches a police horse.”
.
In fact, video shows the protester not punching Tobruk but pushing away its head as it swung towards him in that “awful encounter” so hyped by NSW police.
Claims that these protests could be “super spreading” events are more spin. This virus is almost always spread indoors, not in the open air. Last year’s Black Lives Matter protests – also held during lockdowns – are not known to have infected a single person.
.
Sure, there’s still a tiny risk these protests will spread the virus, but the whole point of Saturday’s protest is that banning even outdoor political demonstrations is too much to pay to save us from a danger so remote.
.
It’s not as if “the experts” have been so right that they can now be so arrogant to those who doubt them. Australia’s chief medical officer last year predicted the virus would kill at least 50,000 of us. True death toll: under 1000.
.
State medical officers demanded we wear face masks outside. Now Australia’s former deputy chief medical officer, Nick Coatsworth, berates “alarmist” experts who “insist on masks outdoors for a disease that is spread indoors”.
.
Our governments swore these new vaccines had no long-term side effects, but now admit there’s a one-in-a-million chance of dying from blood clots from AstraZeneca, and a tiny chance of heart inflammation from the Pfizer vaccine.
I don’t blame experts for making honest mistakes about a virus this new and mutating fast, but none has the right to now humiliate Australians who don’t trust their every word.
.
Same with the NSW and Victorian governments. They’ve made plenty of mistakes themselves, and have no right to sneer like some Twitter troll at these protesters and their fears and their losses.
.
If politicians want to calm such protesters, they should try not this obscene arrogance, but humility and patience.
They should admit they’ve got things wrong, and could be wrong about some of these lockdowns, too. Maybe they haven’t considered properly the terrible pain they’ve caused.
.
More honesty would build more trust. But shouting “halfwit”, “boofhead” and “selfish” will convince no one – certainly not the frightened people who dared to march for their freedom, only to have their politicians kick them again.

One thought on “Seriously, is this where we’re going? Say NO to MARTIAL LAW!”