And his name is Dearlove.

You couldn’t make it up. Dearlove is even more clueless than Clueless Clapper. 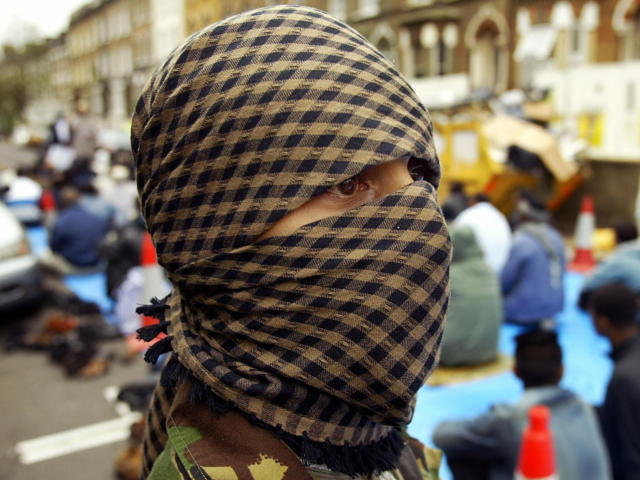 The former head of Britain’s Secret Intelligence Service has admitted that Muslim leaders in the UK have been “reluctant” to tackle the threat of Islamic extremism in their midst.

Amid heightened concerns over the threat of Islamist terrorism in the wake of the fall of Afghanistan to the Taliban following President Biden’s bungled withdrawal, former MI6 chief Sir Richard Dearlove has called on Muslims in Britain to help root out extremist elements within their communities.

Dearlove, who was the top spy at Britain’s CIA equivalent from 1999 to 2004, said that in the wake of the Afghan blunder, the UK will need to be more vigilant in combatting extremism but said that it is essential for local Islamic leaders to step up.

“If you are looking at Islamist extremism, the Islamic community should be dealing with it themselves and there is a reluctance for them to do so,” Sir Richard told The Telegraph.

“The structure of the community is such that some of their leaders are self-appointed and they are the wrong people for us to do dialogue with.

For decades Muslims have been telling Christians what to do.

They are purpose driven. Islam matters. Only Islam.

These “former heads of Britain’s Secret Intelligence Service” are pathetic.

There are so many Dearloves, male & female, hopelessly incompetent & inept.

They are too Intellectually lazy & disinterested to study Islam, so they babble stupidly about “extremism”, uttering platitudes & innuendo.

They are either unable come to grips with the ideology of our mortal enemy or they knowingly mislead & deflect from the problem because of their careers.

These career officials are useless. They should all be sacked.

The former MI6 chief said that the UK needs to be “very diligent” in the coming months, as young Muslims in Britain may be inspired by the Taliban victory.

“It’s a danger for any country with a large indigenous Islamic community that there are very small bits of it which might be susceptible to radicalisation,” he said.

“Generally I think our communities are better now than they were at policing themselves but they are certainly not perfect at it.”

The warnings from Dearlove come amid increasing concerns over a resurgent terror threat in the United Kingdom.

Last week, Colonel Richard Kemp, the former commander of British troops in Afghanistan, warned that Britain is facing “the greatest danger from terrorism since Islamic State at its height”.

Britain’s Armed Forces Minister James Heappey added that jihadis were “trying to take advantage” of the collapse of Afghanistan to enter into the UK.

Prime Minister Boris Johnson’s government raised eyebrows when it announced that immigration officials would not be requiring passports or other forms of identification for supposed Afghan asylum seekers, potentially clearing the way for terrorists to infiltrate the country.

British Border Force has already admitted that some of those who were evacuated from Kabul have either presented forged papers or none at all but that they failed to prevent them from entering the country for fear of sparking an “argument”.

While the UK is bracing for a new wave of potential terrorists amid the ranks of fleeing asylum seekers, there is already a large population of suspected jihadis within Britain.

Last year, it was reported that security services were aware of at least 43,000 terrorist suspects in the country, nearly double the amount previously disclosed to the public.

Despite failures of the UK’s deradicalisation programmes, Sir Richard Dearlove said that there are examples of success within the Muslim world.

“One of the pioneers in this field, who were very successful and very influential, was Singapore,” he said.

“The model the Singaporeans developed was used quite extensively and followed by other countries with large Muslim components and even countries which were majority Muslim.

“They used their own religious leaders to run their deradicalisation programmes. It’s a model which works.”

There is no “deradicalisation programme” anywhere in the world that works. All this is fairytale stuff, fantasy Islam meant to fool the kafirs. Not one believing Mohammedan has ever been “deradicalised”.