Where in the f*kc is this going?

CRAZY: Australian Authorities Show Up to Woman’s Home and Harass Her Over Social Media Posts: “We Have Instructions Because You Have Been Posting Things” – (Video)

Things just continue getting worse and worse for Australian citizens under the rule of their tyrannical health regime.

Scenes coming out of the country have been absolutely shocking. In response to the massive protests that have been going on for weeks, the radical-left Australian government has turned to brutal violence against its unarmed citizens in an effort to stamp out the unrest. Gangs of police rove the streets, beating people who dare to disobey before hauling them away.

Despite the violent crackdown, the massive protests have persisted for weeks and more people keep showing up. The crowds are so large that the Australian authorities are pressuring the government to issue no-fly zones over the areas with the most people in order to blackout the media.

Now in an attempt to get fewer people to go to protests, Australian authorities are showing up at people’s homes and intimidating them because they’ve made unapproved posts on social media. Recently, two government officials were caught on video when they showed up at an unsuspecting woman’s home and attempted to bully her into not leaving her house. 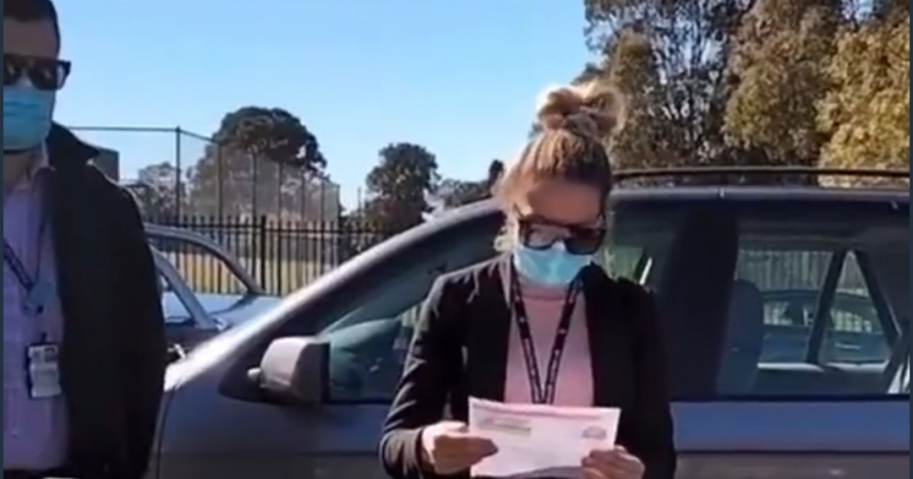 After the two covid-Gestapo gave the woman a hard time for (rightfully) keeping a camera on them, they explained to her that they had “instructions” to come speak with her specificallybecause she had been “posting things on social media” about an upcoming protest on Tuesday.

“I’m here to remind you to ensure that you need to stay at home in relation to Covid stay at home orders and if there is or is not a protest on Tuesday – regardless – you still can’t leave [your home] and go to a protest of any sort.“

When the woman recording the video pushes back on them, the pair of goons even admits that protesting is a constitutional right for Australians, but they don’t care at all – they are following orders…

…and you better too – Stay inside, or else.

“That is correct, you are allowed to go protest – but at the moment we have stay-at-home orders, okay? And that means we are not allowed to leave without a valid reason for leaving your home.

You cannot go and attend a protest whether it is in the city, [unintelligible] – I don’t know where or what is going on, but you can’t go and do that right now because at the moment we have stay-at-home orders.”

These people will twist anything so it fits their BS. Their level of commitment is shocking.