Pfizer is a gangster company. I doubt that the others are better.

Now they’re admitting that large numbers of people are dying from that dirty vax:

BREAKING: Pfizer says it has developed a new Covid-19 pill that reduces deaths and hospitalizations in high-risk patients by 89%.

Pfizer Inc. said its Covid-19 pill reduced hospitalizations and deaths in high-risk patients by 89%, a result that has the potential to upend how the disease caused by the coronavirus is treated and alter the course of the pandemic. The shares surged 11%. 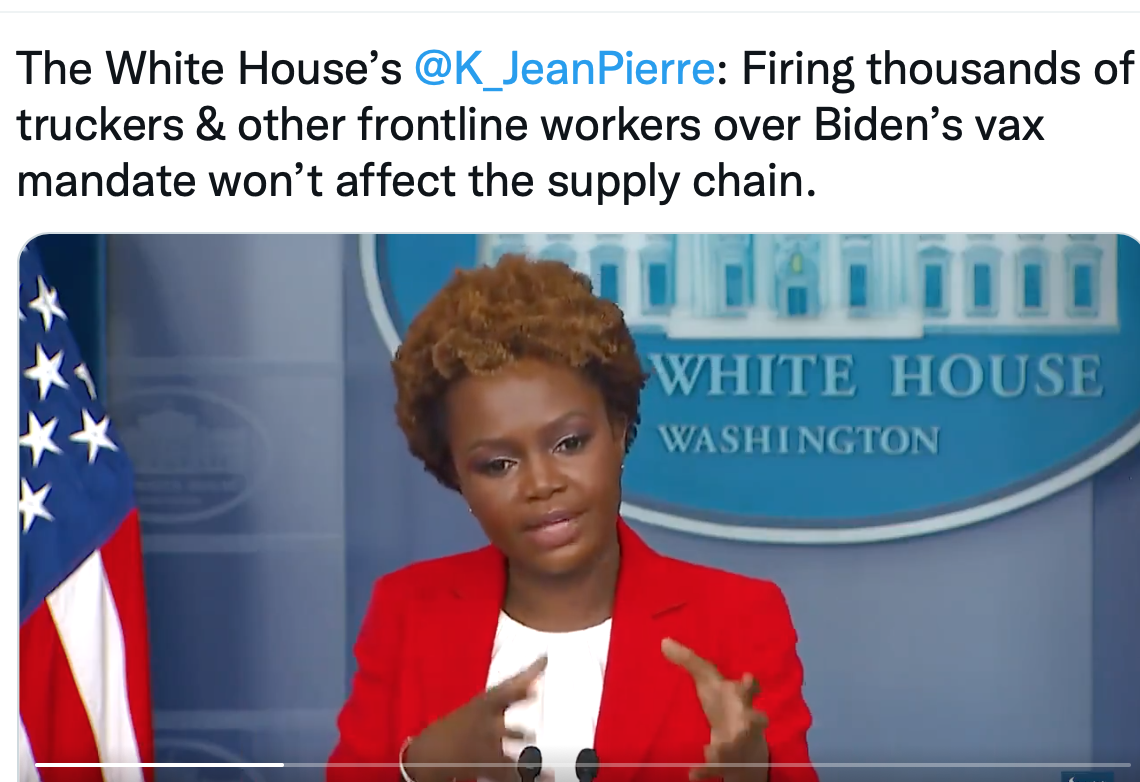 Economic illiteracy in the WH is a b*tch: 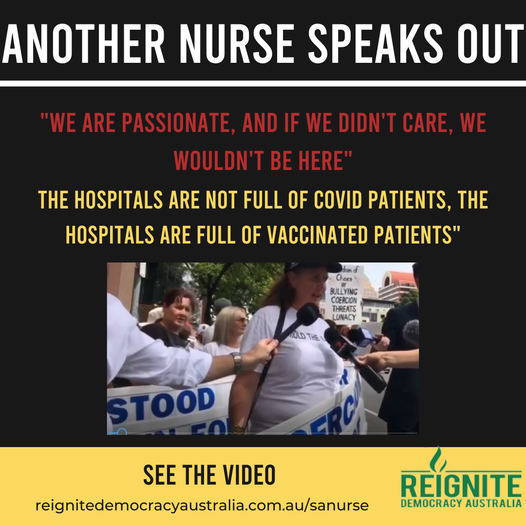 If you were wondering why Ivermectin was suppressed, it is because the agreement that countries had with Pfizer does not allow them to escape their contract, which states that even if a drug will be found to treat COVID-19, the contract cannot be voided.”

Unredacted contracts for the experimental biological agent known as the “COVID-19 vaccine” between the Pfizer corporation and various governments continue to be revealed.

Information security expert Ehden Biber told America’s Frontline Doctors (AFLDS) Frontline News that the first document to recently emerge was discovered by Albanian newspaper Gogo.al.  Biber then was able to locate the digitally-signed Brazilian contract, and at least two others, one with the European Commission, and the other with the Dominican Republic.

AFLDS Chief Science Officer Dr. Michael Yeadon responded to the revelations after perusing the Albania contract, saying it “looks genuine.” He continued: “I know the basic anatomy of these agreements and nothing is missing that I’d expect to be present, and I’ve seen no clues that suggests it’s fake.”

Yeadon noted what he found “the most stunning revelation,” citing the clause that stipulates “if there are any laws or regulations in your country under which Pfizer could be prosecuted, you agree to CHANGE THE LAW OR REGULATION to close that off.” (emphasis his)

In a Twitter thread that has since been removed except the first tweet in the thread, Biber explained the significance of the revealed agreements: “Because the cost of developing contracts is very high and time consuming (legal review cycles), Pfizer, like all corporations, develop a standardized agreement template and use these agreements with relatively minor adjustments in different countries.

“These agreements are confidential, but luckily one country did not protect the contract document well enough, so I managed to get a hold of a copy.

“As you are about to see, there is a good reason why Pfizer was fighting to hide the details of these contracts.”

“First,” Biber continues, “let’s talk about the product: The agreement not only covers manufacturing of vaccines for COVID-19 and its mutations, but also for ‘any device, technology, or product used in the administration of or to enhance the use or effect of, such vaccine.’

“If you were wondering why Ivermectin was suppressed, it is because the agreement that countries had with Pfizer does not allow them to escape their contract, which states that even if a drug will be found to treat COVID-19, the contract cannot be voided”

“Supplying the product: ‘Pfizer shall have no liability for any failure to deliver doses in accordance with any estimated delivery dates… nor shall any such failure give Purchaser any right to cancel orders for any quantities of Product.’

‘Pfizer shall decide on necessary adjustments to the number of Contracted Doses and Delivery Schedule due to the Purchaser … based on principles to be determined by Pfizer … Purchaser shall be deemed to agree to any revision.’

“Just to make it clear: ‘Purchaser hereby waives all rights and remedies that it may have at Law, in equity or otherwise, arising from or relating to:.. any failure by Pfizer to deliver the Contracted Doses in accordance with the Delivery Schedule.

“Once again: ‘Under no circumstances will Pfizer be subject to or liable for any late delivery penalties.’

“You can’t return the product, no matter what: ‘Pfizer will not, in any circumstances, accept any returns of Product (or any dose)…no Product returns may take place under any circumstances.’

“Now for the BIG SECRET: $12 per dosage for about 250K units. Funny that this is the price for a small amount of dosages when Pfizer was charging the U.S. $19.50 per dose.

“About payment, the country has no right ‘to withhold, offset, recoup or debit any amounts owed to Pfizer, whether under this Agreement or otherwise, against any other amount owed (or to become due and owing) to it by Pfizer or a Pfizer Affiliate.’

“Damaged goods: THE ONLY WAY to get a recall is if you can prove cGMP fault.

“‘For clarity, Purchaser shall not be entitled to reject any Product based on service complaints unless a Product does not materially conform to Specifications or cGMP.’

“This agreement is above any local law of the state.

“Termination for cause: There are clauses about termination possibility, but in fact, as you saw so far, the buyer has almost nothing that can be considered a material breach, while Pfizer can easily do so if they don’t get their money or if they deem so.

“You must pay Pfizer for the dosages you ordered, no matter how much you consumed, regardless if Pfizer got it approved (it was a pre-EU approval) or if they delivered the Contracted Doses in accordance with any estimated delivery dates set forth herein.

“‘Purchaser hereby agrees to indemnify, DEFEND AND HOLD HARMLESS Pfizer, BioNTech (and) their Affiliates…from and against any and all suits, claims, actions, demands, losses, damages, liabilities, settlements, penalties, fines, costs and expenses…’

“The state must defend Pfizer: ‘(Pfizer) shall notify Purchaser of Losses for which it is seeking indemnification… Upon such notification, Purchaser shall promptly assume conduct and control of the defense of such Indemnified Claims on behalf of (Pfizer)’:

“However, ‘Pfizer shall have the right to assume control of such defense… and Purchaser shall pay all Losses, including, without limitation, the reasonable attorneys’ fees and other expenses incurred.’

“Pfizer is making sure the country will pay for everything: ‘Costs and expenses, including… fees and disbursements of counsel, incurred by the Indemnitee(s) in connection with any Indemnified Claim shall be reimbursed on a quarterly basis by Purchaser’:

“Liability: ‘This shall not include, nor constitute, product liability insurance to cover any third party/patients claims and such general liability insurance shall be without prejudice to Purchaser’s indemnification obligation as set out in this Agreement.’

“There is no limit to the liability of the country in case of ‘the indemnity given by it under Section 8 (Indemnification)’ or if the Purchaser failed to pay Pfizer:

“The Purchaser waives any right for immunity, it give up any law that might cap the obligation to pay damages to Pfizer. Comment: The court in New York has the capacity to hold international assets of a country if the country failed the contract.

“Condition to supply: Purchaser must provide Pfizer protection from liability for claims and all Losses, must implement it via statutory or regulatory requirements, and the sufficiency of such efforts shall be in Pfizer’s sole discretion.

“Confidentiality, part 3: The contract must be kept confidential for 10 years. Why 30 years in Israel?

“‘The provisions of this Section 10 (Confidential Information) shall survive the termination or expiration of the this Agreement for a period of ten (10) years’:

“Arbitration and governing laws: Arbitration must be done in New York, in according to Rules of Arbitration of the International Chamber of Commerce, governed by the laws of the State of New York, USA:

“If a specific ministry was assigned to safeguard the contract, they must continue to so: ‘…attempted assignment of rights or delegation or subcontracting of duties without the required prior written consent of the other Parties shall be void and ineffective.’

“I first stumbled upon a document, called KONTRATEN-E-PLOTE which translates to ‘read the full contract’.

“Only later I discovered it was Albanian website that has published it on January 2021. They deserve ALL the credit for the leakage of the document, and journalists around the world deserves the shame for not discovering and reporting it.

“Countries might claim they negotiated a better deal, but based on the evidence we have received from South America it seems this contract is real, and that it’s similar to what was used worldwide.

“‘One Health Ministry official, Yaron Niv, said in a separate Kan interview that each dose cost Israel $62.’ Netanyahu is indeed a magician – he got Israel to pay 5 times more than Albania and made people worship him for this BAD deal.

“This contract is actually worse than it seems.

“Current Good Manufacturing Practice (CGMP) is regulated by the FDA. cGMP will tell you NOTHING about mRNA, because we never had cGMP of mRNA vaccine, so you cannot prove cGMP malpractice. Tweet

“Addendum: Former president of Pfizer in Brazil and CEO for Latin America testified to the Brazilian committee that Pfizer demanded the same condition for vaccine purchase from all countries:

“Former president of Pfizer in Brazil and CEO for Latin America Carlos Murillo today said in testimony to the COVID CPI that the clauses proposed by the pharmaceutical company for the offer of vaccines to Brazil are not ‘preeminent’, as stated by the former minister of Eduardo Pazuello Health.

“According to Murillo, Pfizer demanded from all countries the same conditions for the purchase of vaccines against COVID-19. In addition, he said that claims that the drug maker would have demanded state assets such as embassies and military bases as collateral are not correct. ‘It’s distorted information,’ he declared.”

Biber concluded: “To those [who] think it is a fake: My university law professor said laws are like computer code. They use legal functions, and variables, and processes. I worked in Big Pharma, I reviewed many contracts in my career, and this document seems to me as real as can be.

“I wrote this on the 13th of July: ‘Israel has turned into a pharmaceutical Banana Republic, where the priorities of a multinational supersedes the priorities of its citizens. It is no longer the Jewish motherland, it is Pfizerland.” Tweet

Note to readers: Instagram, @crg_globalresearch. Forward this article to your email lists. Crosspost on your blog site, internet forums. etc.