John Kerry is arguably one of the dumbest men to ever enter politics. 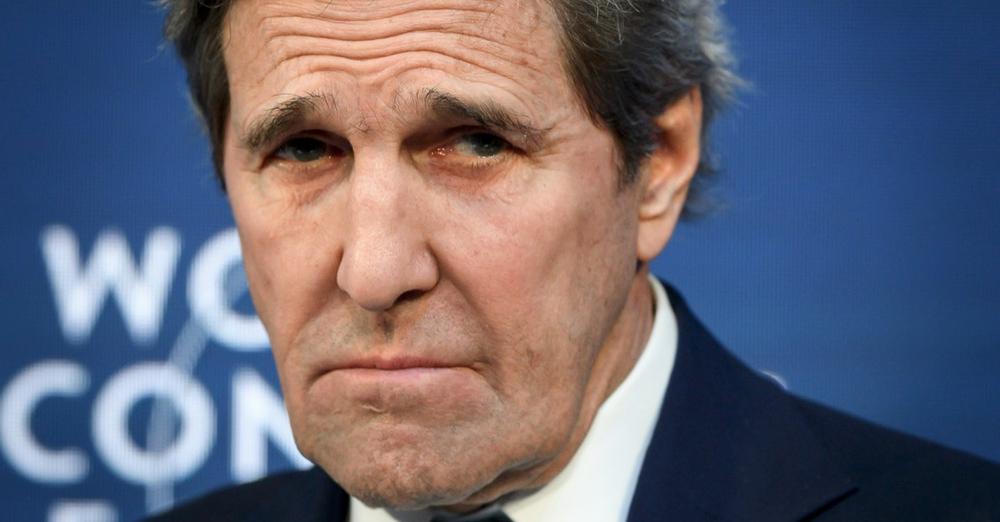 Vladimir Putin’s invasion of Ukraine marks the end of the West’s Era of Illusions.

It was an era in which Western elites were obsessed with solving climate change because the climate crisis was far more dangerous than issues of war and peace and the stability of the international system. [bold, links added]

They even convinced themselves that climate change causes war, so climate change policy could double as national security policy; and for many years, the annual round of Kumbaya UN climate talks was the apogee of international relations.

In a BBC World Service interview, presidential climate envoy John Kerry expressed concern about the amount of greenhouse gas being emitted from the war in Ukraine.

Kerry was just getting warmed up with a string of platitudes that show him as a deluded climate relic, unable to come to terms with the reality that Putin has imposed on the world.

“Equally importantly,” Kerry complained, “you’re going to lose people’s focus,” as if the first invasion of a sovereign European country since the Second World War is an annoying distraction.

Hopefully, Kerry continued, Putin would realize that Russia’s land is thawing, and the people of Russia are at risk.

Kerry concluded with an expression of pure self-deception, saying he hopes Putin “will help us to stay on track with respect to what we need to do for the climate.”

Stay on track? Russia has never hidden its intention to avoid cutting its emissions. Russia’s second Nationally Determined Contribution, submitted in November 2020 under the Paris climate agreement, is to limit its 2030 emissions to “no more than 70% of 1990 levels.”

The document is careful to avoid pledging to cut or reduce emissions. The 1990 baseline year was the last one before the collapse of the highly inefficient and heavily polluting centrally planned Soviet economy.

Thus, the 70% limit actually enables Russia to increase its emissions by 34% – and that’s before taking account of any changes in forestry and land use that would allow Russia to claim credit for negative emissions.

Despite Kerry’s claim about the thawing of their frozen north, Russians’ indifference to climate change predates Putin’s rise to power.

During the preparation of the Intergovernmental Panel on Climate Change’s (IPCC) first assessment report in 1990, Soviet scientists argued that warming might be beneficial at northern latitudes.

Yuri Izrael, the Soviet academician and chair of the IPCC’s working group examining potential impacts of global warming, emphasized the doubt and uncertainty of climate change and disputed claims that it would be harmful.

At a 2005 conference on avoiding dangerous climate change organized by Britain during its G-8 presidency, Putin’s former economic adviser, Andrei Illarionov, challenged the premise of the conference.

“Anyone who is frightened about the prospect of global warming is welcome to come and live in Siberia,” Illarionov told a journalist.

Indeed, a strong case can be made that Russian climate scientists have a better understanding of climate science and the likely impact of rising levels of carbon dioxide on global temperatures than their colleagues in the West.

In testimony to Congress in 2016, John Christy, the Alabama state climatologist and director of the Earth System Science Center at the University of Alabama in Huntsville compared 102 climate-model simulations against the observed global temperature of the mid-troposphere from satellites and balloons (the troposphere is the lowest layer of the atmosphere, up to a height of around 33,000 feet).

On average, the models warmed the atmosphere at a rate two-and-a-half times faster than what happened in the real world.

The only model that produced simulations close to observations was the Russian INM-CM4 climate model. Small wonder Russians are disinclined to believe there’s a climate crisis.

When it comes to the science of climate change, there can be few people quite as gullible and simple-minded as John Kerry.

“I can remember from when I was in high school and college, some aspects of science or physics can be tough – chemistry. But this is not tough,” Kerry told an audience of school children in Indonesia in 2014 when he was secretary of state. “This is simple. Kids at the earliest age can understand this.”

The science was “absolutely certain,” Kerry claimed. “Let me give you an example. When an apple separates from a tree, it falls to the ground.”

Contrast Kerry’s simplistic analogy with this statement in the IPCC’s third assessment report: “The climate system is a coupled non-linear chaotic system, and therefore the long-term prediction of future climate states is not possible,” the IPCC said in 2001 before it became deeply politicized as it is now.

There is, however, one area where Kerry and Putin are likely to find themselves in full agreement.

Two years ago, at a business conference in Moscow, the Russian president denounced fracking as “barbaric,” claiming that fracking technologies “destroy the environment.”

“This is likely reflective of the Russian Government’s concern about the impact of fracking and US natural gas production on the global energy market and the potential challenges to Gazprom’s [the Russian state-owned energy company] profitability,” the assessment concluded.

In June 2014, Kerry’s predecessor as secretary of state complained about the impact of Russian money on financing “astroturf” environmental campaigns.

“We were up against Russia pushing oligarchs and others to buy media. We were even up against phony environmental groups, and I’m a big environmentalist, but these were funded by the Russians to stand against any effort. ‘Oh that pipeline, that fracking, that whatever will be a problem for you,’ and a lot of the money supporting that message was coming from Russia,” Hillary Clinton said.

Putin understands the importance of energy as an essential component of American strategic power. John Kerry does not.

That is why, to borrow from Lenin, Kerry acts as Putin’s useful climate idiot. Putin’s invasion of Ukraine plunges the world into its gravest emergency since the Cuban missile crisis sixty years ago.

It puts into perspective the folly of those, like Kerry, who confuse imaginary crises with real ones.

Rupert Darwall is the author of Green Tyranny.