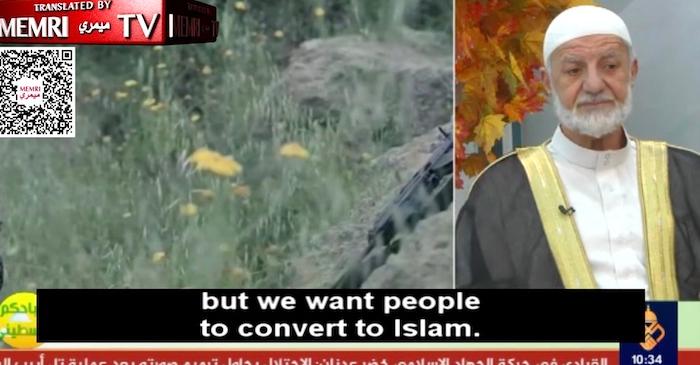 Islamic scholar: ‘Jihad is a means to spread this religion until all the people become Muslims’

The Quran and Islamic law repeatedly call for violence against disbelievers in order to convert them to Islam or subjugate them under the hegemony of Islamic law. The world in Islam is divided into two: the dar al harb (house of war) and the dar al Islam (house of Islam). War is waged against the house of war in order to turn its territory into the house of Islam. The strategy includes stealth subversion, but when Muslim demographics increase, calls for violence become more bold and aggressive (as we see in open calls to “globalize the intifada.” See also HERE) and physical violence increases, especially against anyone who is considered to have insulted Islam. The more emboldened Islam becomes in any given country or territory, the more violent it becomes. The violent Muslim Brotherhood in Egypt, for example, is very different in character from the Muslim Brotherhood offshoots in the West. Likewise, Hamas, another Muslim Brotherhood offshoot, is openly violent.

Although Western media are providing daily coverage of the Temple Mount violence, there are no reports about any widespread opposition to Dabbous’s words, nor any mainstream media coverage about him. Leftists and appeasers conveniently ignore him and others like him, since his words don’t fit their construction of reality.

Just a reminder: why they hate us

The Islamic State reveals why it hates us, and so do their Islamic supremacist cohorts

The article below discusses “Why We Hate you and Want to Fight You” from the ever untruthful, untrustworthy and unreliable Islamic State brutes, who delivered a message to the West in hopes that Westerners will actually take them at their word. Leftists actually do, and herein lies (no pun intended) the problem.

The six reasons specified by the Islamic State are a dangerous blend of truth and lies. The Islamic State says first that it hates us because we are disbelievers; in other words, it’s all about Islam, despite what our leaders claim. And yes, they hate (and want to kill) gays and “corrupted” Westerners, but if their stalwarts commit the very same act of homosexuality, as did the Bastille Day jihad killer Mohamed Lahouaiej Bouhlel and supposedly also the Pulse Nightclub murderer Omar Mateen (although those claims have been discredited), then all will be forgiven when the jihadi sacrifices the blood of infidels in an act(s) of martyrdom.

“Even if you were to stop bombing us, imprisoning us, torturing us, vilifying us, and usurping our lands, we would continue to hate you because our primary reason for hating you will not cease to exist until you embrace Islam.”

This is the reason why all Islamic supremacists hate the West (and Israel). There is moreover, a problem in how the Islamic State’s article itself may be interpreted, as it implies that the Islamic state is an aberration in its acrimonious hatred of the West; the near-ubiquitous hatred among Muslims against the West is thus once again concealed.

In a photo caption accompanying its story on the Islamic State’s article, the Mirror says: “The jihadis have developed a twisted interpretation of the Islamic holy book.” This is outright wrong: the jihadis follow a non-negotiable, literal interpretation of the Qur’an, Hadith and Sunnah, in contradiction of the declaration by Pope Francis (as Jihad Watch reported today) that “it’s not fair to identify Islam with violence. It’s not fair and it’s not true.”

Recall that only weeks before the Pulse massacre in Orlando, Islamic scholar Imam Farrokh Sekaleshfar preached at a mainstream Orlando mosque about killing gays in the name of Islam as a dutiful act of love, stating that “Islam has to protect the souls. Killing the souls of people is much worse than killing the physical sides of people…In Islamic society, where people want the law of Islam to rule, we have to execute it.” This preacher is not isolated, and neither is the Islamic State in its hatred against homosexuals, which is rooted in Islamic doctrine and found in prominent and authoritative manuals of Islamic jurisprudence.

Their hatred does not stop with gays, although it may be more intense against them. In normative Islam, hatred of unbelievers is so deeply entrenched that the West cannot fathom it; hence Westerners cling to the drivel that such hatred could only have somehow been provoked. The Islamic State cites past Western sins as another reason for its hate, and Islamic supremacists – both violent and stealth – frequently do the same. They routinely preach that it is the West (specifically Europeans and Jews) that has so victimized Muslims in “their” own lands, that not only were scars left, but also a just cause created for Muslim hatred. But the violent jihad conquests of the seventh century, destroying the Christian culture of North Africa and the Middle East, took place long before colonialism; and although the Crusades drew the sword against innocents, they also stopped the Islamic marauders from completely conquering Europe and Christianity itself.

The hatred that jihadis have for unbelievers has nothing to do with anything Westerners have done. Islamic supremacists meditate on prayers of hate and messages of hate. Even Muslim men have been “counseled” that it is right to hate their non-Muslim wives and treat them as meat, as the prominent Muslim preacher Dr. Yassir Burhami has stated:

“Whoever rapes a woman, does he necessarily love her? Or is he just sleeping with her?….This is why he’s discouraged from marrying among the People of the Book—because she has no [real] religion. He is ordered to make her hate her religion while continuing marriage/sexual relations with her.”

In their arrogance, Westerners continue to deny the cause of Muslim hatred against them. They fool themselves into believing propagandists who claim that hatred must be rooted to past wrongs. Yet top Islamic jurists including Ibn Taymiyya and Ibn Qayyim saw the building of churches as being “worse than building bars and brothels, for those [churches] symbolize infidelity, whereas these [bars and brothels] represent immorality.” Such thinking was and is still rooted in obedience to the words: “Surely the vilest of animals in Allah’s sight are those who disbelieve” (Qur’an 8:55).

The grim truth is that Islamic hatred against the West is not exclusive to the Islamic State, al Qaeda or any overt faction of jihad by the sword. Indeed the Islamic State jihadis who embrace such doctrines represent the most violent form of political Islam, but the ideology they follow is ingrained in normative Islam, so that even those Muslims who reject such teachings of conquest and hate, and who hope to see the practice of Islam reformed, are deemed apostates by their own.

It behooves blind Western men and women to claim that the Islamic State and al Qaeda are aberrations of Islam in sustaining the structure of political correctness and a convenient false hope. No one wants to hear of war, but the West is at war, whether we choose to believe it or not. It is at war with the forces of political Islam that rule the Middle East and countries in Africa and Asia, and that seek global conquest.

The legendary scholar Bernard Lewis once hoped that Muslims in the West could become “beacons of enlightenment,” projecting light back to their old counties, but the opposite happened, and continues to happen. As the Iranian-born writer Amir Taheri states: “Instead of exporting ‘light’ back to the Muslim world, a growing number of Muslims in Western democracies have become importers of darkness in their new abodes.”

2 . Because you are liberal
“We hate you because your secular, liberal societies permit the very things that Allah has prohibited while banning many of the things He has permitted, a matter that doesn’t concern you because you Christian disbelief and paganism 32 separate between religion and state, thereby granting supreme authority to your whims and desires via the legislators you vote into power.”

3. Because some of you are atheist
“In the case of the atheist fringe, we hate you and wage war against you because you disbelieve in the existence of your Lord and Creator.”

….”What’s important to understand here is that although some might argue that your foreign policies are the extent of what drives our hatred, this particular reason for hating you is secondary, hence the reason we addressed it at the end of the above list.

“The fact is, even if you were to stop bombing us, imprisoning us, torturing us, vilifying us, and usurping our lands, we would continue to hate you because our primary reason for hating you will not cease to exist until you embrace Islam.”