ANDREW BOLT: “Whether you like Avi Yemini, if you think of him as a hero, or you don’t, this is about free speech. And New Zealand, you should be ashamed of yourself.”

After being blocked from entering the country, Australian correspondent Avi Yemini joins guest host David Menzies on the Ezra Levant Show to explain his next steps in his fight to tell the other side of the story from New Zealand. 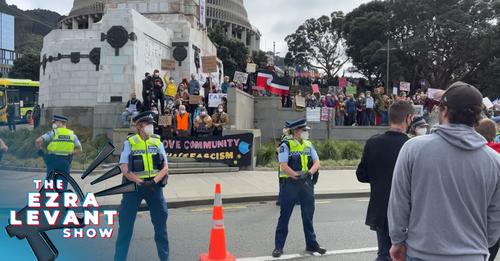 Avi Yemini, Rebel News‘ chief Australia correspondent, was recently barred from entering New Zealand to cover a large anti-government protest in the nation’s capital, Wellington. The potential presence of Yemini, alongside fellow independent journalist Rukshan Fernando, stirred up quite a buzz in the small island nation.

The country’s largest news outlet, the New Zealand Herald, ran two stories about the pair, the first warning that “Australian conspiracy commentators” were headed to New Zealand. This story, according to Avi, was what likely led to his denial of entry by a New Zealand customs official. This incident subsequently led to a second story from the Herald, which noted that the “infamous Australian far-right misinformation superspreader has reportedly been denied entry.”

Avi joined guest host David Menzies on last night’s episode of The Ezra Levant Show to explain the next steps in his fight to tell the other side of the story from New Zealand.

As Avi explained, the decision to block him from the country stems from previous legal troubles. But was that really enough to deny him entry?

Describing the decision as “politically motivated,” Avi told David that:

The threshold [for denial of entry] is that you’ve got to have been in jail for at least 12 months in the last 10 years for that conviction. My minor conviction, it carried a fine. It was the most basic entry-level conviction you can get.

So there was no real grounds, there was no lawful grounds in using that conviction from stopping me to enter to cover protests.

At the end of the day, I will get to New Zealand. I will prove those headlines to be false. I will tell the other side of the story there, I will give those people who, for the last two years, have been stopped from being allowed to have their say. I’m going to give them that platform, that the entire establishment have worked so hard in New Zealand to suppress.

We’re going to succeed, and the fact that I’m going to get there proves that this was all politically motivated and just to stop me from going to that protest. I’m going to promise you now, I promise the audience, it will backfire.

To show your support for Avi as he fights for access to tell the stories of New Zealanders, visit SaveAviYemini.com.