Pro-Lula protestors in Brazil call for “Communism” and “no immunity” for former President Bolsonaro.

According to the dimbulbs from DW, Lula is “not a communist”. 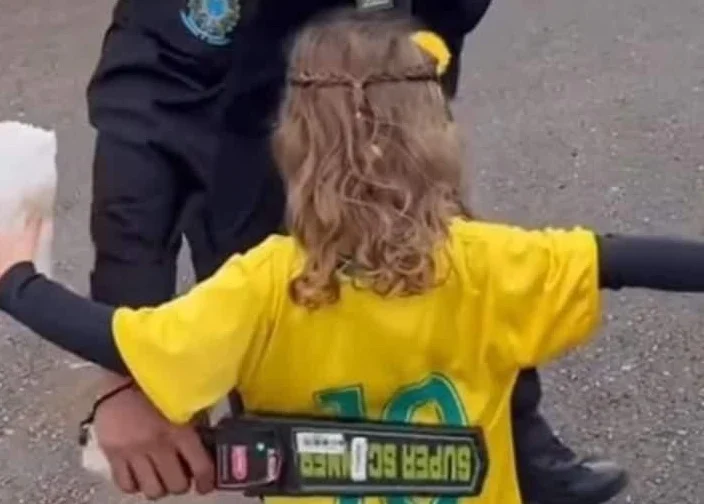 The US has begun deporting Brazilian opposition leaders to the Gulags as evidence mounts the Jan. 8 riots were staged. US journalist Glenn Greenwald complained about the Communist takeover he helped enable: Chief Justice Alexandre de Moraes is “making himself chief censor of the world,” Greenwald said. Speaking to Steve Bannon, Brazil observer Matt Tyrmand said: “They are going full Gulag. This is the worst Communist takeover ever.”

Senator Marcos do Val says he has new evidence against the incoming leftist Justice Minister Flávio Dino in the so-called “Storm on the National Congress” Jan. 8 and will ask for  Dino’s removal and arrest.

Dino was “aware of the risk of hostile actions and damage to the government buildings” January 8, Antagonista reports: ”In a letter sent the day before to the governor of the Federal District, Ibaneis Rocha, the minister said he had been informed by the Federal Police of the “intense movement of people who, dissatisfied with the result of the 2022 Elections”, organized “bus caravans to move to Brasilia/DF”.

“According to reports, this movement would have the intention of promoting hostile actions and damages against the public buildings of the Ministries, the National Congress, the Presidential Palace, the Federal Supreme Court and, possibly, other bodies such as the Superior Electoral Court,” Ibaneis Rocha wrote.

This particularly ironic because Bolsonaro disappointed many supporters by not calling the elections stolen or taking any steps to prevent the Lula takeover. In 72 days of protests, Bolsonaro spoke to supporters only once, to lead them in prayer in a tearful scene with his wife (Gateway reported).

41 US “Democrats” have called for revoking Bolsonaro’s visa, who is staying in Florida, presumably so he can be put in the “Lulag” too, along with the rest of the US-based opposition. US police officers in Florida were seen deporting former Secretary of Security of the Federal District Anderson Torres on the night of Friday, 1/13. Brazilian police raided Torres’ house and allegedly found a draft decree proposing the introduction of martial law to overturn the result of the country’s presidential election, a Justice Ministry spokeswoman told CNN.

The Communist government is holding 1159 protestors in Federal Prison without access to lawyers or charges, forcing them to sign confessions of “terrorism”. At least one protestor appears to have attempted or committed suicide and 3-4 others reportedly died of dehydration and medical emergencies. There is a total press blackout on these deaths.

The Lula Regime is clamping down on the opposition suspending leading channel Jovem Pan as well as prominent opposition figures like host Monark, Congressman Nikolas Ferreira and influencer Barbara of channel “Te Atualizei”, who all had their Twitter accounts suspended. Monark had 1.4 million followers and Ferreira 2 million.

But the breadth and scope of this order — directing multiple platforms to immediately ban multiple politicians and analysts *within two hours,* upon threats of major fines – brings this to an all new level.

Join us tonight, 7pm ET, for our live coveragehttps://t.co/weskVEoQau

Left-wing Snowden reporter Glenn Greenwald, who lives in Brazil and was a vocal critic of Jair Bolsonaro, has realized his own liberty is now in danger and is apparently getting a severe case of Communist Gulag buyer’s remorse: “We just obtained a censorship order that is genuinely shocking, directing multiple social media platforms to *immediately* remove numerous prominent politicians and commentators”, Greenwald wrote.

Elon Musk responded to Greenwald, asking for more info. Greenwald responded that “I can’t post it yet – just waiting for last legal clearances from our lawyers. It’s insane that, as a journalist, I even need to worry about this, but that’s the climate here” (in Brazil).

A video from the “Lulag” prison camp showed police asking the political prisoners who among them was feeling sick. “A girl raised her hand and went to front thinking she would be helped. The officers screamed at her, ripped off what was on her head, then kicked out her legs & tackled her to ground. Army present, watched it all. Did nothing. Inhuman,” Matt Tyrmand wrote.

Speaking to Steve Bannon on “War Room”, Tyrmand said that Brazil had gone from “zero to Stalin in no time.” What happened on Jan. 8 was a “template learned from Jan. 6 – coax ‘em in, show that your agents provocateurs are destroying everything, and then arrest all the patriots, and send a message to the rest of the country. They created a Gulag at the Federal Police Academy and rounded up 1700 people, old women and men, young kids, every race, Brazilian patriots through and through…

We have video of them getting into arguments with the agents provocateurs(during the riot), saying ‘Don’t  break this window, this is our house.’ They were trying to (protest) peacefully, as they had done 72 days previously, because these are peaceful, patriotic warriors. They got cornered and gulaged, and at least one woman died of dehydration. Unconfirmed reports say that 4-5 people have died.”

Prisoners were forced to sign confessions with no legal advisory, Tyrmand said. “The men and more able-bodied females have gone into a Federal Penitentiary, with no charges, no due process, no investigation, no trial, and they are now in jail. Gateway Pundit had a letter describing the absolutely inhumane conditions,” Tyrmand noted.

The regime is calling the protestors “terrorists” now, Tyrmand said. “They are trapped like sardines in these small facilities, literally cloaked in the Brazilian flag to keep warm at night, kids lying on the Brazilian flag as a mat, talk about a powerful poetic symbol.”

The Lula Regime has gone “hogwild on the censorship”, Tyrmand said: “Jovem Pan news has been kicked off the air, the Brazilian equivalent of Fox news, Paulo Figueiredo Filho and all of the right-wing journalists have been deplatformed. The extradition notices are being drawn up, for the journalists and pastors and activists who have residence in the US. They’re putting out red notices, reiterating the call to extradite (leading journalist) Allan dos Santos.”

Jair Bolsonaro, who remained silent for two months of protests, is nonetheless being charged for “sowing distrust in the election system” for asking for auditable paper ballots, Tyrmand said. “Everybody is going to jail. They used a Hitler Reichstag Fire to cement power”, Tyrmand said.

Lula da Silva is “just a figurehead”, Tyrmand noted, the real power lies with Chief Justice Alexandre de Moraes. “They are going full gulag, it is absolutely gross. Even Glenn Greenwald, who helped build this, cheerleading the fight for Lula against Bolsonaro, now he’s giving a press conference, because now they’re trying to censor him.”

Moraes should be “in the Hague”, Tyrmand said, “Because people are dying in the makeshift Gulag and the prisons. And everybody who was put in federal penitentiary was force-vaxxed. If this is not a violation of the Geneva convention, it is worthless. Where is Human Rights Watch? Where is Amnesty International? Where is the United Nations Charter for Indigenous Rights, given that Chief Serere Xavante is still in prison because he is a brave soul with faith, and he is not signing the denunciation letter that they have been torturing him to get him to sign. This is the worst Communist takeover ever.”

Truth Brazil has launched a petition to investigate the failure of the Justice Minister, which you can sign and share here: