But of course, no illusions here. They follow the path of ‘gradualism’, you see. Ask Yusuf al Qaradawi, he’ll tell you all about it.

You can also look at the Islamically green pavements of Sarajevo: Green pavements deemed “provocation”Â to get an idea where Islam takes them.

thanks to Pamela for the tip.

Willie Climan’s war against the Christian Serbs continues to this day:

Remember this Clinton Moment Celebrating the al Qaeda Jihadists that massacred the Serbs with his help?

“Turkey’s victory is our victory,Â as a Muslim country Bosnia cannot be considered separate from Turkey.”

The president of the Serb Republic (RS) deduced that this was “leading toward a creation of a Sharia state”.

“I have nothing against Bosniaks and Islam, I respect freedom of religion, but it is the desire of the Islamic Community in Bosnia-Herzegovina to direct political processes in the country that is completely unacceptable,” he said.

The president added that this community was attacking the RS and him personally, “to which I have a duty to react, as president and politician”.

This was Dodik’s response to announcements that came from the Islamic Community (IZ) in Bosnia-Herzegovina, that they would send a proposal to embassies of Islamic countries to declare him persona non-grata for his alleged activity to “spread Islamophobia”.Â

“The IZ statementÂ is a political pamphlet of the lowest kind. It’s proof that Mustafa CeriÄ‡ is the leading political figure among Bosniaks, which is one step toward creating a Sharia state,” Dodik concluded.

END_OF_DOCUMENT_TOKEN_TO_BE_REPLACED

* Obviously, it didn’t occur to them to plant some trees… 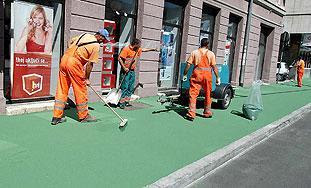