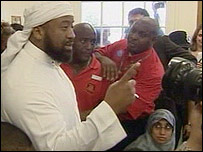 For Al Bebeceera this raving PoS is still an ‘activist’

Mr Izzadeen is being held at a central London police station
A Muslim activist has been arrested in east London over allegations of encouraging terrorism.
Abu Izzadeen was held by in Leyton High Road by counter-terrorism officers, Scotland Yard said.

He hit the headlines last September after heckling Home Secretary John Reid but it is understood the inquiry is related to a 2006 speech in Birmingham.

Mr Izzadeen, 31, is being held at a central London police station under Section 1 of the Terrorism Act 2006.

He has been associated for some years with radical Islamist politics in the UK and has been a member of two now illegal groups, Al Muhajiroun and Al Ghurabba.