Chipping away on freedom of expression and freedom of speech, bit by bit:

Islamic nations around the world have never signed up to human rights. In fact, all they have ever done is issued the ‘Cairo Declaration of Human Rights’ which diverges from the Universal Declaration of Human Rights in key respects, most notably in that the former unambiguously recognizes only those human rights that are in accordance with Sharia.

To put it mildly, anyone who buys this ‘Islamic Human Rights’ bullshit is either a complete idiot or an agent for Islam. Human rights and Islam don’t mix, the two are like fire and water.

‘Human Rights’ under Islam are about as good as a burka can be. Besides, there are no reciprocal agreements: Its a one way street to Islam, Islam and nothing but Islam.

The way of the left, the idea that you can fight bigoted intolerance with tolerance, is like trying to put the fire out with gasoline.

Strangely, Western human rights organizations are increasingly infiltrated and controlled by Mohammedans, one typical example which comes to mind is the revolting performance of Irene Khan, who called Gitmo a ‘Gulag’-,

You may ask
WHO IS IRENE KHAN 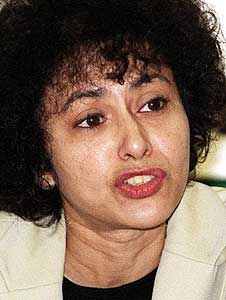 These agents for Islam pervert the very idea of human rights and use their positions to further the Islamic ideology.

Now, as with the world body, the UN, where roughly 20 civilized nations are regularly outvoted by some 160 (or more un-) civilized nations, where most of the votes are bought and sold by and to our Arab masters, the Geneva based UN Human Rights Council is even more an utterly corrupt circus.

What remains is an insult to the very idea on which the human rights organization was founded. Last Monday we featured video of an amazing speech to the United Nations Human Rights Council by Hillel Neuer of UN Watch, in which Neuer blasted the hypocrites and despots of the Council and then was threatened with having his statements removed from the record, by a furious council president.

Here is an updated version:

The United Nations Human Rights Council was back at work today, doing the bidding of the Organization of the Islamic Conference and condemning the criticism of Islam.

With a not-too-subtle hint that the press had better fall in line too.

GENEVA (Reuters) – The United Nations top human rights body condemned “defamation” of religion on Friday and, in an apparent reference to the storm over the Prophet cartoons, said press freedom had its limits.

With the support of China, Russia and Cuba, Moslem and Arab states comfortably won a vote on the 47-state Human Rights Council to express concern at “negative stereotyping” of religions and “attempts to identify Islam with terrorism.”

“The resolution is tabled in the expectation that it will compel the international community to acknowledge and address the disturbing phenomena of the defamation of religions, especially Islam,” said Pakistan, speaking on behalf of the Organization of the Islamic Conference.

The resolution was opposed by Western states which said it focused too much on Islam. The job of the Council was to deal with the rights of individuals not religions, they said

Yes. Muslims concerned about the “defamation” of Islam should fight against violent jihad and Islamic supremacism. To point fingers at non-Muslims in this, when Muslims on virtually a daily basis commit acts of violence and justify them by Islamic precepts, is arrant hypocrisy.
All they want is that we shut up and die. We won’t.

* Robert has an update on this here